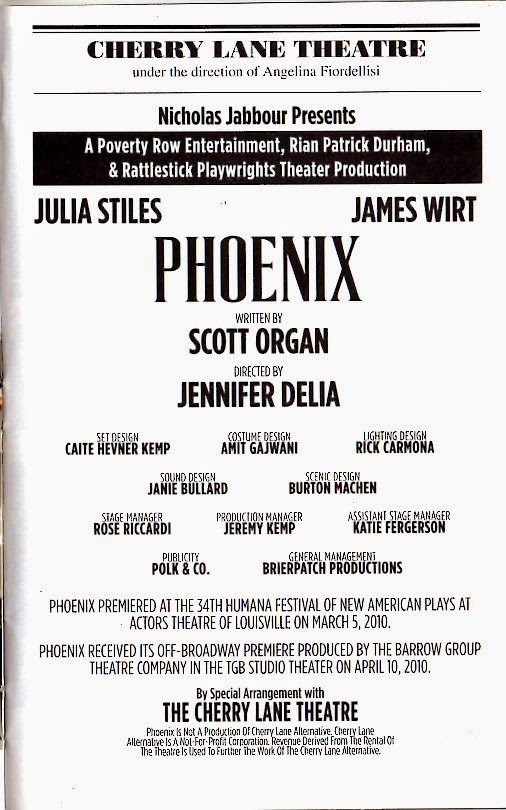 In Scott Organ’s PHOENIX, at the Cherry Lane Theatre, Sue and Bruce are two attractive New York singles in their thirties who met in a bar and hooked up for the night. Not long after (a month to him, four weeks to her), she calls and arranges to meet him in a coffee shop where, trying to be coolly businesslike, she points three things out to him: 1) she likes him, 2) she doesn’t want to see him again, and 3) she’s pregnant. Thus begins this mildly amusing, six-scene, boy meets girl, boy loses girl, boy gets girl rom-com, which had its world premiere at the 2010 Humana Festival in Louisville, and was done by the Barrow Group during the 2009-2010 season. 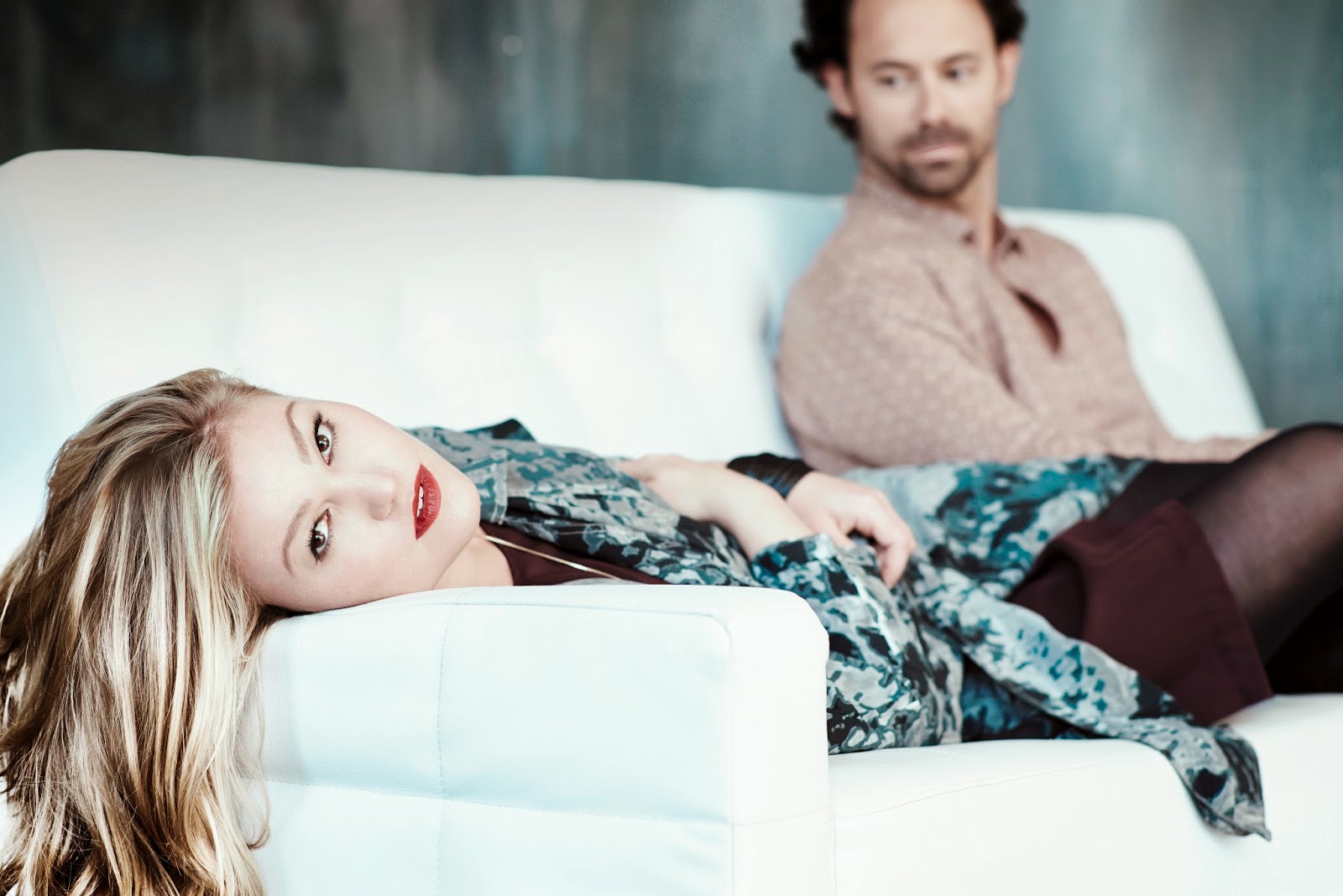 
For many, the big reason to pay attention to this slight and sporadically diverting two-character, 90-minute piece is the presence of movie star Julia Stiles as Sue. She’s paired with the lesser-known up-and-comer James Wirt in a work that survives principally on its often sprightly, smartass repartee. Sue is a woman with enormous commitment issues, and Bruce is a pleasant, intelligent guy, always ready with a smart retort. He appears not to have any looming skeletons in the closet (although he does reveal a tragic experience) to prevent any girl with half a brain and a functioning libido from being attracted to him. He’s obviously cool, since he covers his trim physique (when he’s wearing clothes) in tight jeans and polo shirts, and has a fashionable five o’clock shadow. Sue is supposed to look equally en vogue but costume designer Amit Gajwani has given her a decidedly unflattering wardrobe.

Sue’s a traveling nurse, a sign of her inability to put down roots, while Bruce is . . . well, I have no idea of what he does for a living, but he seems a pretty together dude without obvious job or financial burdens. Sue’s set on having an abortion and only came to tell Bruce of her pregnancy because he'd informed her of his inability to have kids. Naturally, discovering that he’s actually fertile comes as a shock. Despite learning he’s a prospective father, he’s the kind of decent fellow who, despite his inclinations, won’t insist that Sue have the baby. Still, he gets her to let him be at the abortion clinic when she’s scheduled to have the procedure. This, it turns out, is in Phoenix, Arizona, and to get there, he chooses to drives across the country. When Sue asks him where he’s staying, his answer is the Taurus (the car, get it?). 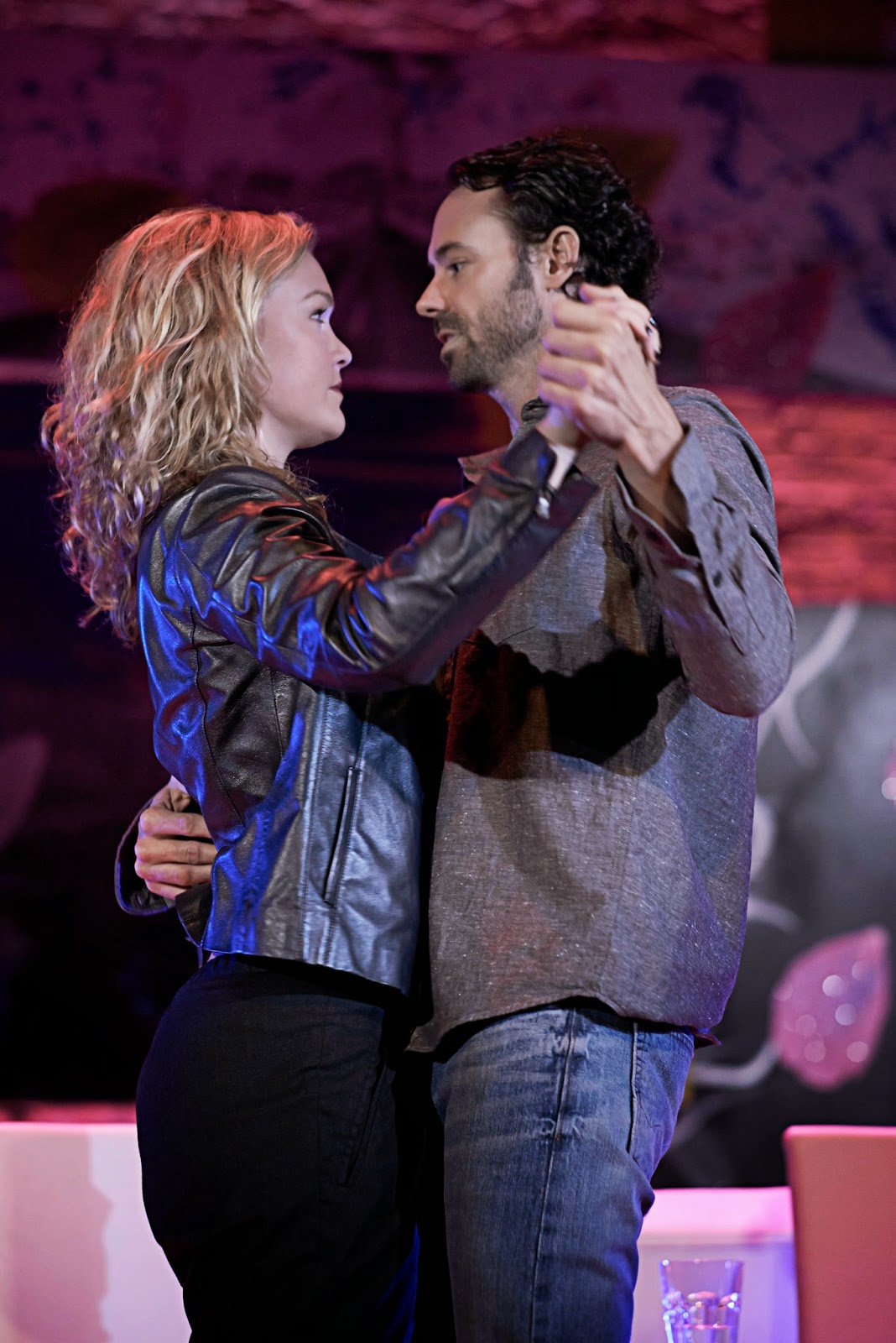 
As Bruce and Sue circle warily around her imminent procedure, Bruce, who sees the potential not only of fatherhood but of his relationship with Sue, begins to suggest that maybe she could reconsider; although he makes a heartfelt plea to at least discuss the issue, Sue blows her stack and orders him to leave. Things were going too smoothly, of course, and, following the formula, the playwright needed to find a reason for boy to lose girl. Some time passes, and Mr. Organ brings the couple back together again, with consequences I don’t think will greatly surprise anyone.


Several dialogue sequences fill the space with witty jousting, one concerning condoms beyond their expiration dates (look closely at the program cover for an extension of the condom japery) and another inspired by talk of time travel, but they’re little more than filler for a mostly nutritionless confection. This is the kind of dramedy that lives or dies on the charm and chemistry of its actors. Despite their pleasing personas, neither Ms. Stiles nor Mr. Wirt bring anything unique to their performances, which seem as generic as the play they’re in. I was watching a lovely 1938 Jimmy Stewart-Ginger Rogers movie the next morning on TCM, THE VIVACIOUS LADY, and was struck by the seemingly effortless warmth, depth, and charisma of the two stars as they met and fell in love. There was a uniqueness to their presences that made me feel these were the only actors who could fit these roles. With PHOENIX, the impression is that dozens of actors could play these cookie-cutter parts.


Jennifer Delia’s direction isn’t of much help, nor is Caite Hevner Kemp’s unit set. Ms. Delia attempts to squeeze some juice out of Ms. Stiles’s performance by giving her lots of busy stuff to do. In the opening coffee shop scene, Ms. Stiles jumps up on a chair to emphasize her lines. (Typical Starbucks behavior, you say?) In another scene, where Sue and Bruce are each in their apartments talking to the other on the phone, Ms. Stiles romps through a series of yoga exercises, including standing on her head, chatting all the while. And in another, she dances around as if she's auditioning for “So You Think You Can Dance.”  All of which are surely distractions designed to compensate for the thinness of the role and the actress’s need to pump up her appeal.


Because the same furniture, a white couch with two white chairs placed behind and facing away from it, is used for each scene, Ms. Kemp places these pieces on a square platform rotated in semidarkness before each new scene begins. To cover these shifts (and the several costume changes), each scene ends with a blackout, followed by a beat before the lights (designed by Rick Carmona) come up slightly as pop music (credited to Leisure Cruise) plays and a shadowy figure (Mr. Wirt?) pushes the stage into its new alignment. These scenes slow down what should be a much more upbeat tempo; they put an emotional drag on the play’s comedic sensibility.


This is the first show I’ve seen where one person, Ms. Kemp, is credited with “set design” and another, Burton Machen, with “scenic design.” Mr. Machen’s program bio lists him as “scenic artist,” further complicating the billing, but what it boils down to is that he contributed the half dozen collage-style paintings that form the show’s backdrop, hanging in front of the brick stage wall. It can’t be said that they add much to the production.


If you’re a Julia Stiles fan, this is a good chance to see her up close in a small Off-Broadway venue. PHOENIX will not detract from your respect for her as an intelligent and likable performer. But it won't add much either. As rom-coms go, this is one PHOENIX I don't think will soon be rising from its ashes.
Posted by Samuel L. Leiter at 5:13 PM