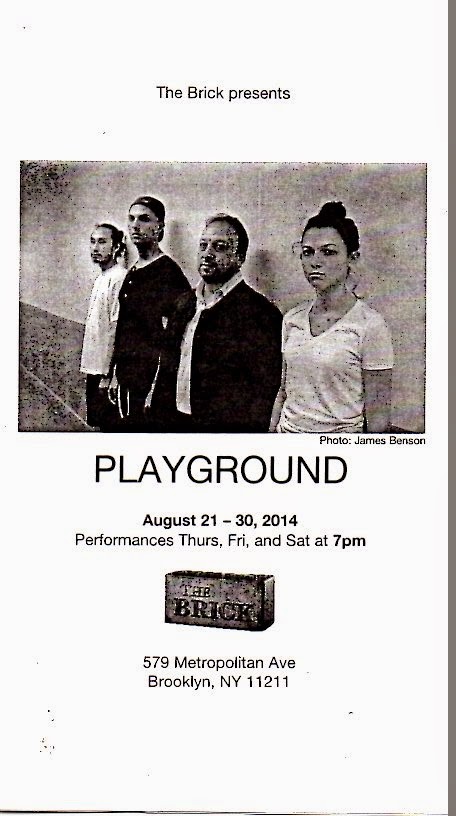 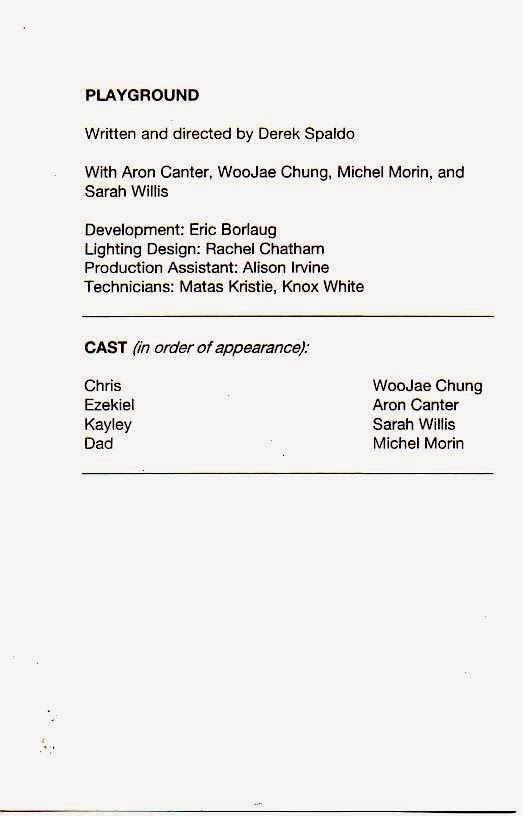 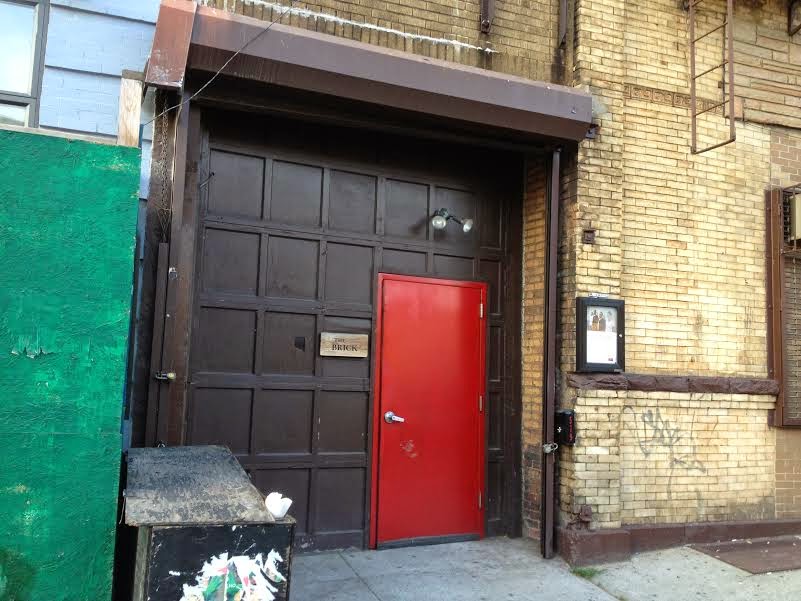 The Brick, 579 Metropolitan Avenue, Williamsburg, Brooklyn.
My first trip to The Brick, a tiny storefront theatre on Metropolitan Avenue in Williamsburg, was to see Derek Spaldo’s comedy-drama PLAYGROUND, which he also directed for its brief run of less than two weeks. The funky neighborhood is the ideal environment for Mr. Spaldo’s play, set largely in a Brooklyn bodega. PLAYGROUND is oddly engrossing despite all the ways it subverts our familiarity with conventional realistic dramaturgy and performance. Mr. Spaldo, who’s from Rutherford, NJ, cites iconoclastic writer-director Richard Maxwell as one of his influences. [Note: Mr. Spaldo has informed me in an e-mail that, while he has worked with Mr. Maxwell, "there is no specific language in any of our press releases that references Mr. Maxwell as an influence." I stand corrected; what follows, then, is my assumption of an influence, based on what I saw, and not on anything Mr. Spaldo has specifically acknowledged.] In an article called “Richard Maxwell and the Paradox of Theatre,” British academic Theron Schmidt discusses Mr. Maxwell’s work.
The seemingly simple aesthetic form of performances by Richard Maxwell and the New York City Players, in which actors speak and move with minimal emotional affectation and in which the scripts are constructed largely out of apparently insignificant elements of everyday speech, seems to baffle academic and popular critics alike. We read into these choices a set of apparent contradictions and paradoxical strategies which seem to challenge our conception of how theatre works. So Philippa Wehle in Theatre Forum and Robin Pogrebin in the New York Times both grapple with the curious way in which they come to have emotional investment in the characters in Maxwell’s plays, with Wehle asking “what is the appeal of these curious stock figures who barely move and who deliver their mundane monologues in a flat monotone […]?” (75) and Pogrebin puzzling that “[s]omehow the less demonstrative their behavior, the deeper they seem” (1). Paradoxically, [the characters]and their troubles seemed unusually vivid and moving.”
I’m not very familiar with Maxwell, and I don’t intend to make a close comparison of Mr. Spaldo with him, but I can verify that Mr. Spaldo’s play corresponds in a number of ways to what Mr. Schmidt just described. 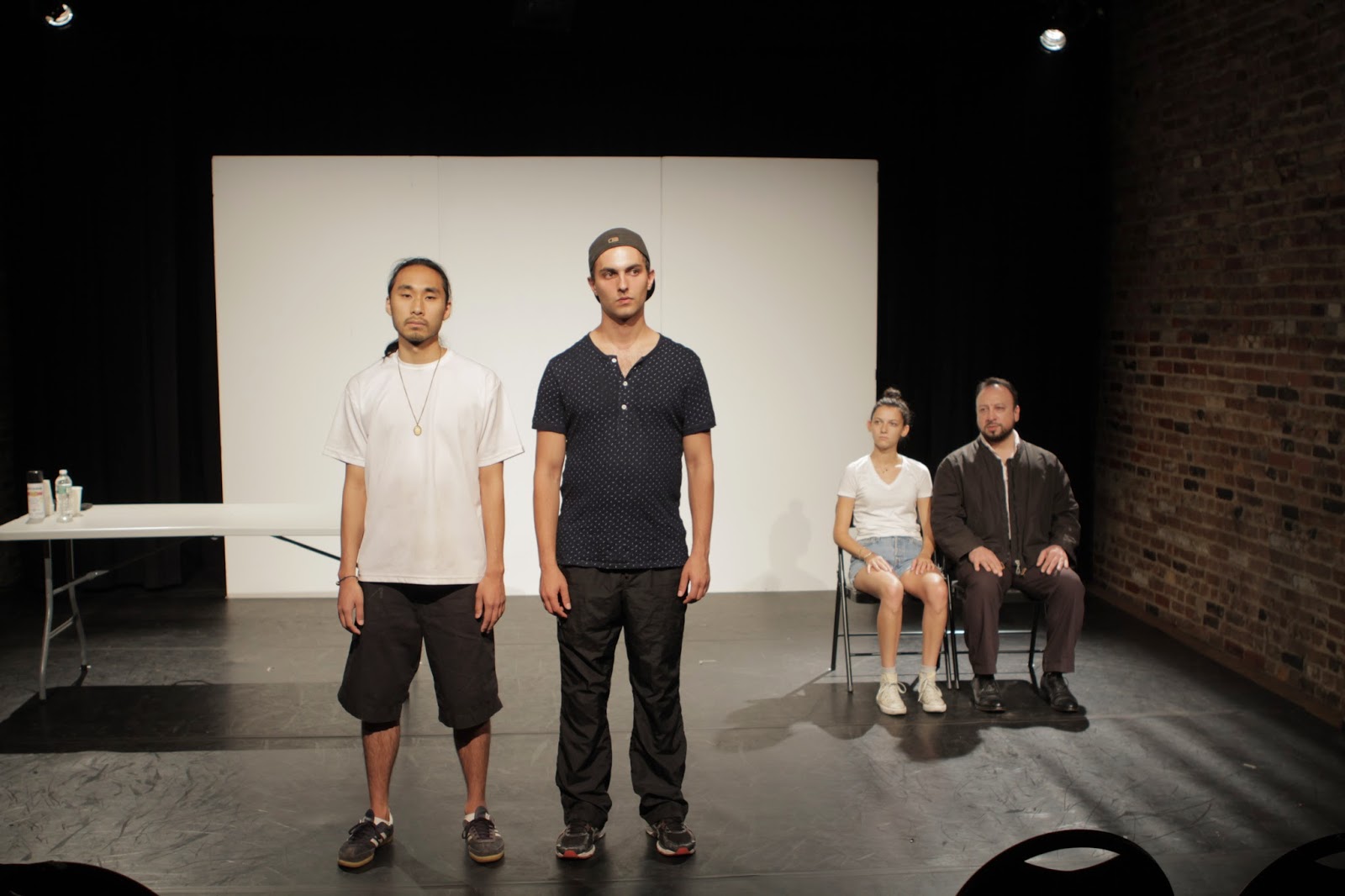 From left: WooJae Chung, Aron Canter, Sarah Willis, Michal Morin. Photo: James Benson.
Let’s set the scene: the interior of The Brick is the standard one shared by many tiny Off-off venues, a narrow room, once a commercial establishment, boxed in by brick walls, with around 50 seats on risers. The seats face a spare acting space with a simple white panel for a backdrop, a rectangular folding table at stage right, a folding chair against the stage right wall, and two folding chairs upstage left. The only scenery visible is in your imagination, if even there. A few items, including a bottle of water, are on the table.
The four characters are a scruffy, Korean-born high school senior and bodega employee named Chris Spinella (WooJae Chung); Chris’s 22-year-old bodega coworker, Ezekiel (Aron Canter); a girl in Chris’s English class, Kayley (Sarah Wills); and Dad (Michael Morin), Kayley’s father, who owns a gas station/garage. When the play begins and the lights (designed by Rachel Chatham) come up sharply, Chris and Ezekiel are standing next to each other, nearly shoulder to shoulder, facing front, holding a very, very long pause. After the dialogue begins, the actors, who are close enough physically to the characters they play to sustain credibility, generally perform while standing more or less rigidly, usually while facing the audience, and moving in semi-robotic fashion. The dialogue isn’t spoken robotically, however, and is usually inflected with believable emphases and intonations, but the very deliberate pacing and limited movement create a heightened reality that draws you in and grabs your attention. A fight toward the end is staged with deliberately simulated punches and kicks, yet, because it doesn’t hide its artificiality, is more powerful than many ambitiously realistic stage combats directed by specialists.
Surprisingly, given the dramatic flaccidity of the characters and plot, this formalized staging makes you focus more than you might expect on what the characters are saying. On the other hand, PLAYGROUND thankfully concludes after 50 minutes; any longer and longeurs would have set in.
In an interview, Mr. Spaldo mentions his use of overheard speech as the basis for at least some of his dialogue. This gives the characters an abundant pool of authentic street talk, replete with the familiar profanities. On the surface, the conversations are about nothing of importance, but there are subtextual streams exploring—no, let’s make that expressing— issues of masculinity, parental responsibility, and personal aspiration among those with dead-end occupations. Just because they're there, though, doesn't mean these issues offer any form of enlightenment. The plot, which leads to an act of violence, is more like several slices of life (thin ones, at that) than a carefully constructed enterprise with fully articulated people. We learn as much as we need to know to sustain dramatic interest and then, with no clear problem having been set forth and no clear resolution to what appears to be an evolving relationship between Chris and Kayley, the play simply ends.
Here's a rough plot outline: Chris and Ezekiel, on a bus, talk about this and that, mainly Chris’s ex-girlfriend and the frequency with which Ezekiel masturbates. Kayley tells Dad that she’s enjoying school. He wants her to work at his gas station this weekend and she wants to go to a dance. Chris and Ezekiel chatter at the bodega about their unseen boss, Daveed, and about strategies for picking up girls. Kayley enters and recognizes Chris from class. He says he wants to "fuck" their teacher, to which she registers mild distaste. Dad complains about problems at his business; the work versus dance conflict returns. Dad goes to the bodega and asks for Daveed but is treated rudely by Chris. Chris later tells Ezekiel that Dad, a total stranger, might be gay; a mildly comic back and forth about homophobia and racism ensues. Kayley’s dance night is spoiled when her friend backs out. She’s not feeling well, so Dad, whose driving license has been suspended, is forced to pick her up by cab. Chris tries to kick Dad and Kayley out of the store. Chris mimes spray painting a wall (which I think is supposed to represent Kayley’s car). Kayley says Dad is mentally ill (although no sign of this has been visible). Dad fights with Chris and Ezekiel knocks Dad out. Chris apologizes, sort of, concluding with coarse references to Kayley’s body. The typically affectless Kayley says, “I don’t know how to respond to that. You hurt me.” Curtain.
The characters, despite their artificially imposed movements and demeanors, seem somehow familiar, but in a creepy way. They remind you of people you’ve encountered somewhere, but not of anyone you want to know. Creepiest of all is the ponytailed Chris with his disaffected attitude, his disregard for social niceties, his mumbled crudity and stupidity. The neon question of why a Korean born man raised in Flushing is called Chris Spinella is never raised, adding another layer of bizarreness to the goings on. Fortunately, Mr. Chung captures just the right note of alienation and cold arrogance to make Chris chillingly yet fascinatingly repellent. Almost as weird in a different way is Ms. Willis’s Kayley; at first, she seems the most sympathetic and redeemable character, but, despite her mild protestations at Chris's nastiness, and the tension in her relationship with Dad, she remains essentially disengaged, even when her father has been beaten to a pulp.
All the actors are fully committed to Mr. Spaldo’s approach, making the experience that much more problematic. You want to dismiss the play as shallow hokum but its peculiar atmosphere denies you the opportunity. Nonetheless, Mr. Spaldo’s style has severe limitations, and unless he has more substantial material with which to exercise it, I fear there'll be more brick walls in his future.
Posted by Samuel L. Leiter at 3:06 PM