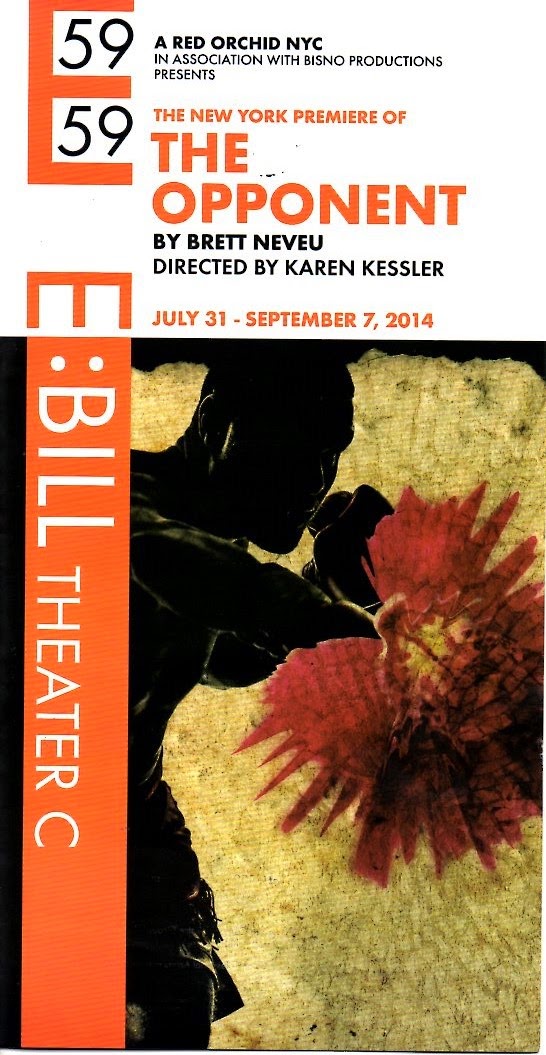 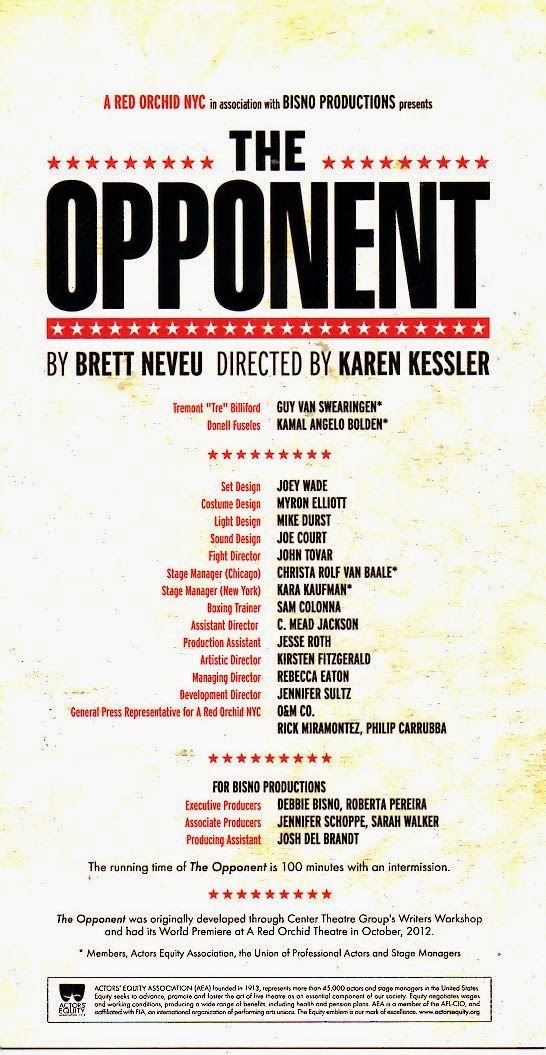 THE OPPONENT, Chicago playwright Brett Neveu’s K.O. of a drama at 59E59, tops the list of over half-a-dozen plays about boxers and boxing on New York stages over the past two years. The soon-to-be retired ROCKY is the most obvious, of course, but let’s not forget the Broadway revival of GOLDEN BOY and the Off-Broadway stagings of FETCH CLAY, MAKE MAN, CHERRY SMOKE, and TYSON VS. ALI, not to mention Broadway’s KINKYBOOTS, whose transvestite hero is a trained fighter, and the Off-Broadway revival of DONNYBROOK, about a pugilist who quit after killing a man in the ring. Mr. Neveu makes good use of the metaphoric associations of boxing to tell a story that he says “seeks to understand the profession of ‘boxer’ and the toll that the profession takes on the body, mind and soul. The play also discusses themes outside the ring; themes of fathers and sons, individual responsibility and how protecting one’s pride can damage those one professes to care about.” 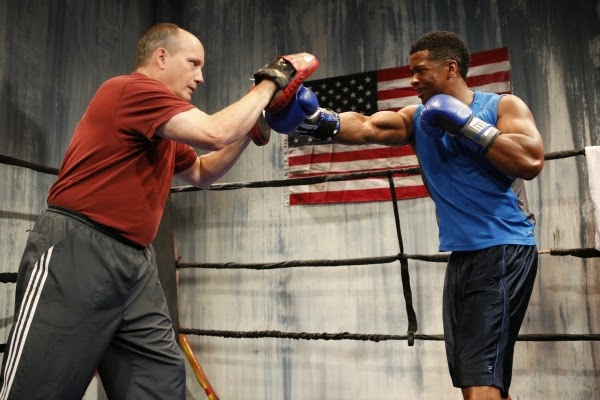 
The tiny Theatre C at 59E59, which seats around 60, and is often used for scenically spare plays and cabaret shows, has been radically transformed by designer Joey Wade into the dingy Rock and Anvil Boxing Gym in Lafayette, Louisiana, with the main acting space occupied by an actual boxing ring, and the walls—covered with a shabby American flag and faded posters of old matches—painted to resemble grimy concrete. The acting takes place both in the ring and in the cramped spaces between it and the audience, which surrounds the ring on two sides. When a character does his lightning-fast rope jumping exercises, it’s right in the midst of the audience, seated only inches away. Rows of circular metal lamps, used by lighting designer Mike Durst to create just the right grimy atmosphere, hang from above. 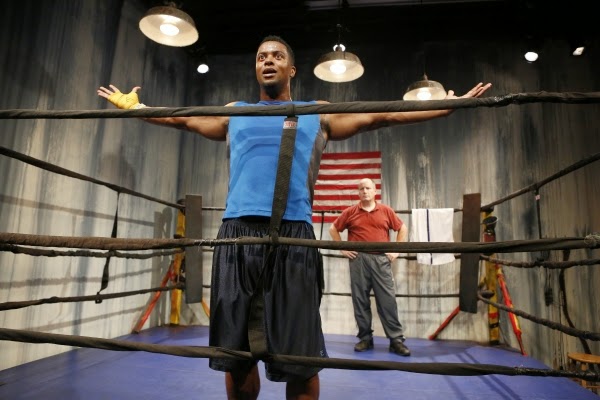 
THE OPPONENT is more a play of character and ambience than plot. In the first act, the 20-year-old Donell is training for a fight with rising star Jas Dennis. Putting him through his paces in the ring is the 45-year-old Tre, usually with training pads on his hands that Donell hits in a series of bam-bam repetition exercises. These sequences, which take up a considerable amount of stage time, are remarkable exhibitions of athletic acting, performed with rapid-fire punching.  Given the apparent power of Mr. Bolden—whose arms are as thick as battering rams—these blows must sting like a bee, even through the pads.


The combinations are sometimes rather complex and there’s a lot of bobbing, weaving, and ducking in these precisely choreographed scenes that spell imminent danger if someone moves the wrong way. Making the sparring exercises even more impressive is the ongoing dialogue between Donell and Tre as they work out their interpersonal issues as trainer and fighter, all the while throwing, catching, and deflecting pounding blows. The popping sounds of leather upon leather punctuate the words with rhythmically precise timing. The physical contrast between the young, black cruiserweight with the bulging biceps and the balding, middle-aged white trainer (and former boxer) is belied by Tre’s considerable agility, vigor, and boxing knowhow.
In act two, set five years later, the men have slowed down a bit, which doesn’t prevent them, near the end, from getting into a full-fledged fight that ends with something of a shock. A very respectful nod must be made in the direction of boxing trainer Sam Colonna, and John Tovar, the stage fight specialist who has created a bout of fisticuffs that comes as close to realism as possible within the confines of such close quarters and the need to protect the actors from harm.


Mr. Neveu’s lingo studded, largely staccato dialogue is principally about boxing, and, while I don’t make it a practice to hang around boxing gyms, smells to me of raw authenticity, like the sweat coming off these actors' bodies; some of the chatter is vague, but the actors speak it with complete naturalness. Aside from the training process, not much happens in a conventional sense in act one, as Tre and Donell talk about local boxers and managers, and comment on Donell’s physical and psychological readiness for that evening’s fight. There’s also much about “moving up” in the fight business, climbing the rungs of the ladder. The men's conversation is a sort of spoken correlative of their sparring, shifting directions emotionally as various topics intrude, such as Donell’s level of confidence and his desire to beat Jas Dennis so he can deprive him of all the signs of success he’s been able to acquire. There’s a tension between Donell and Tre that now and then turns bitter, some of it turning on Donell's desire for the reluctant Tre to see his fight and visit his dressing room afterward.  The reasons for the characters' respective hostilities are often fuzzy, but there’s also mutual respect, suggesting a father-son relationship, although few personal details about either of these emotionally needy characters are provided.


Tre’s big career moment was a championship fight in which he lost by a TKO; he uses the fact that he got up when knocked down as his mantra for what makes a good fighter; getting up when you’re down becomes a thematic throughlines. For Tre, boxers must avoid at all costs becoming what he calls “a low-class fighter, a goddamned road-dog.” Donell picks up on something Tre says that suggests he’s weak; to the sensitive Donell, Tre thrives on getting boxers to lose their confidence. As Donell tells Tre: “You always want fighters movin’ up how you want it moved and if you don’t see ‘em getting it the way you see it, even for just a quick second they don’t do what you think they should, if they don’t hear it or do it or try to read your mind, you write ‘em off.”


This issue rises again in act two, when Donell, who hasn’t seen Tre since the fight he was about to have in act one, returns; Tre behaves at first as if he doesn’t know him. Donell, now obviously a “road-dog,” is 25, married and with a kid. He’s got a losing record, and a fight coming up, so he comes to Tre for help, but he’s more likely seeking either something else. Tre, for his part, hasn’t done much better, running a dilapidated gym with few fighters and lousy equipment. The men resume their verbal sparring, whose lightning jabs are matched when they put on the gloves, leading to their climactic brawl and a deeper understanding of Tre's behavior.


The rough, often crude, and sometimes elliptical dialogue is spoken with total conviction. Mr. Bolden mingles petulance with dignity in his portrayal of the feisty boxer. The enigmatic, dour Mr. Van Swearingen, speaking in a thick--sporadically incomprehensible--Louisiana accent, bears a physical and vocal resemblance to Robert Duvall. He looks nothing like a conventional boxer (although the actor was a professional firefighter) but his deft moves force you to suspend your disbelief. Few actors get the workout these two go through every night, and by the time the play ends, you’ll feel your heartbeat quickened along with theirs. I doubt theatergoers will be throwing the towel in on THE OPPONENT.
Posted by Samuel L. Leiter at 8:09 PM