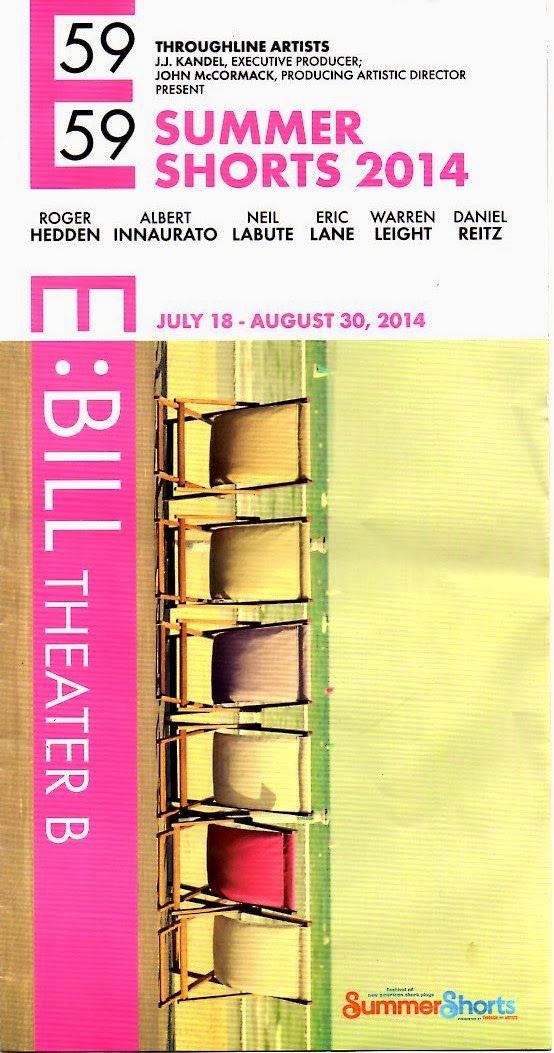 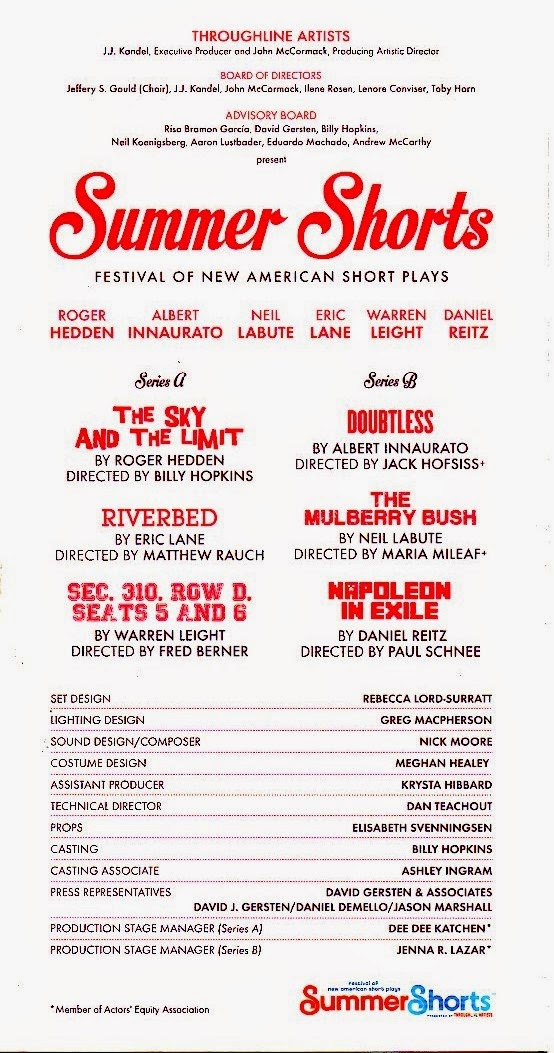 The second evening of one-acts in this year’s SUMMER SHORTS program at 59E59 Theaters, identified as Series B, includes new plays by two well-known playwrights, and one not yet as notable. The latter, Daniel Reitz, provides the second best play, “NAPOLEON IN EXILE,” while the best piece, “THE MULBERRY BUSH,” is by the solidly established, and often controversial, Neil LaBute. As for the weakest, and weak is not a strong enough word, we have “DOUBTLESS,” the once very popular Albert Innaurato’s return to playwriting after an absence of a quarter of a century.


The program begins with “NAPOLEON IN EXILE,” directed by Paul Schnee, a two-hander about Evelyn (Henny Russell), the middle-aged mother of Corey (Will Dagger), a 25-year-old compulsive player of the video game “Mindcraft.” Evelyn, diagnosed with cancer, wants to feel that the maturity-challenged Corey is growing up and taking responsibility for his life. Bright as he seems to be, his lack of social skills prevent him from holding down even menial jobs, like cleaning toilets in an old age home; his future without Evelyn seems bleak, although he’s not ready to deal with this, or with any other real life problems; thus his total immersion in the fantasy world of violent video games. He’s also “a little tyrant,” a trait that inspires his mom to dub him “a little Napoleon.” 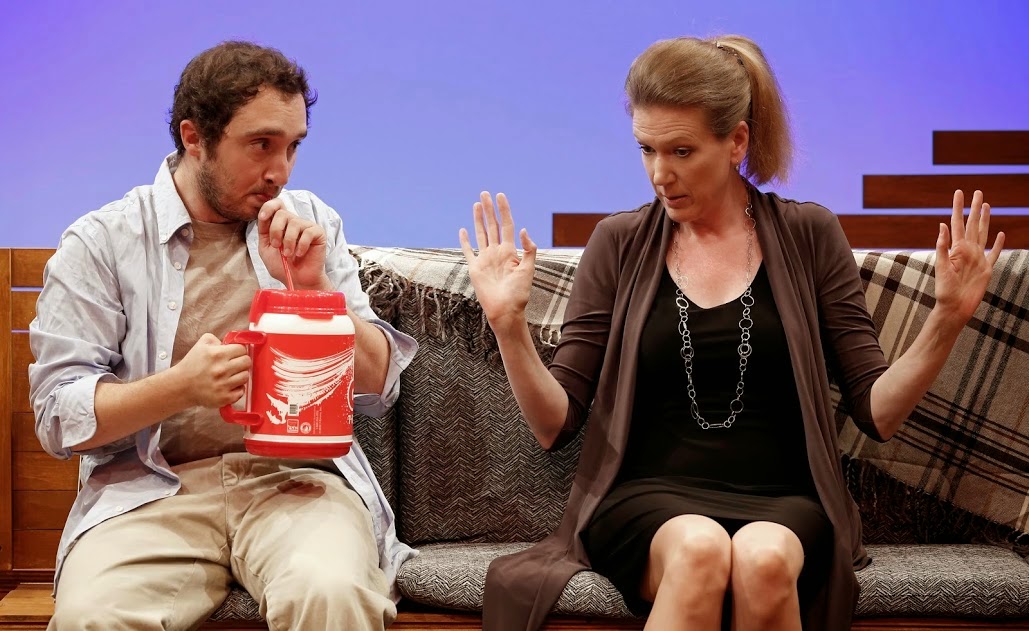 
Ms. Russell gives a subdued, touchingly interiorized performance of Evelyn, who must struggle to communicate with her difficult son while facing her own mortality; she does so with a graceful blend of steel and velvet. Mr. Dagger plays Corey with a “Rain Man”-like affect, making it hard not to see him as mildly autistic in the idiot savant mode (he shows considerable dexterity with numbers). His wide eyes, baby face expressions, and slightly slurred speech are well done, but the play never tries to explains his condition, which is a given we must accept.


Second on the bill is Mr. LaBute’s “THE MULBERRY BUSH,” which brings no other play to mind so much as Edward Albee’s THE ZOO STORY. It’s a beautiful day in the park, and we see two benches. On one, there to eat his lunch, sits Bill (Victor Slezak), a nice-looking middle-aged man, clean-cut, and appearing every inch the model citizen. Seated next to him is Kip (J.J. Kandel), a somewhat younger man, who slowly strikes up a friendly conversation with Bill, although the older man, while polite, is reticent. A healthy chunk of dialogue consists of nothing but Bill and Kip deciding the difference, if any, between sprinkles and jimmies on an ice cream cone. All of this leads to Kip’s becoming, like Albee's Jerry, increasingly menacing as he pokes away at Bill’s well-mannered demeanor to expose his past history, which Kip thinks represents a threat that must be stopped. There's a brief but vivid bit of near-violence, and at the end, we must determine how we feel about Bill and what he’s been through. 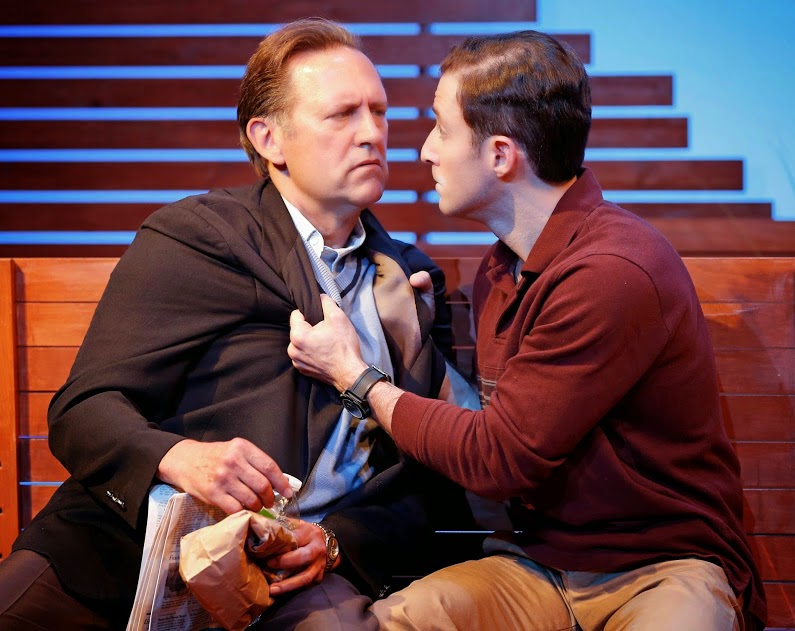 Victor Slezak, J.J. Kandel. Photo: Carol Rosegg.
“THE MULBERRY BUSH” is certainly not a masterpiece like Albee’s play, but its taut and slow-burn style, with casually dropped in hints of the tension eating Kip, make it fairly gripping. Much credit must go to director Maria Mileaf for building the suspense as effectively as she does, and to the splendid actors, Mr. Slezak and Mr. Kandel, for playing their objectives so sharply.


Seeing these two plays should be sufficient for many theatergoers; they provide a full enough evening of theatre, and a mostly satisfying one, given the relative rarity of viable new one-acts. However, if audience members have something else to rush off to, I don’t think they need to feel guilty about doing so during the intermission, before the third play begins. In the way of a public service announcement I'd like them to know they'll have to sit through Mr. Innaurato’s “DOUBTLESS.” The title is intended to ignite recollection of the movie version of John Patrick Shanley’s DOUBT, starring Meryl Streep as a mother superior.


“DOUBTLESS,” which comes off as a very poor man’s version of a Christopher Durang farce, seasoned with a heavy dose of Theatre of the Ridiculous, is a tasteless, blasphemous, and pathetically stale satire on the Catholic Church, among other hit-or-miss subjects. After witnessing it, my theatre companion, a professional director, couldn’t help texting me: “I . . . nominate that show for the worst play EV. ER.” To be honest, I’ve seen worse, but it’s no exaggeration to declare that “DOUBTLESS” is at the bottom of the new season’s barrel.


Mr. Innaurato gives us two hugging, kissing, ass-grabbing, lesbian teaching nuns, Sister (Tasha Guevara) and Mother (Brenda Currin), both fully decked out in habits and wimples (Sister has upgraded her ensemble with gold high-top sneakers). The couple is preparing to run off together once Father (Andrew Glaszek) and Brother (David Beck) bring them the money and a Lamborghini Aventador. Meanwhile, as they huddle in a corner of a New York Catholic complex, the priests are engaging offstage in an Opus Dei orgy, where they’re having trouble finding, as they say, “salamis big enough for [Supreme Court Justice Antonin] Scalia’s asshole.” Hey, you won’t mind if I skip the plot summary and not have to relive it, will you? 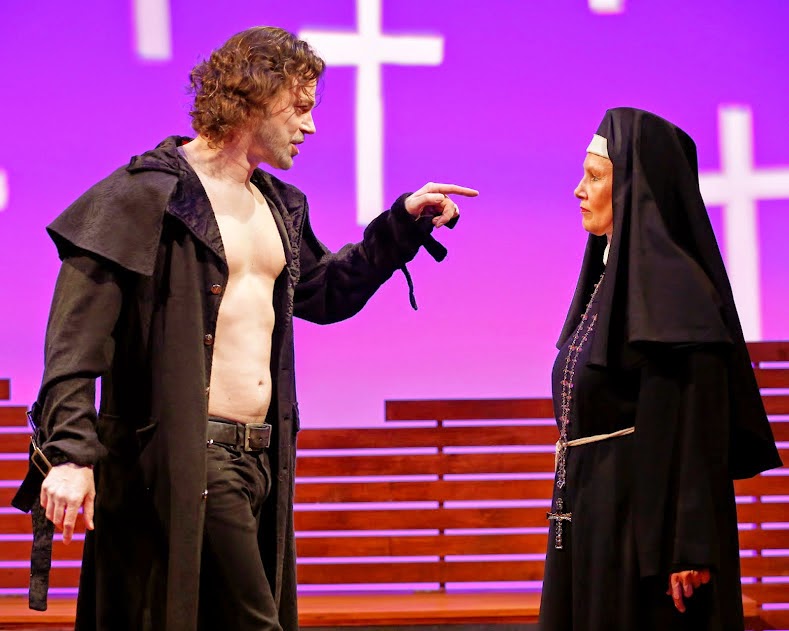 
Let’s just say much of the play deals with the presence of Jesus (Dana Watkins), a hunky, bare-chested vampire in the sexy Dracula tradition, and that there’s gobs of dirty talk; religion-bashing; quips about priestly perversions; a gay priest and brother in black tight shorts who wear clerical collars the way Chippendale dancers wear bow ties; anti-Republican diatribes; silly jibes aimed at Justin Bieber, Anne Romney, and Meryl Streep; campy references to Broadway musicals; the clichéd use of Philadelphia as a punching bag; ethnic quips at the expense of Italian-Americans; and tediously unfunny banter that thinks referring to THE BELLS OF ST. MARY’S as THE BALLS OF ST. MARY’S is droll, or that the way to lay them in the aisles is to call the medieval nun-playwright, Hrosvitha of Gandersheim, the David Mamet of the 12th century. Even if you agree that the targets of the playwright’s satire deserve to be poked, the thrusting is so sophomoric that the blows land like cotton balls.


Really putting the kibosh on “DOUBTLESS” is the ineptitude of the production, about whose lame comedic acting the less said the better, although Mr. Watkins, in an impossible part, manages to retain his thespian dignity while all about him are losing theirs. Like Mr. Innaurato, director Jack Hofsiss, once so successful with plays like THE ELEPHANT MAN (for which he won a Tony), is making a return to the New York stage. To give him the benefit of the doubt, it’s doubtful if anyone could have made this play work, but it’s doubtless that what he has done has only made the situation worse.

Note: An earlier version of this review mistakenly noted that Jack Hofsiss directed VANITIES; the director was Garland Wright, not Mr. Hofsiss.
Posted by Samuel L. Leiter at 4:33 PM