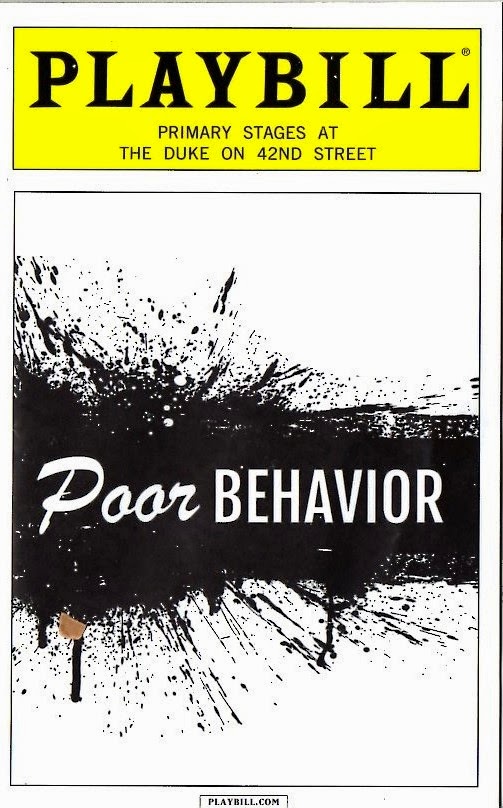 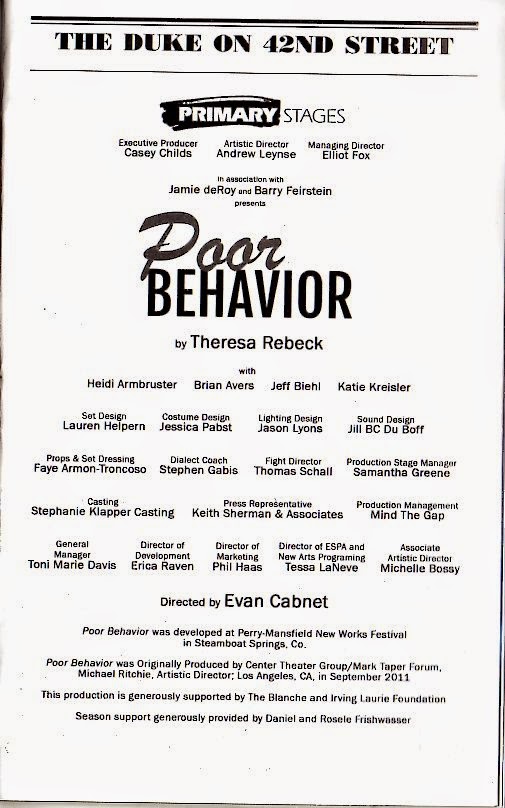 The number of new mainstream shows—those that aren’t part of the several summer festivals—opening in July and August is traditionally small when compared to the rest of the year, but the 2014 crop has been decidedly spare. Theresa Rebeck’s POOR BEHAVIOR, at the Duke Theatre in a Primary Stages production, which I saw last night, was only my sixth show this August; by the same time last year it would have been the 13th. Given Ms. Rebeck’s substantial career as a Broadway and Off-Broadway playwright with 15 significant productions, and her contribution to network TV (the ill-fated “Smash”), there was reason to hope that my return to the aisle after a two-week hiatus would be a rewarding one. Of the over 50 shows I’ve reviewed since the new season began, I can count on one hand the number I strongly recommended. Sad to say, POOR BEHAVIOR will keep my other hand unoccupied. I watched it with increasing tension and discomfort as its four capable actors, working under the direction of Evan Cabnet, struggled with its strained dialogue and awkwardly dramatized situations. Katie Kreisler, Brian Avers. Photo: James Leynse.
There’s nothing earthshakingly original in the play’s essential premise. It’s set in the upstate New York country house (nicely realized in Lauren Helpern’s detailed design) of Ella (Katie Kreisler) and Peter (Jeff Biehl), an Upper West Side couple who’ve invited their friends, Maureen (Heidi Armbruster) and Ian (Brian Avers), up for the weekend. The problem is that Ms. Rebeck’s characters, with the possible exception of one, are so revved up and annoying, and the playwright’s maneuvering of the events so artificial, that you watch with clenched teeth as if you’re biting a bullet to get you through the ordeal. 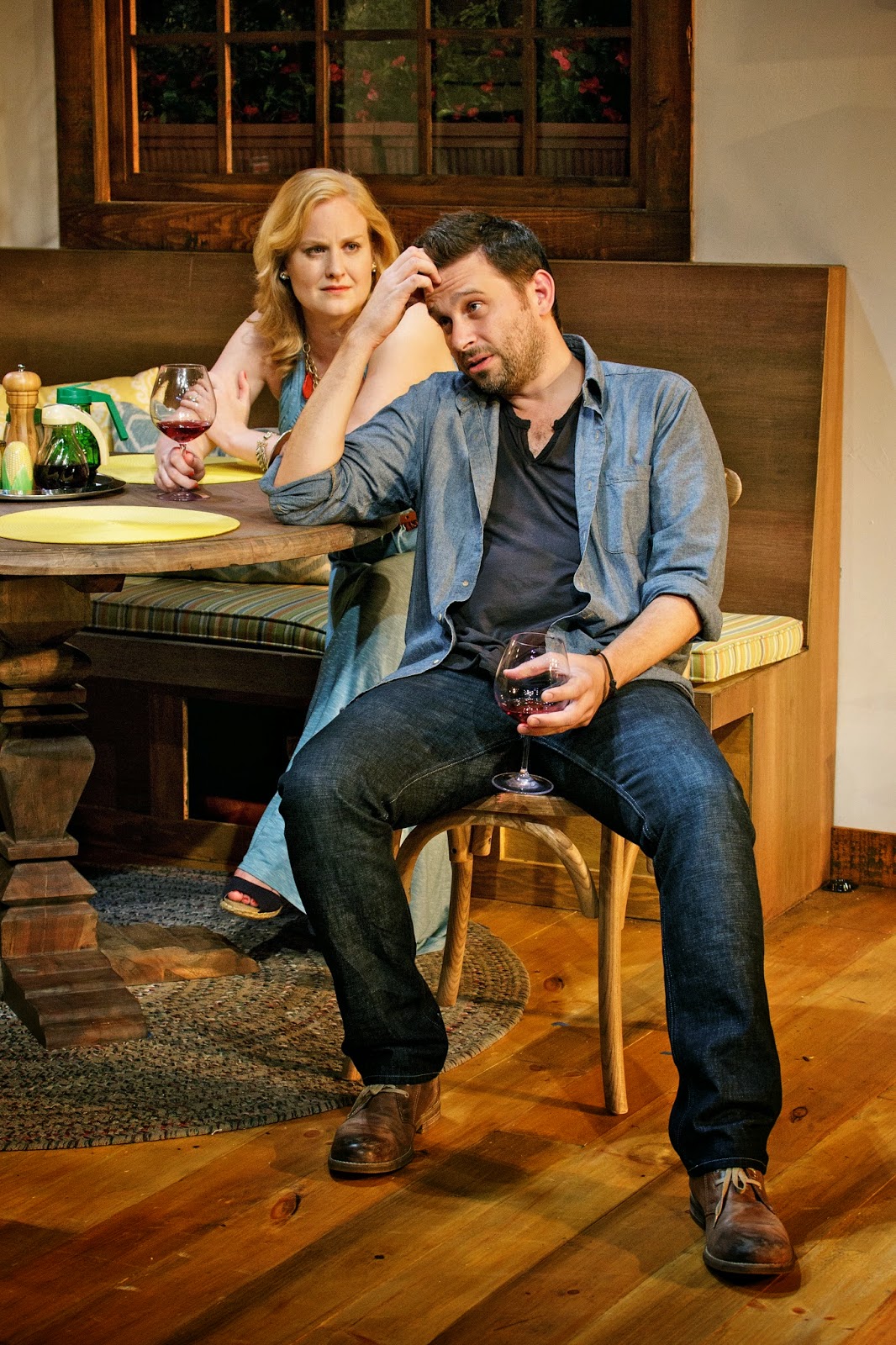 
For starters, much of the action revolves around a bunch of gourmet muffins made from a combination of off-putting ingredients (tomato confit, peach mango, peppercorn, and the like) that Maureen and Ian bring along. Much stage time is devoted to searching for the muffins and mocking their inedibility. The comic business surrounding the eating (and spitting out) of the muffins is tiresomely unfunny, but on the simple level of plausibility it’s impossible to believe that Ella and Peter would have guests over for the weekend with barely any food on hand for the occasion. (After 30 years of vacation home ownership, I know whereof I speak.) Talk about food and tea takes up a lot of stage time (Lipton’s gets a blast from the upscale Ella as “pretend tea”), but, apart from a few muffin chunks nothing goes down anyone’s throat except a whole lot of wine. Peter keeps offering to make scrambled eggs but the only time a frying pan is used it’s for anything but its original intention. 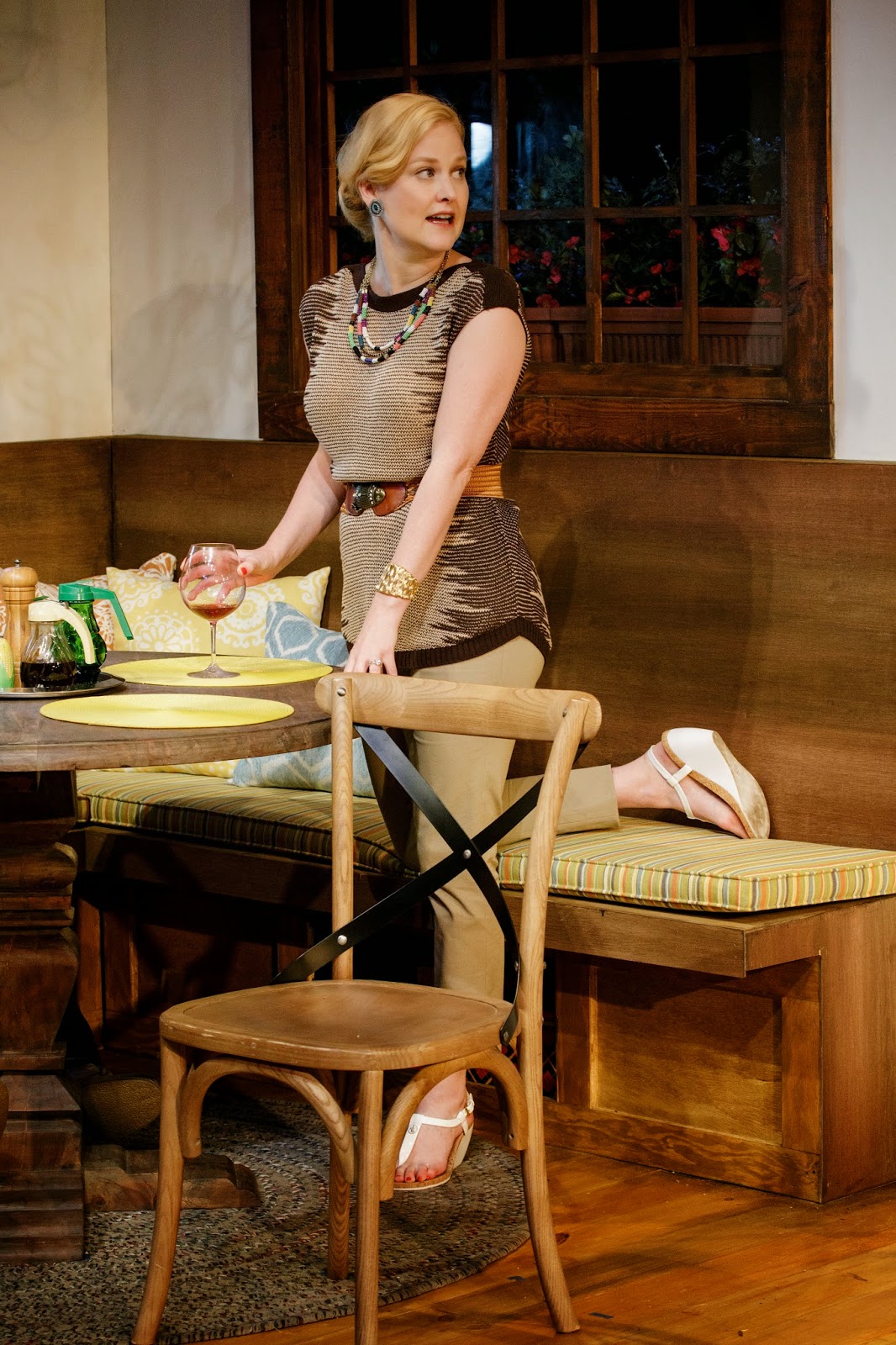 
The play begins in the middle of a late night argument between Ella and the loquaciously provocative Ian, a cynical Irish expat with now standard unshaved macho appeal, about the validity of such terms as “goodness” and “beauty,” words to which the cynical Ian ascribes little meaning; the characters have been guzzling wine all night, but the hifalutin discussion has the empty pretentiousness one usually associates with smoking weed. Ian is especially given to pontificating and philosophizing (Ella later accuses him of lecturing), but most of what he says carries the aroma of blarney; he’s little more than a deft manipulator with an increasingly grating brogue. He sounds like he might be a teacher, but Ms. Rebeck carefully avoids identifying any of the characters by what they do for a living. 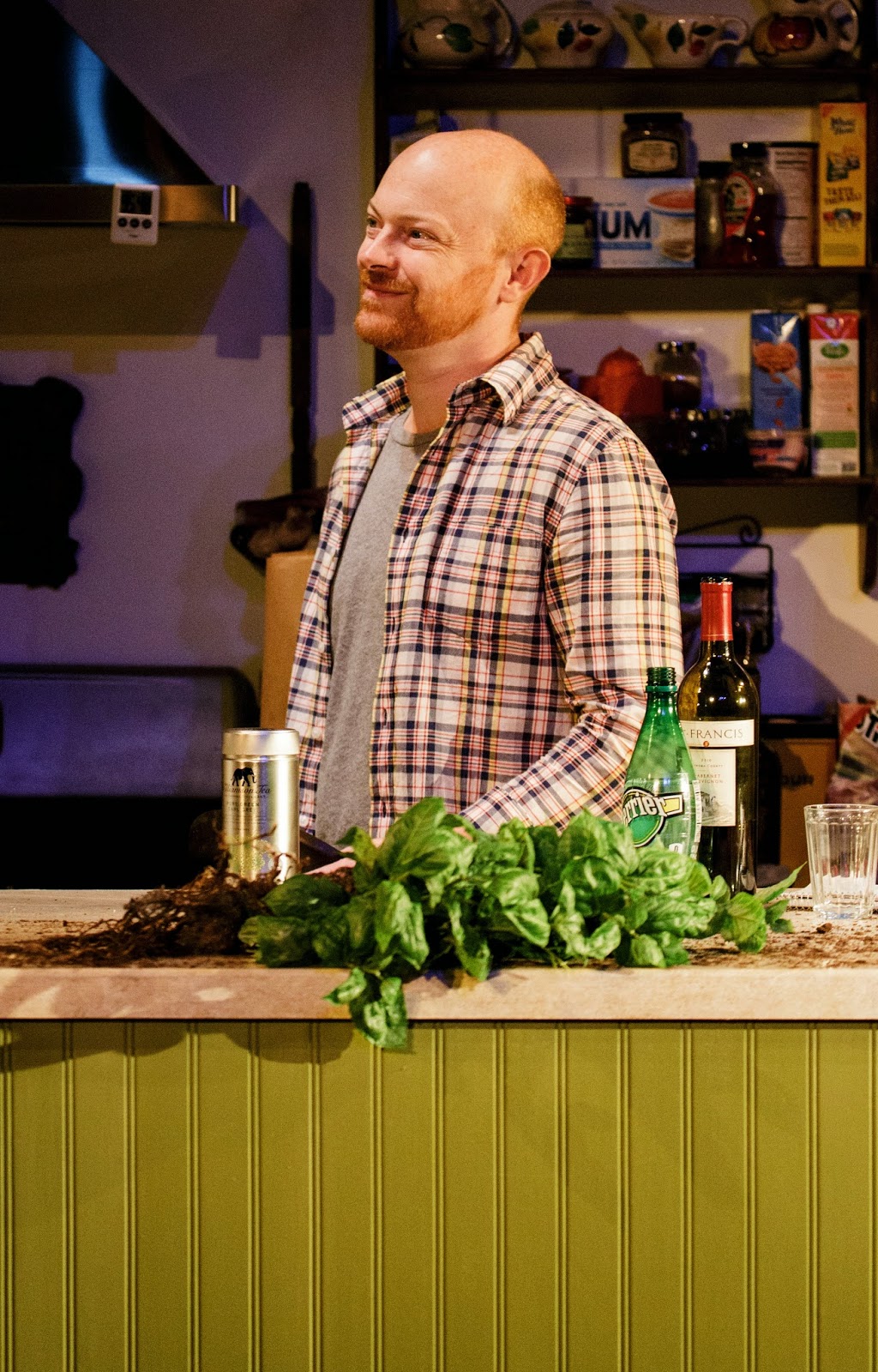 Jeff Biehl. Photo: James Leynse.
There’ll be many other arguments, with voices raised, among this quartet of so-called friends, much of it forcing us to wade hip deep through tons of Ian’s ponderous blather about morality, American values, marriage, and God knows how many other scattershot topics. Characters constantly apologize for their poor behavior—including lies and factual exaggerations meant to keep everyone (including the audience) off balance—apologies that are and are not accepted depending on how sincere they’re understood to be. The weekend quickly devolves into a weekend from hell, with Ian and Maureen strongly requested to go home. When your hosts are so sick of you they tell you to leave, most folks would head for the Taconic as fast as they can; not so here, I’m afraid.


At its dramaturgic heart, this is really a dramedy about infidelity and marital discord. The inciting incident, as the playwriting manuals used to call it, occurs when Ian and Ella are spotted by the sharply jealous Maureen in an essentially innocent but seemingly compromising embrace. Ian has just finished telling Ella about his father’s recent death—which, given their long relationship, would seem to be the kind of thing she’d have known about well before this weekend. Nevertheless, feeling guilty about having gone neither to visit his dying father nor to his funeral, his emotions seem to get the better of him and the hug that follows is prompted more by Ella’s wish to comfort him than by sexual desire. Or is it? We learn soon enough that Ian and Ella had a brief encounter in a closet a year ago, an encounter that apparently didn’t go beyond kissing but that Ian has been obsessing about ever since and which he even inflates to the level of an affair. Ella sharply denies that it meant anything serious and insists that she’s a faithful wife, but, as time will tell, she’s on the verge of further poor behavior. Peter, told about the alleged affair, stands by his wife as long as he can, but Ms. Rebeck makes sure to let us know he’s got a temper he’s learned to keep under control.


POOR BEHAVIOR is the kind of play where the playwright must find believable ways to get people offstage so that others can have the stage to themselves, and to have confidential conversations others shouldn’t overhear. Ms. Rebeck only occasionally succeeds in carrying out these tasks acceptably; she’s certainly not helped by Mr. Cabnet’s allowing the actors to have private conversations that sound as if they could be heard by people in the house next door, not to mention someone in an adjoining room. And, as in so many plays of this small-cast type, as scenes play themselves out, your playgoing radar will warn you when someone’s about to enter, especially when they’ve been off for too long on some artificially concocted mission, like searching for missing muffins.


Katie Kreisler makes Ella a believable presence; she has intelligence and New York authenticity that goes a long way toward making her character sympathetic, which is why I was unable to accept the poor behavior Ella displays toward the end. Ms. Kreisler’s Ella simply seems too smart for that kind of thing. Of course, Ms. Rebeck may be concerned to show that whoever we are, we’re all able to behave poorly. Mr. Avers’s Ian has an effective enough Irish accent, but the guy is such a smug, self-confident bastard (he thinks Peter is the smug one), he gains very little sympathy, and makes it difficult to see what draws Ella—despite her protestations—to him. Heidi Armbruster brings a variety of colors to Maureen, considered by the others as psychologically unbalanced with suicidal tendencies (Ian says she’s “bonkers”), but Maureen—who insists Ian married her either for her money or a green card and now wants a divorce—never comes into focus sharply enough and her hysteria seems forced. The sanest, most stable character is Peter, played by Mr. Biehl with controlled emotion until circumstances push him over the cliff and he explodes with foreshadowed, if contrived, ferocity.


Like those peppercorn, tomato confit, and peach mango muffins that take up so much of the bickering, POOR BEHAVIOR will have you poking at it, looking for the edible parts and spitting out the rest. Unfortunately, the proportions of one to the other may not leave you very satisfied when your meal is over. I recommend a strong cup of Lipton’s to wash it down.
Posted by Samuel L. Leiter at 9:08 AM