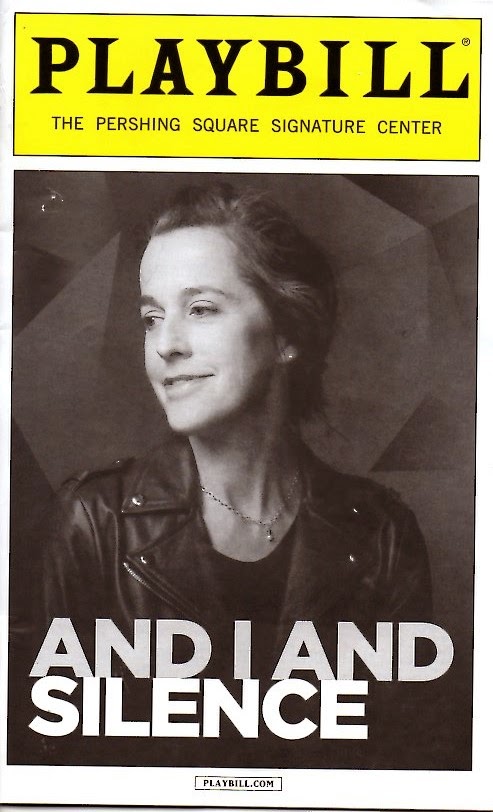 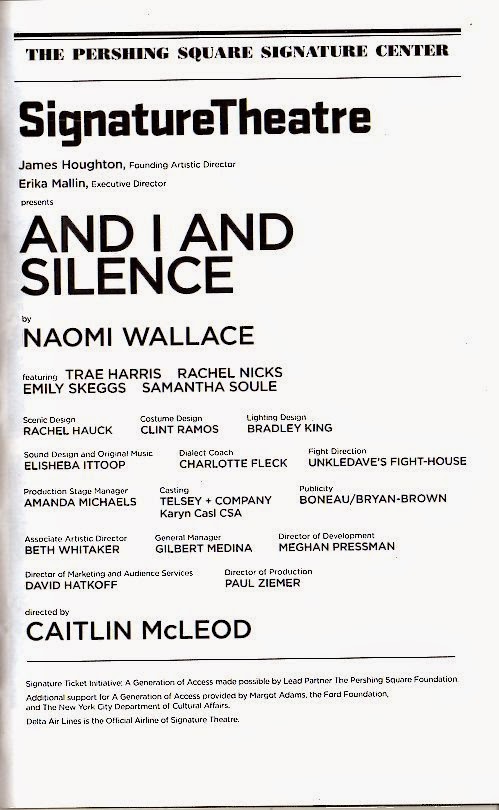 Regardless of its simple words, the title of Naomi Wallace’s AND I AND SILENCE, at the Signature Theatre, has an odd syntax that makes remembering it less easy than one might think. That may be because it derives from an Emily Dickinson poem, “I felt a Funeral, in my Brain,” where, with a comma missing in Ms. Wallace’s title, it appears in the following verse:


As all the Heavens were a Bell,
And Being, but an Ear,
And I, and Silence, some strange Race
Wrecked, solitary, here—


Neither the poem nor Dickinson figure in any noticeable way in the play. The relationship of the poem’s meaning, which is said to describe the mind’s descent into madness, to the play’s themes seems tenuous at best, but I’ll leave it to the more literarily inclined to enlighten me about the connection. 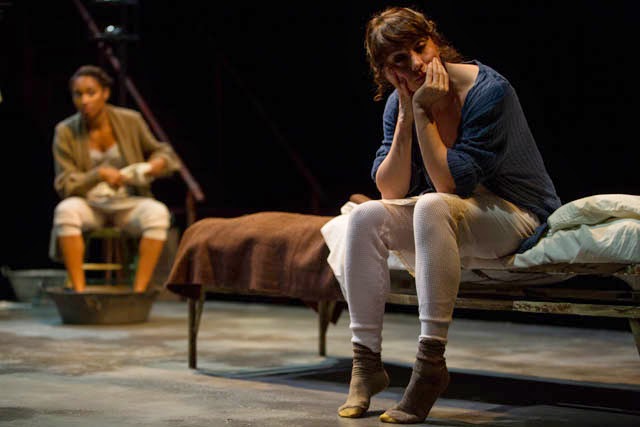 
If the title’s difficult to remember, so, I’m afraid, will be the play. Ms. Wallace, a much lauded, award-winning dramatist best known for ONE FLEA SPARE, about the black plague, has written a lethargic and—despite dramatic occurrences—undramatic two-hander that neither its director, Caitlin McLeod, nor its talented cast has been able to bring to theatrical life. Its 12 scenes go back and forth from 1950, when Jamie (Trae Harris as Young Jamie, Rachel Nicks as the older Jamie) and Dee (Emily Skeggs as Young Jamie, Samantha Soule as her older counterpart), are 17-year-old convicts, to after they’re released nine years later, when they’re living together in poverty. Scene 1 begins in the present, in their apartment; scene 2 reverts to the past, in Jamie’s cell; and the following scenes alternate between the apartment and the jail cell, until scenes 11 and 12, when the past and present collide in the same space. 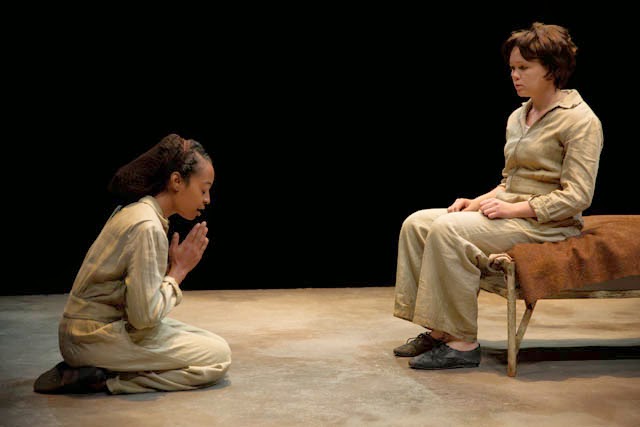 
Rachel Hauck’s barebones, sandwich-style set, which places the audience on either side of the raised platform stage, makes little differentiation between the apartment and the prison cell, apart from the placement of the bed. This satisfies the play’s metaphoric emphasis on the characters’ dilemma, which is that once they’ve been released from prison they find that life on the outside is equally imprisoning, and that freedom is more an illusion than a reality.


Dee and Jamie’s problems are exacerbated by the particularities of their interracial relationship, which begins when the still not quite 17 Dee, a cheerfully optimistic—and illiterate—white girl, sees something in Jamie, a cynical black girl, that inspires her to befriend the initially reluctant Jamie. Dee was imprisoned for stabbing her father, a brute who threw her mother down the stairs. Jamie was accessory to a robbery committed by her brother. This being the 1950s, the racial implications of the girls’ friendship make prison life tough, but post-prison life is even tougher. Dee and Jamie’s accents (kudos to dialect coach Charlotte Fleck) strongly intimate we’re somewhere in the south (the playwright is from Kentucky).


During the prison scenes the girls dream of life outside, planning how they’ll make a living as servants, and constantly rehearsing their servant duties. Jamie assumes the role of teacher, insisting on how they must do their cleaning chores with good cheer, style, and grace. They also rehearse scenarios about how to deal with ill treatment by their employers. Role playing of this nature also informs their life as ex-cons, during which they obsessively practice their routines and how they’ll handle their employers’ whims. In neither the prison nor apartment scenes is there much dramatic thrust, however. Apart from the role-playing sequences (reminiscent of Genet’s THE MAIDS), we get anecdotal exposition that tells us of what the characters have been experiencing in their lives, such as all the times Dee gets sent to “the hole” for her infractions, or the nasty trick she plays on a guard in retaliation for his drinking her juice every day.


On the outside, the women undergo various hardships in trying to get employment; when they do get work, they become the victims of their employers’ crude behavior. Their struggle to retain their dignity leads them to lose or quit their jobs and eventually end up with no money, unable either to pay their rent or buy food. (No mention is made of social services that might assist them.) Ms. Wallace tends to tell us things rather than show them, however, and the play becomes boringly repetitive as it shifts back and forth in time with only a minimum of dramatic thrust moving us forward. Finally, the irony of a situation in which freedom has become even more of an imprisonment than official incarceration is embodied when the space becomes both the prison cell, on the day that Dee is released, and the apartment, as Dee and Jamie find another kind of release from their torment. Unfortunately, the contrast between the joy of one situation and the tragedy of the other fails to carry the intended emotional punch.


This may be because, despite the play's superficial air of “reality,” there’s a somewhat distanced poetic tone to the dialogue and behavior that make it difficult to share the feelings of the characters, or care much about them; they seem more like the idea of characters than the characters themselves. Also, apart from one or two vivid moments, such as when Dee recounts being forced to fellate her employer in a scene that morphs into the play’s only overtly lesbian sexual sequence, the production is visually dull, with little for the characters to do on a set whose only prominent feature is a narrow bed.
Ms. Hauck has added a two-tiered steel staircase at one side of the acting platform to suggest prison steps, and there is some use of the theatre’s overhead corridors to further emphasize the prison ambience. When either set of characters is offstage, they huddle or sit nearby, visually present, but in their own private world, and the scenes are staged so that, increasingly, one pair of actors comes into the set as the others prepare to leave. Bradley King’s lighting and Elisheba Ittoop's sound design and original music do a fine job of enhancing the atmospherics.


AND I AND SILENCE, which runs 90 intermissionless minutes, is an unexceptional cross between prison drama and Dickensian socio-drama. Its performances are satisfactory but unmemorable. The Signature plans to do two more works by Ms. Wallace this season. There’s nowhere to go but up.