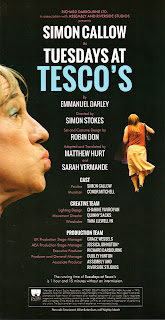 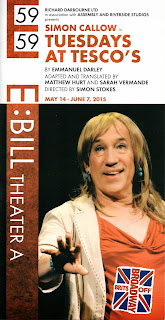 Simon Callow* is one of those classically trained British actors whose little finger knows more about acting than most thespians do in their entire bodies. He’s now putting that knowledge to work in this slim but performance-challenging monodrama (supplemented by an onstage pianist, Conor Mitchell), in which he plays a transgendered woman called Pauline (formerly Paul). He wears a limp blonde wig, an unflattering beige outfit, turquoise high heels, turquoise earrings, a turquoise cinch belt, and a red-orange blouse offering a touch of décolletage; nonetheless, the decidedly thickening, masculine-featured 65-year-old star speaks in what is surely one of the theatre’s most posh and plummy baritones.

Meanwhile, Mr. Callow infuses his movements with essential but not overly campy femininity; the contrast between his indisputable maleness and his slightly awkward female behavior at first seems silly, in the manner of a Hasty Pudding drag performance, yet Pauline inspires not so much laughs but sympathy for the pathos of her dilemma. Since this is a drama in which Pauline tells her story more or less straightforwardly, Mr. Callow changes his voice to capture the other people she introduces. Most notably, we hear Pauline's irascible father, Andrew, speaking in a working class growl, spitting out his exclamations of “Pity’s sake” from Mr. Callow’s scrunched up mouth, shoved, like Popeye’s, nearly over to his ear.

The play, adapted and translated by Matthew Hurt and Sarah Vermande from a popular French original by Emmanuel Darley, LE MARDI À MONOPRIX, was originally seen at the Edinburgh Fringe Festival in 2011, and is now visiting New York as part of the 59E59 Theaters’ Brits Off Broadway festival. For most of its 75 intermissionless minutes, we watch Pauline talk about and demonstrate her concern for the recently widowed, aging, self-centered Andrew, who finds it impossible to overcome his discomfort with his child's transformation. So hard is it for Pauline to break through his formidable defenses that we might even wonder why she goes to so much trouble, giving him all her time every Tuesday to clean his flat and take him shopping at Tesco’s, a leading British supermarket chain. But Pauline, desperate for his acceptance, deeply cares for and worries about Andrew, just as she worries about all the perceived slights she sustains from others when out with him in public, while seeking in even the most casual expression of friendliness a token of approval.
Darley’s script, at least in translation, is written in nearly unpunctuated prose, and with constant “He says” and “I say” before whatever it is that “he” or “I” says. As Pauline moves freely around under Simon Stokes’s direction, she informs us of her weekly routine, talks about her unease at visiting the places in which she grew up, and mentions how shocked her folks were when she first appeared before them as “me as I am now.” She describes how her dad finds it difficult to call her Pauline; recalls when she first felt the little girl inside her; talks of how, when they go shopping, Andrew keeps a distance between them, as if to disassociate himself from his so obviously different offspring; conveys how painful it is for her father, who even remarks about Pauline's stubble, to see in her only his former son and not his present daughter; notes the way others relate to her, both those who see her as something of a freak and those who barely acknowledge her presence; and, among other things, insists on her need to claim herself as a woman.
Aside from a surprise ending that seems unearned and needlessly melodramatic, TUESDAYS AT TESCO’S has very little in the way of drama; it’s essentially an ordinary litany of Pauline’s poignant complaints about her dad’s failure to accept her and the boredom of her care-taking responsibilities, but it’s enough to inspire a performance that seems to find multiple nuances in every sentence. Mr. Callow’s acting is musical in the way he finds the rhythms and melodic patterns in the dialogue, which sometimes has a Beckettian feel to it; he even breaks into bits of dance (tango, flamenco, simulated tap, etc.) to highlight his sudden outbursts of feeling (Quinny Sacks is credited as the movement director). If he were a piano he’d be using 88 keys.

There is actually a piano present, an old upright with its innards revealed, played by the ever-present Mr. Mitchell, who stands or sits at it, with pages of music splayed across its top and a metronome that is even set to ticking; although the reason for his distracting presence escapes me, Mr. Mitchell's affect is of a composer writing the incidental music inserted in the action as it proceeds. He and Mr. Callow perform within a large, slender hoop suspended like a ring of Saturn from above to encircle the acting space, a pink dress hanging upstage from a leafless branch (neither of which is ever referred to), with the principal furniture being an upholstered arm chair. Robin Don is responsible for both the set and costumes, with Chahine Yavroyan providing the nicely varied lighting.

Simon Callow is a uniquely gifted actor, and he's enough of a reason to see this play. TUESDAYS AT TESCO'S is dark on Mondays, but you can catch it any other day of the week.

Full disclosure: I’ve had a sporadic correspondence with Simon Callow since the early 1990s, and interviewed him in his London home in 1993. See Margaret Sullivan, "For Reviewers, How Close is Too Close?" Sunday Review, New York Times, May 17, 2015.