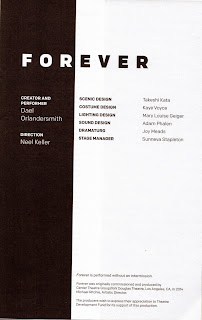 For its current offering of FOREVER, a one-woman play by and with Dael Orlandersmith, the New York Theatre Workshop has cleared the entire expanse of the spacious, proscenium-less stage area to reveal the brick walls surrounding it, with only a narrow band of wood running horizontally across the walls and continuing through the auditorium. Decorating the portion onstage are photographs related to Ms. Orlandersmith’s family, while the auditorium area contains small notes placed there by audience members responding to a program insert (reprinted below). 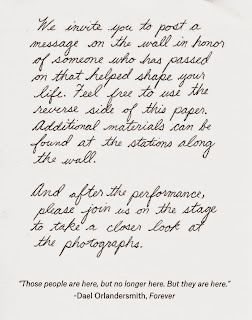 The only scenery (designed by Takeshi Kata) on the roomy stage, which seems rather extensive for a one-woman play, is a wooden platform with a table and a couple of chairs. Ms. Orlandersmith, a hefty, impressive-looking woman (born in 1959, she’ll tell us)—wearing a loose, black, caftan-like garment over black tights (costume by Kaye Voyce), her hair parted in the middle with numerous shoulder-length braids—manages to fill the space with the warmth of her presence and the strength of her performance. Neel Keller moves the actress through the space with discretion, and Mary Louise Geiger’s sensitive lighting does wonders to make the work visually stimulating.

After the writer-actress enters and welcomes us to her show, she begins her memoir in Paris’s famed Pére Lachaise cemetery, where so many famed artists are buried, and moves backward into her own life growing up in New York’s Harlem. Tying her Parisian and New York experiences together is her search for family; on the one hand are the dead writers and musicians she visits in Paris, the artistic parents she claims “helped us give birth to ourselves”; on the other there’s Beula, her late mother, who was both a powerful influence on and psychological obstacle to her development. (Her accomplishments, which include being a 2002 Pulitzer finalist, are not trumpeted, though.). A program note, however, reveals that “she blended fact and fiction” in the writing, which makes one hesitate about how much credence to give the details in her recounting.
Ms. Orlandersmith’s story, like those of most of our lives, is interesting, and it certainly has its dramatic highlights, including the highly graphic account of a rape she endured at 14, but there’s nothing truly extraordinary in it. Girl from Harlem overcomes drunken parent’s abuse and becomes moderately successful artist. What’s exceptional is the way she weaves her material into a compelling narrative, embracing the audience in her memories, particularly those picturing her enduring love-hate relationship with her abusive, chain-smoking, alcoholic mother, who gave weekly Saturday night drinking parties for her friends. She speaks directly to the audience in the first person, now and then briefly changing voices to suggest someone else. It’s a straightforward performance that, apart from the honesty with which she conveys her feelings, avoids the kind of tour de force versatility such works often count on.
Ms. Orlandersmith informs us that her father died in 1963, when she was four, and for much of the play we assume she lived alone with her mother, but late in the play she throws off a comment about “that man who raised me.” What man, I’d like to know, since no man other than her father has been mentioned in a paternal role, and it’s only after her mother’s death in 1989 that she even discovers that this mystery man was not her biological father. Also, we learn only by inference that her mother—who came from South Carolina—was an educated woman (she recited the poetry of Paul Laurence Dunbar and was reading East of Eden when she died), but we don’t know what level of education she possessed, or even what she did for a living; we have to assume that Ms. Orlandersmith grew up in middle-class comfort, despite her home being piss-stained, and stinking from tobacco and Scotch. We get a sense of this when she recalls a poverty-stricken girl she befriended as a child being rejected by her mother because of apparent class and economic differences.
In her teens, Ms. Orlandersmith finally found her pathway out of Harlem when she began hanging out in Greenwich Village, frequenting clubs like CBGB, and otherwise becoming independent of her mother’s influence. Eventually, she achieved a life goal and went to Paris, a place her mother, who dreamed of going, never visited, and where she thinks her mother would have mocked her for being out of place.

The Pére Lachaise material, during which she mentions in passing many of the greats who rest there, concentrates mainly on honoring the memories of singer Jim Morrison of The Doors and ex-pat African-American novelist Richard Wright. Morrison, of course, is the more surprising influence; Ms. Orlandersmith even recalls being harassed by a black man for carrying a Doors album while walking through Harlem. To his “Listenin to that white shit/I should beat your ass,” she responded, “yeah come on motherfucker.” She was 11 at the time. Racial issues, though, take a back seat to more universal ones; in fact, Ms. Orlandersmith notes the potent impact on her of two men of Irish ancestry, the playwright Eugene O’Neill and a cop who comforted her after her rape.
Following her mother’s death, Ms. Orlandersmith learns things about her she had never known, an experience many of us have shared. My wife only just discovered something about a close, departed relation that could make a playlet of its own. We all carry secrets that may or may never come to light.


Ms. Orlandersmith, whose play is essentially a struggle for reconciliation with her mother, manages to finally find it in Paris, and to realize, over Jim Morrison’s grave, that she and Beula will be there forever. Truth or fiction? Does it matter?