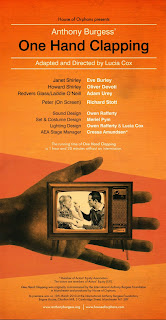 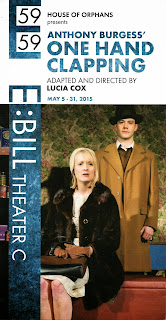 Before you can take your seat at the tiny Theater C at 59E59 Theaters you have to pass the small stage on which, sitting on a red leather-covered trunk, is a pretty blonde, smartly dressed (costumes are by Meriel Pym) in late 50s style, mink coat and all. This is Janet Shirley (Eve Burley), the heroine of Anthony Burgess’s ONE HAND CLAPPING, a 1961 satirical British novel newly adapted and directed for the stage by Lucia Cox and now visiting New York as part of the Brits Off Broadway festival. The production was originally given by the House of Orphans in Manchester, UK.

Janet’s in a room whose floral wallpaper (the set is also by Ms. Pym) suggests provincial middle-class domesticity; there’s a period TV in the room, but a surreal touch is added by three additional small-screen sets placed on the set’s periphery. Each of the latter is practical and made much use of during the performance, especially for showing vintage commercials that underline the play’s anti-consumerist theme.

As the house lights dim, Janet (who often speaks directly to us) introduces herself, rattling on in a rapidly paced, relentlessly perky, regional accent (which took me a few minutes to grasp). She says she’s going to tell us her story, noting, “Whether you believe it or not is your business and not mine.” We're told she was 23 and her husband, Howard (Oliver Devoti), 27, when the story, which seems to be a few years in the past, took place.
In the story, Howard, a used-car salesman, has an all-encompassing dread about the possibilities of nuclear annihilation and a psychopathic cynicism about modernization, consumerism, and the Americanization of England. He therefore decides to take advantage of his “photographic brain,” which he’s actually ashamed of because he didn’t earn the knowledge it gives him the way a scholar might have. He wins 1,000 pounds on a TV quiz show and then trains himself to read the future about a horse race, raising his winnings to 79,000 pounds. Clearly bonkers by now, his plan is to spend the money on all the luxuries he and Janet can enjoy within a month and then “snuff” their lives out on her birthday as a protest against modern civilization. As he declares, “When all’s said and done, there’s not all that much to live for, is there?”
Janet, however, despite the jewels, furs, wine, fine food, and travel the money has been providing (including a trip across America), is content to live her simple life—stocking groceries at the supermarket, sitting by the fire, watching the telly, drinking tea, cooking meals of fish sticks and ketchup—and isn’t so ready to go gentle into that good night. As the play nears its humorously macabre conclusion (like an episode on “Alfred Hitchcock Presents”), we understand why its storyteller was seated as she was when the play began, and what it is that’s inside the camphorwood trunk on which she’s sitting.
Ms. Cox’s compact, 80-minute, one-act version of Burgess’s novel moves swiftly under her direction, with the actors performing with comically heightened behavior to highlight the play’s semi-absurdist style. The adorably attractive Ms. Burley is all bright-eyed and bushytailed in playing Janet’s directness and enthusiasm, while Mr. Devoti’s Howard makes a perfect foil, seeming to be almost robotically programmed and emotionally distant. As the host of the TV show on which Howard appears, Adam Urey is amusingly over-unctuous, while his portrayal of a preening poet whom Howard patronizes is appropriately energetic.


The play’s title, a phrase from a Zen koan (“What is the sound of one hand clapping?”), is also the name of a play Janet and Howard attend in London because Howard read that it deals “with the decay and decadence in the world about us.” Howard observes that using one’s imagination when pondering “one hand clapping” is “supposed to be a way of getting to God.” I can’t vouch for that, but when ONE HAND CLAPPING ended last night, I responded with the sound of two hands clapping.
ONE HAND CLAPPING
59E59 Theaters
59 East 59 Street, NYC
Through May 31
Posted by Samuel L. Leiter at 3:35 PM