"The Eyes Have It" 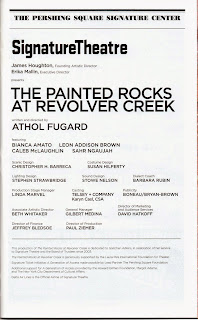 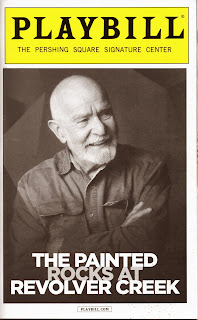 Athol Fugard, the world-renowned South African playwright-director-actor responsible for numerous plays depicting the travails of his native land, is back at the Signature Theatre, which has become his New York artistic home. After all, this is where, in 2012, he was the first to be honored with a season’s residency at the company’s new Pershing Square Theatre. Happily, Mr. Fugard, who’ll be 83 next month, remains a commanding writer, as demonstrated by his latest effort, THE PAINTED ROCKS AT REVOLVER CREEK, a persuasive, touching two-act play commissioned by the Signature and now being given its world premiere. Although not, perhaps, on the level of his greatest works, like SIZWE BANZI IS DEAD, THE ISLAND, A LESSON FROM ALOES, or THE ROAD TO MECCA, it’s nevertheless compelling and thoughtful; it’s also getting a damned good performance. 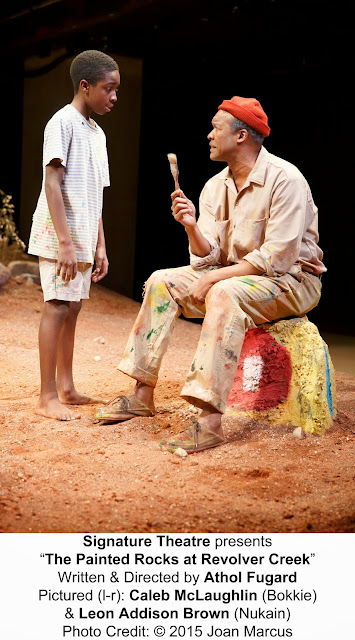 The play is inspired by Nukain Mabusa, whom Mr. Fugard refers to as an Outside Artist, which he describes in an interview “as someone who has created something significant or beautiful with no formal training in any artistic discipline.” Mr. Mabusa was a farm laborer who, during the years between the mid-1960s and 1980, painted striking geometric images on the rocks and boulders near his hut. Mr. Fugard, who’s proud to consider himself part of the same brotherhood of Outsider Artists, isn’t writing an historical documentary, however, but a work of fiction in which the forgotten artist comes to stand for something greater than his own life and work. 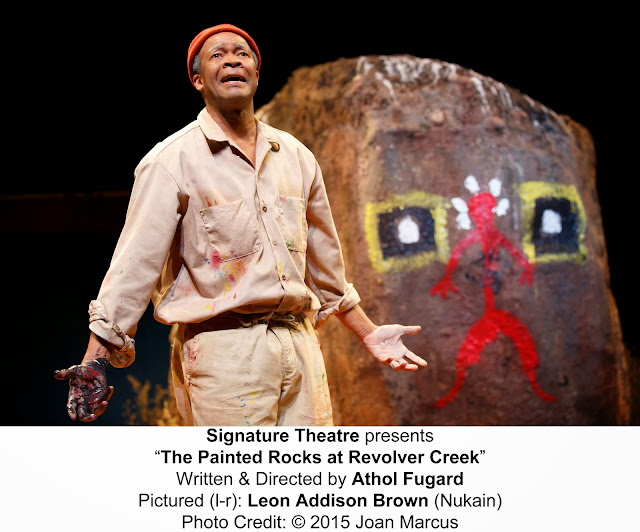 The first act is set in 1981 and, at first, focuses on the old, black farmhand and artist Nukain (Leon Addison Brown), and Bokkie (Caleb McLaughlin), a cheeky 11-year-old black boy who idolizes him, affectionately calling him Tata (a term of respect for an older man)* and helping him paint the rocks at Revolver Creek, Mpumalanga Province. Their easel is a hill of dry red dirt with outcroppings of many already painted rocks and boulders (marvelously designed by Christopher H. Barreca and lit by Stephen Strawbridge). Dominating the stage at center by a huge boulder whose broad face has not yet been adorned, and which it is Nukain’s goal to paint before he dies. 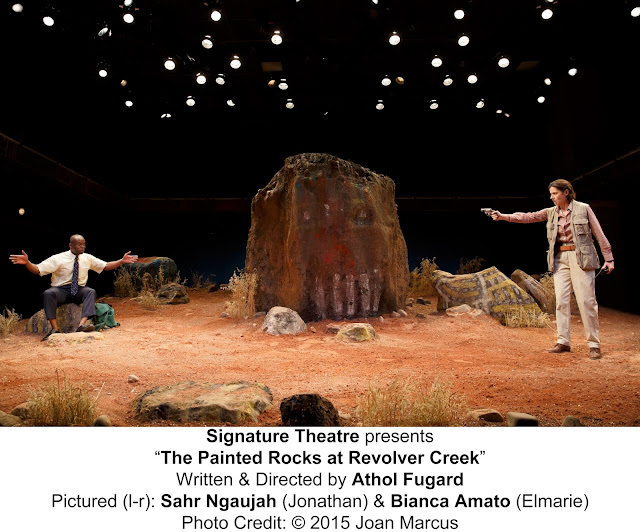 Tata, struggling for inspiration before he can paint, discourses on his art and offers words of wisdom to the adoring child, including the advice to save the soles on his shoes by tying them together and wearing them around his neck. When Tata is finally ready, he says, "Give him eyes," and the pair, using an assortment of paint cans and brushes, sing and dance a Zulu song Tata has taught the boy as they paint the rock. As we watch there comes into view a striking, mask-like image, with two large, square eyes, a crude human figure where the nose might be, and long vertical lines suggesting teeth. This is intended to represent, in its abstract way, the artist’s story, a concept the little boy venerates. 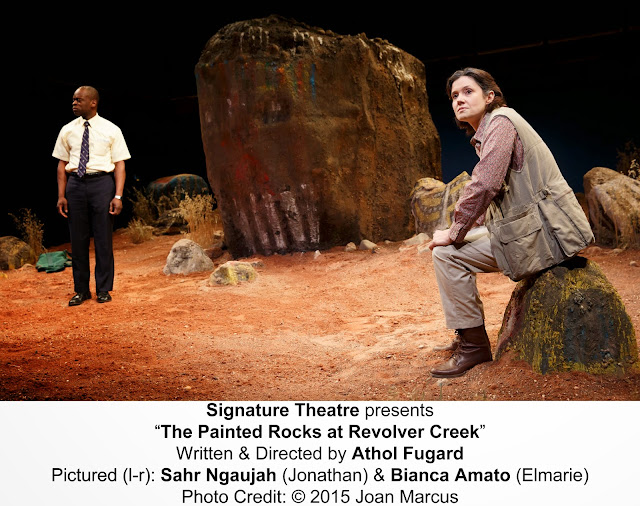 Their exaltation ends when the 40ish Afrikaner landowner, a woman named Elmarie (Bianca Amato), enters, bearing leftovers for them to eat. Elmarie, a pious Bible thumper wearing her Sunday church clothes and straw hat (the well-chosen costumes are by Susan Hilferty), appreciates the rock garden of “flowers” the old man has so assiduously created over the years, but she’s displeased with the face on the rock and insists it be washed away and replaced by a floral design. Bokkie is outraged at this threat to Tata’s “story,” and Elmarie orders Tata to use his belt to teach the boy how to behave.

Act two occurs twenty-two years later, in 2003, about a decade after the ending of apartheid. A black man in his early 30s appears on the red earth, wearing a white shirt, tie, dark slacks, carrying a backpack, and with his shoes tied together and hanging from his neck. The painted rocks have faded in the wind, sun, and rain, and the big face retains only faint remnants of what Bokkie and Tata painted years ago. The man is soon interrupted by Elmarie, now an angry, frightened, middle-aged woman. She's dressed in khaki pants and jacket, has a revolver in her hand, and shows every intention of using it.

The man is Jonathan (Sahr Ngaujah), the grown up Bokkie, now a schoolteacher, who had escaped to Zimbabwe; he’s come back to repaint the rock out of respect for Nukain. Even when she realizes who he is, Elmarie is furious about the intrusion. The political situation in South Africa has emboldened some blacks to use their new freedom to perform acts of of violence against Afrikaner farmers. Under the new constitution, Afrikaner landowners are permitted to keep their land, unlike Zimbabwe, where confiscation led to serious problems. Jonathan and Elmarie are each preoccupied with who truly owns the land, those who were here originally or those who expropriated and cultivated it to its present state. Jonathan warns that without mutual understanding, “our future will be as big a mess as anything in our past.” All of which leads back to Jonathan’s overwhelming need to restore Nukain’s painting, the symbol of his dignity and existence at a time when men such as he were ignored.

Mr. Fugard’s dramatic gifts, residing in his lyrical language and ability to encapsulate seething ideas in dramatic dialogue, allow him to take what’s essentially a slender dramatic situation and both capture and maintain your attention. Still, the play, which clocks in at a reasonable hour and 40 minutes, does sometimes slow down amid the writer’s love of words, and the play slides a bit too much into didactic talk when Elmarie and Jonathan discuss their nation's issues.

Under Mr. Fugard’s careful direction, the acting combines truth and honesty with close attention to the rhythms and sounds of the language; there's a touch of theatricality in the staging that often requires the actors to speak while looking out over the audience, as if gazing at land stretching to the horizon. Mr. Brown is splendid as the wise, gentle, humbly subservient Tata, while Mr. McLaughlin nearly steals the show as the spirited, intelligent child. Mr. Ngaujah is every inch the politically aware, sensitive, yet angry Jonathan, while Ms. Amato brings a rare combination of sincerity, vulnerability, and strength to the Afrikaner who must come to terms with the threat to the entitlement that constitutes her heritage.

*The program includes a glossary insert of the many South African words used in the script.