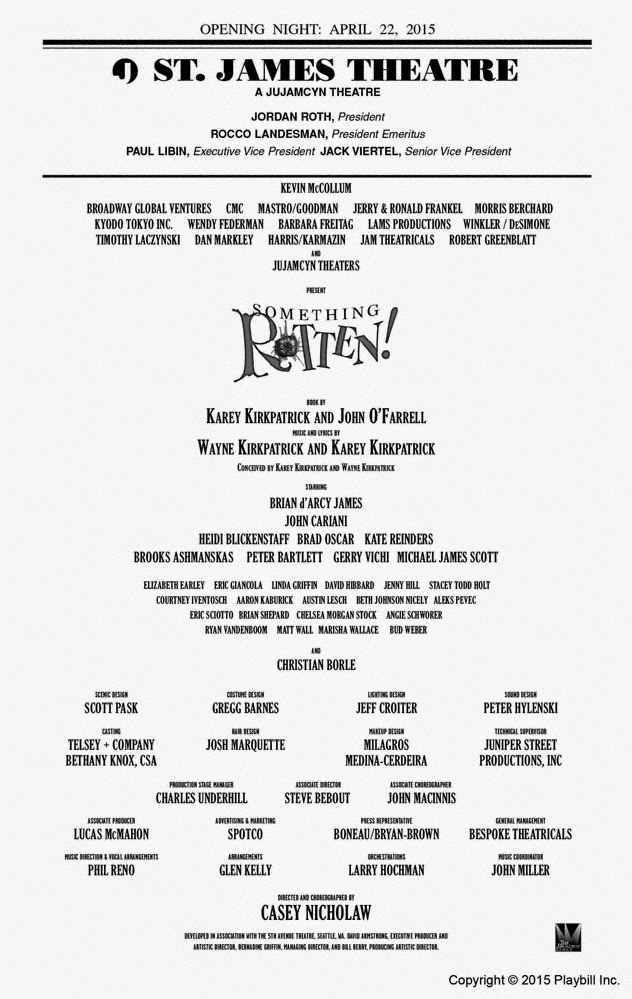 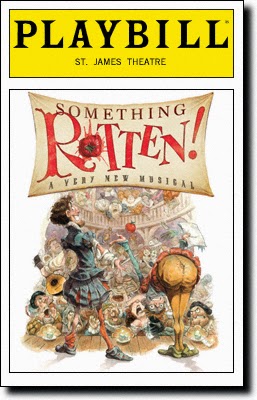 With the end of April, and the announcement of the major award nominations, I hereby conclude my coverage of the 2014-2015 New York theatre season, which—like most—was mostly on the lower half of the sliding scale from up to down. Delightfully, though, SOMETHING ROTTEN!, the last show I saw, was also one of the most enjoyable, despite a tiny drawback or two. It’s a silly, farcical, insistently rambunctious, over-the-top, and—as many have pointed out—sophomoric satire on Shakespeare and theatre (musicals in particular). However, its joyously exuberant cast plays it with such enthusiastic panache, it’s a wonder their tongues don’t poke holes in their cheeks. This show’s hard not to adore, even when you’re shaking your head at its obsession with over-obvious double entendres and puerile bathroom humor. Part of the fun is congratulating yourself on catching the Shakespearean and musical references; if you’ve never brushed up your Shakespeare or can’t tell the difference between A CHORUS LINE and CATS, maybe you’ll want to visit THE VISIT instead. 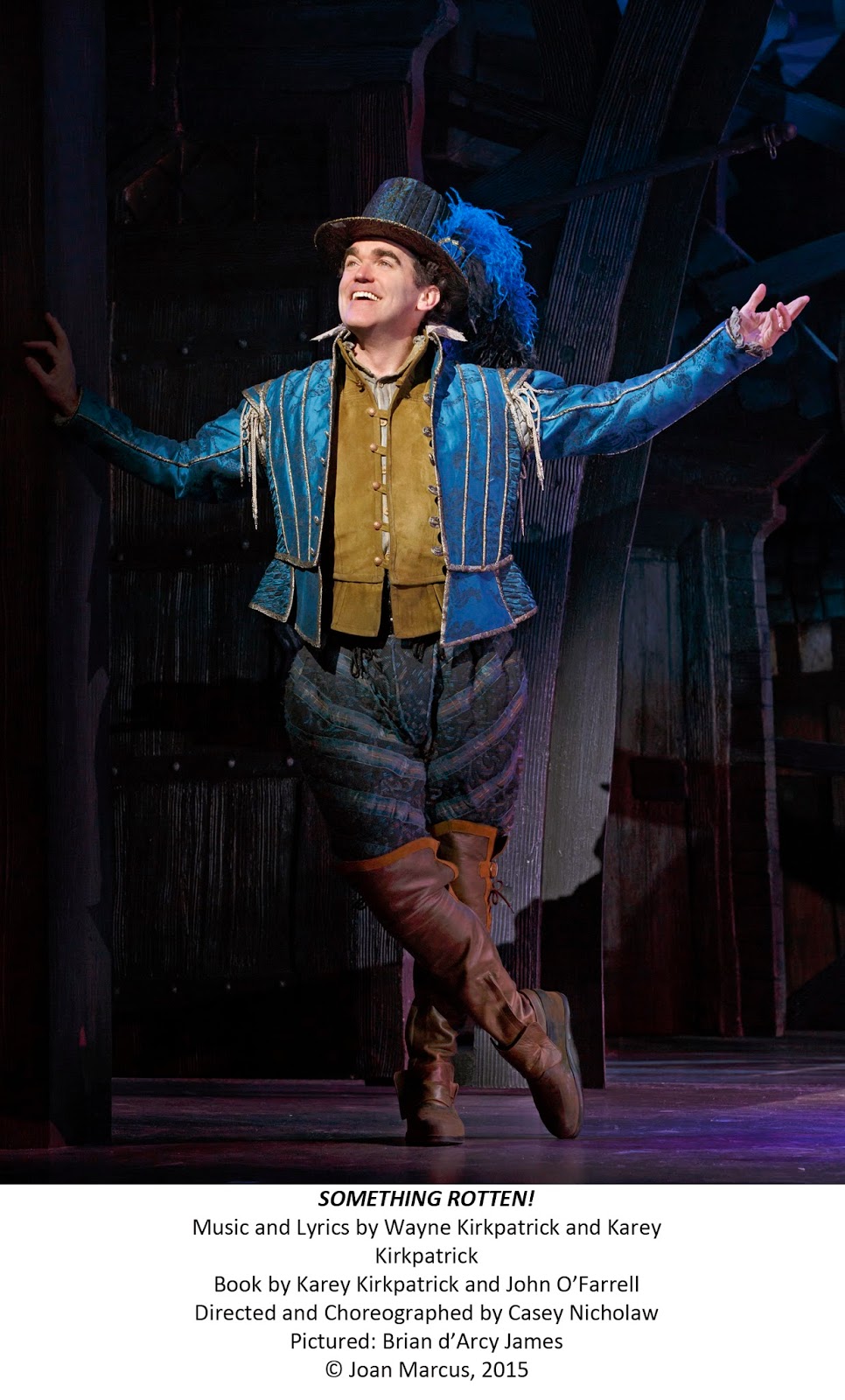 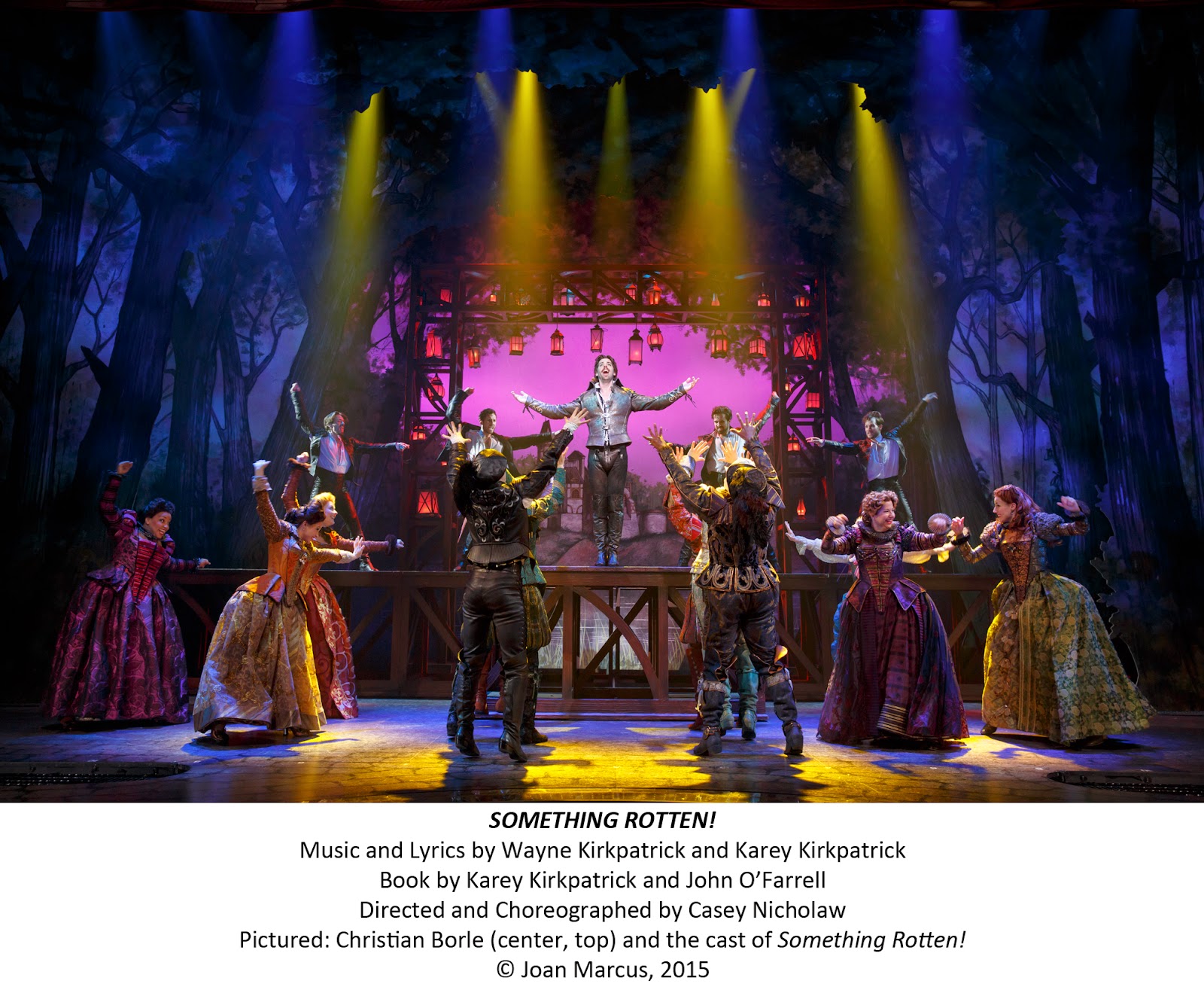 It’s cool for once to see a musical that isn’t based on a movie, book, or biography, making it impossible to compare to anything but itself; in fact, of all the current Broadway musicals, only SOMETHING ROTTEN! and IT SHOULDA BEEN YOU fit this category. Karey Kirkpatrick and John O’Farrell wrote the book, Wayne Kirkpatrick and his brother Karey Fitzpatrick wrote the music and lyrics, and Kirk and Wayne conceived the show. Casey Nicholaw, the director-choreographer genius responsible for ALADDIN (direction and choreography) and THE BOOK OF MORMON (co-direction and choreography), is a large reason for the show’s nonstop fusillade of entertainment. 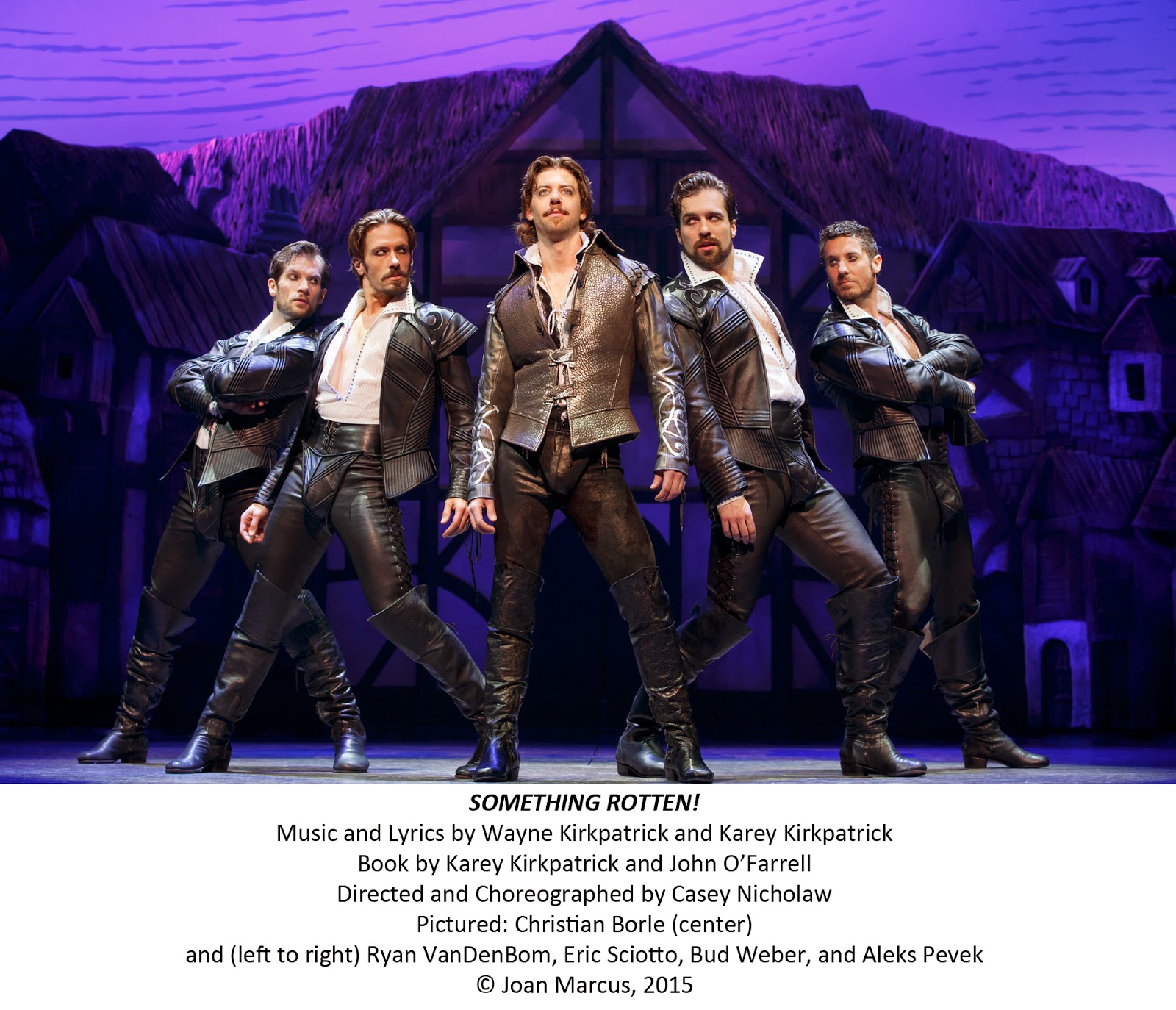 There's nothing rotten about SOMETHING ROTTEN!, which throws us into the bear pit (mosh pit?) of 1590s London, to which we’re introduced with the splashy opening number, “Welcome to the Renaissance,” featuring energetic ensemble member, Michael James Scott. Soon enough we’re in a world where Shakespeare (Christian Borle) is the preening, cocky (in more ways than one), sexy rock star of the theatre world, and where brothers Nick (Brian d’Arcy James) and Nigel Bottom (John Cariani)—no need to list the jokes that last name inspires—are struggling playwrights jealous of the Bard (a word that gets its own well-deserved repartee). When Nick bitches about Shakespeare, the ensemble responds, “Don’t be a penis. The man’s a genius.” Nick’s married to the proto-feminist Bea (Heidi Blickenstaff, terrific), who gets a job carrying buckets of bear shit by dressing as a man, and who hopes to see women take over from men the playing of women’s roles. Needing to make some kind of theatrical breakthrough to defeat Shakespeare, Nick seeks out the soothsayer Nostradamus (Brad Oscar, really hilarious)—no, not that one, but a distant relative named Thomas Nostradamus. 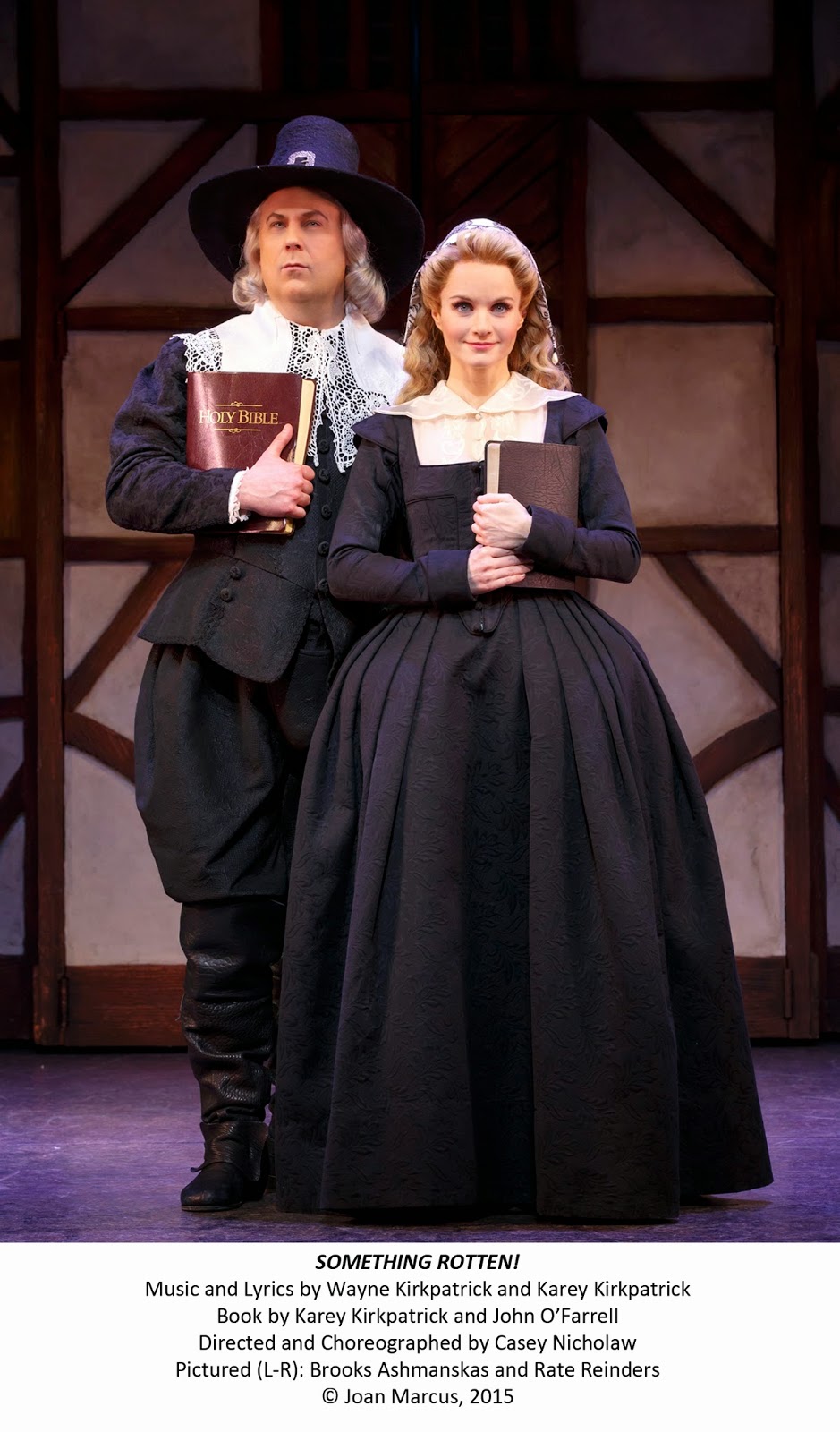 Nostradamus foresees that the next big thing in theatre will be musicals, a concept totally alien to Nick, so the show launches into the show-stopping “A Musical,” a raucous song and dance lampoon referencing every big musical you’ve ever (or, perhaps, never) seen, from WEST SIDE STORY to SOUTH PACIFIC to ANNIE to LES MIZ to FOLLIES to SWEET CHARITY to that show where all the chorus kids hold up their headshots. (Although surely unintended, the number has a sequence set before a radiating Radio City Music Hall-type background that looks like it came directly from “I’ll Build a Stairway to Paradise” in  AN AMERICAN IN PARIS.) “A Musical” comes fairly early, and is so good—the applause never wants to stop—you wonder how the show will ever top it; actually, despite many wonderful songs and dances, it never quite does, so the show cleverly reprises it at the grand finale. 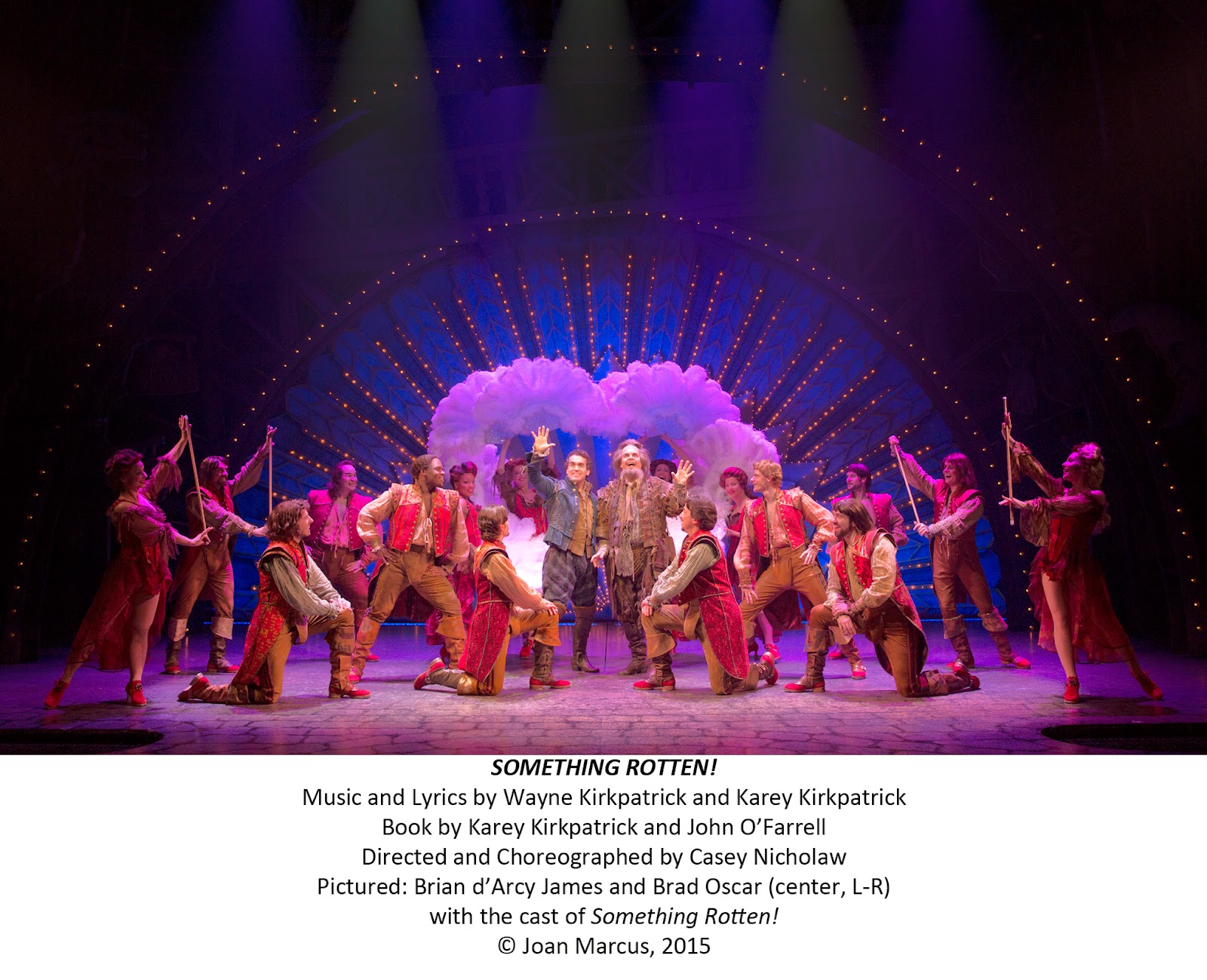 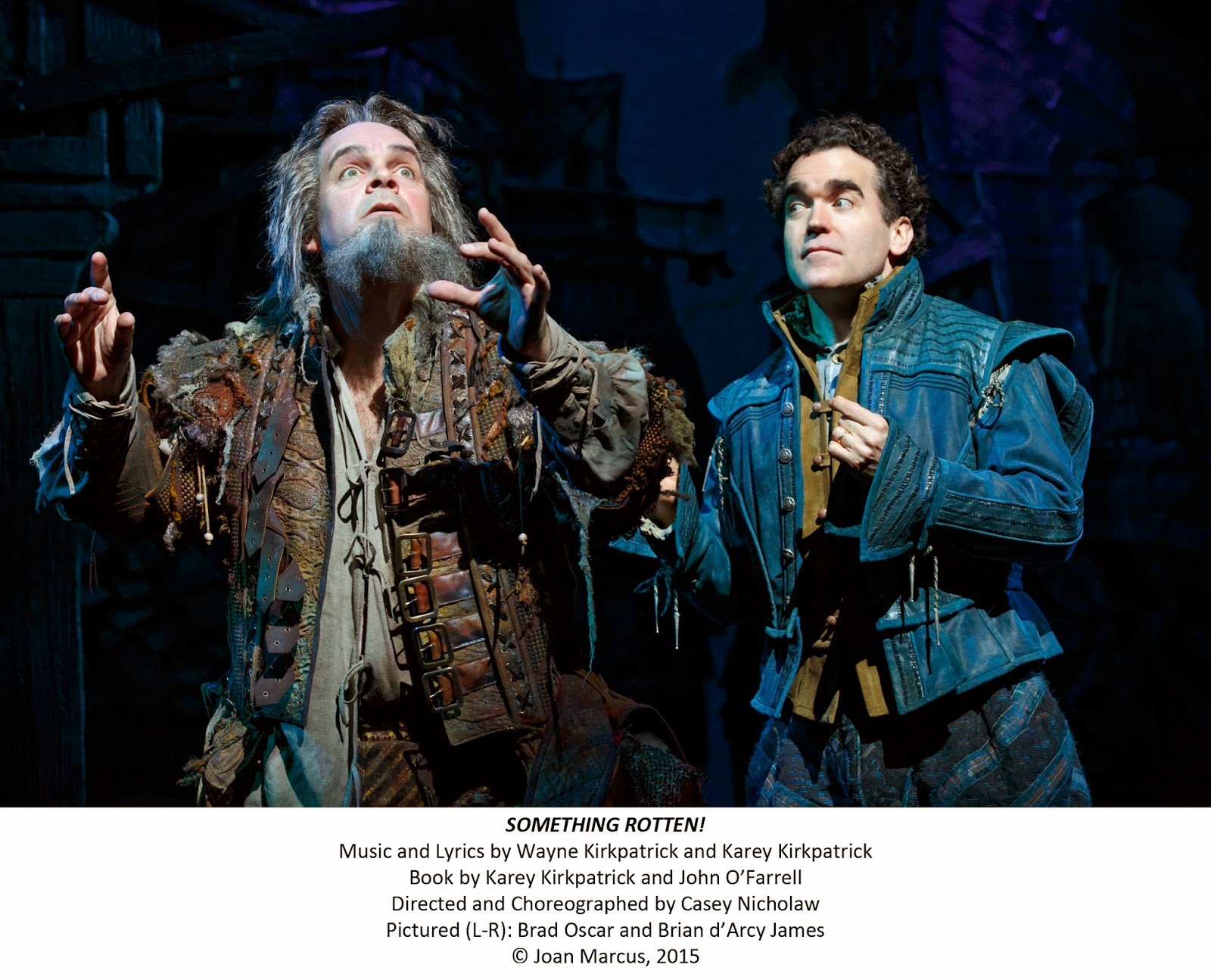 The specific show Nick’s inspired to write is also a result of Nostradamus’s prognostications about something brewing in Shakespeare’s brain, but the soothsayer’s not quite sure about the title. This leads to Nick and Nigel writing a new musical called “Omelette: the Musical,” and you can imagine what this leads to (hint: imagine a chorus dressed as eggs). Soon enough Shakespeare, disguised as an obese actor named Toby Belch from York (Nick calls him “the new York actor”), joins the company to spy on Nick and Nigel’s show.

Complications pile up, including a romance between Nigel and Portia (the delicious Kate Reinders, a dead ringer for Kristin Chenoweth), the very blonde daughter of Brother Jeremiah (Brooks Ashmanskas), a Puritan who hates the theatre (as all good Puritans did) and who can’t say a word without implying he’s gay; the story of how Shakespeare stole HAMLET from Nigel; the loss of the Bottom brothers’ patron, Lord Clapham (Peter Bartlett, marvelously plummy), when he’s unhappy with their musical about the Black Death; an old Jewish moneylender named Shylock (Gerry Vichi, ethnically amusing) who becomes Nick and Nigel’s backer; a trial scene in which Bea, dressed as a bearded male lawyer, saves the day, and . . . you get the idea. 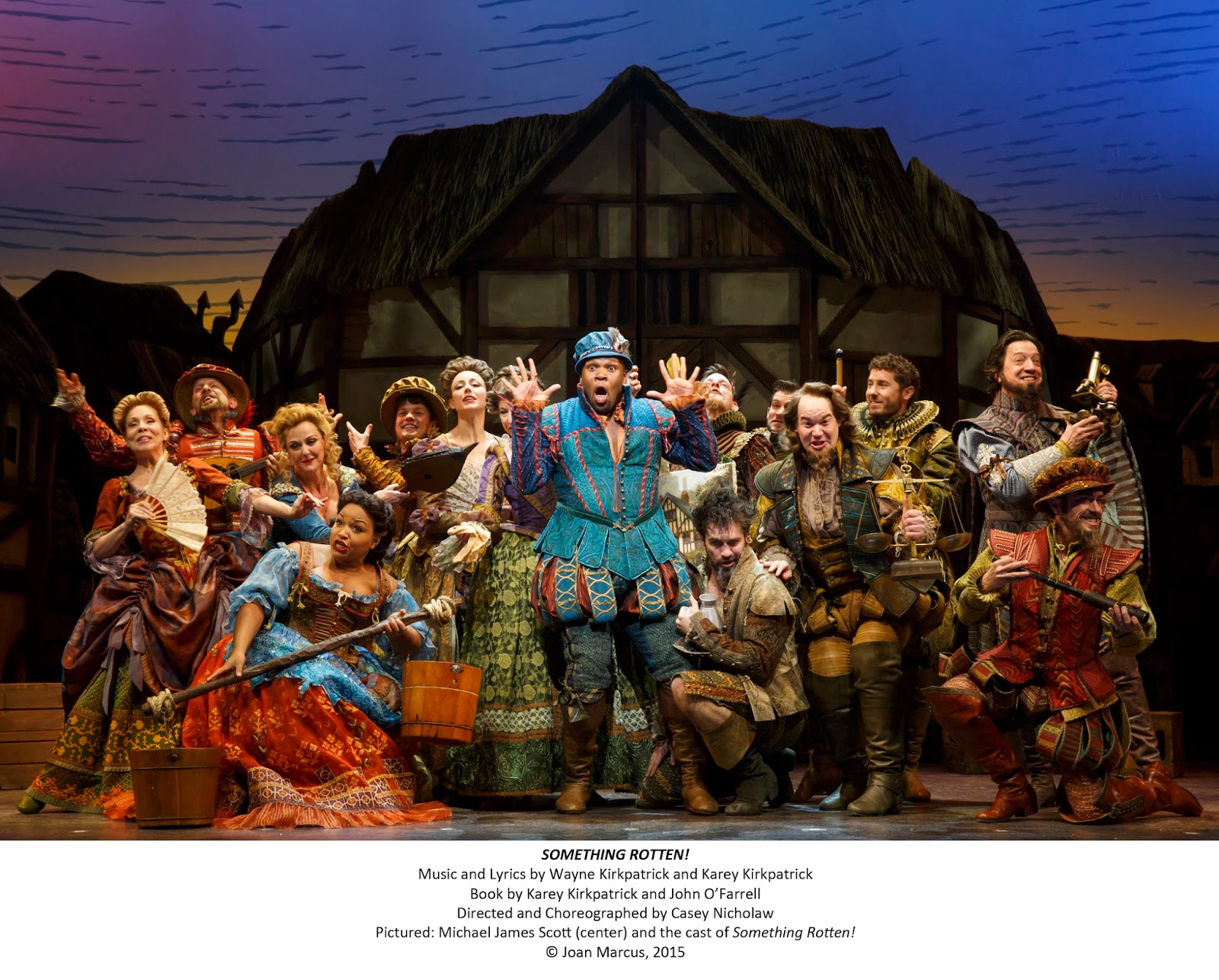 All is encased in Scott Pask’s very busy set design, redolent with Tudor highlights; it uses lots and lots of sliding and flying units, but is neither especially novel nor inventive. Gregg Barnes’s brilliant costumes, though, are visual delights, combining Elizabethan authenticity with Italian Renaissance touches, including exaggerated codpieces worn on leather tights by lithe young studs; Shakespeare, in particular, stands out (yes, that way, too) in his British rock idol persona (down to the Jaggeresque accent). It makes perfect sense when Mr. Borle’s Shakespeare gets to sing “It’s Hard to Be the Bard.” Wait a sec. I don’t mean that kind of hard! 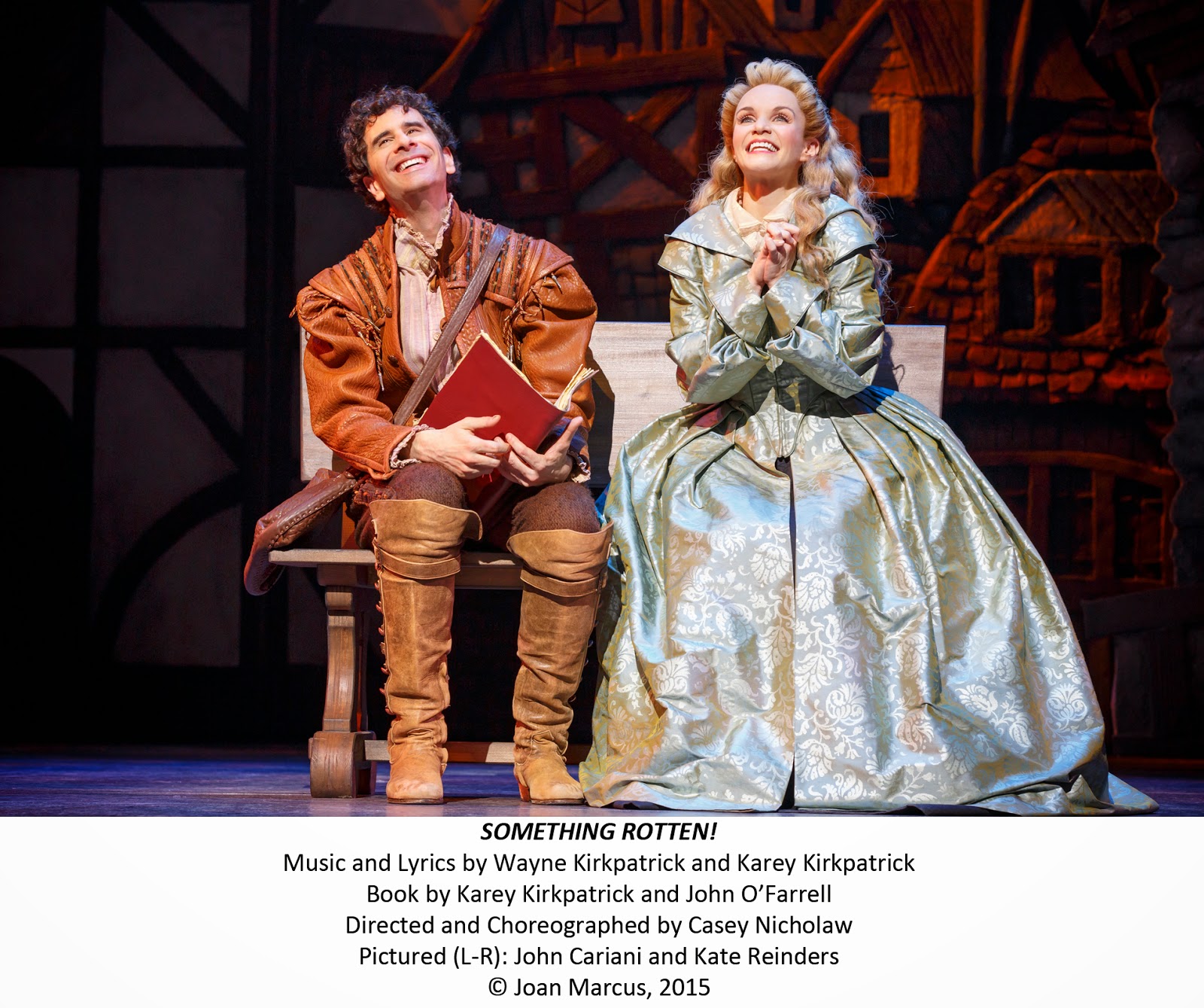 Wonderfully, despite all the craziness, the music, while not on a par with the genre’s greats, is excellent enough for the task of hand, most of it up-tempo, but now and then relaxing into near balladry. It’s almost as if New York’s tired businessmen united to have a carefree show they could enjoy without undue cogitation or artiness, which isn’t to say that a variorum of artistry and artfulness hasn't gone into creating this welcome laugh fest. Even if you don’t burst out laughing every five seconds, it’ll still be hard to wipe the grin off your face. 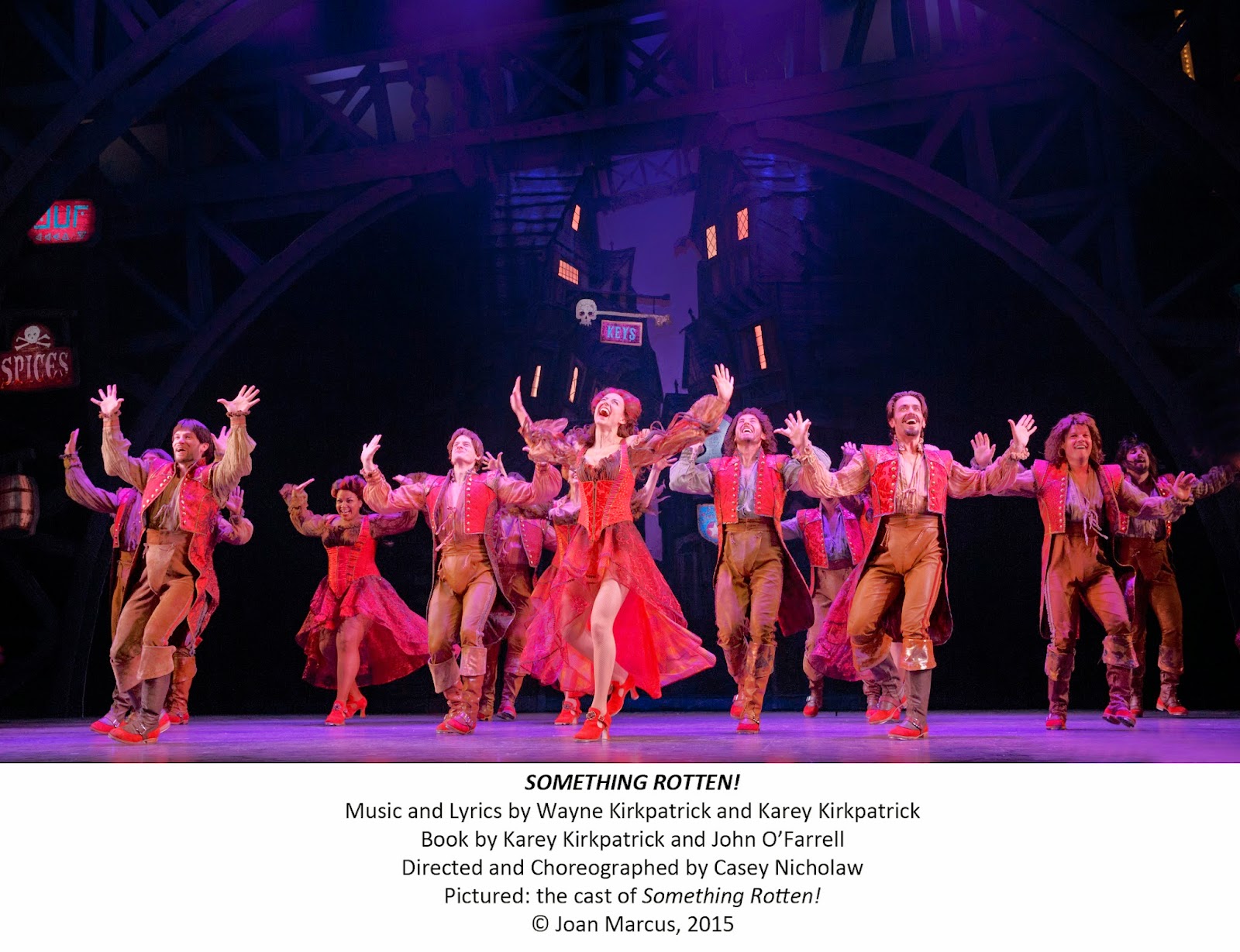 I’ve always liked Brian d’Arcy James as a straight actor and musical theatre leading man; any doubts about his comical abilities are dispelled by his riotous endeavors here, and his tap-dancing chops come as a big surprise. Ditto Christian Borle, hilariously self-involved as Will the quill, and just about able to do anything required of a musical comedy star. Playing the least loony of the leads, John Cariani is a perfect foil as the sensitive, ambitious poet who finds it so difficult to make Nick see that maybe “Omelette” is a rotten egg. 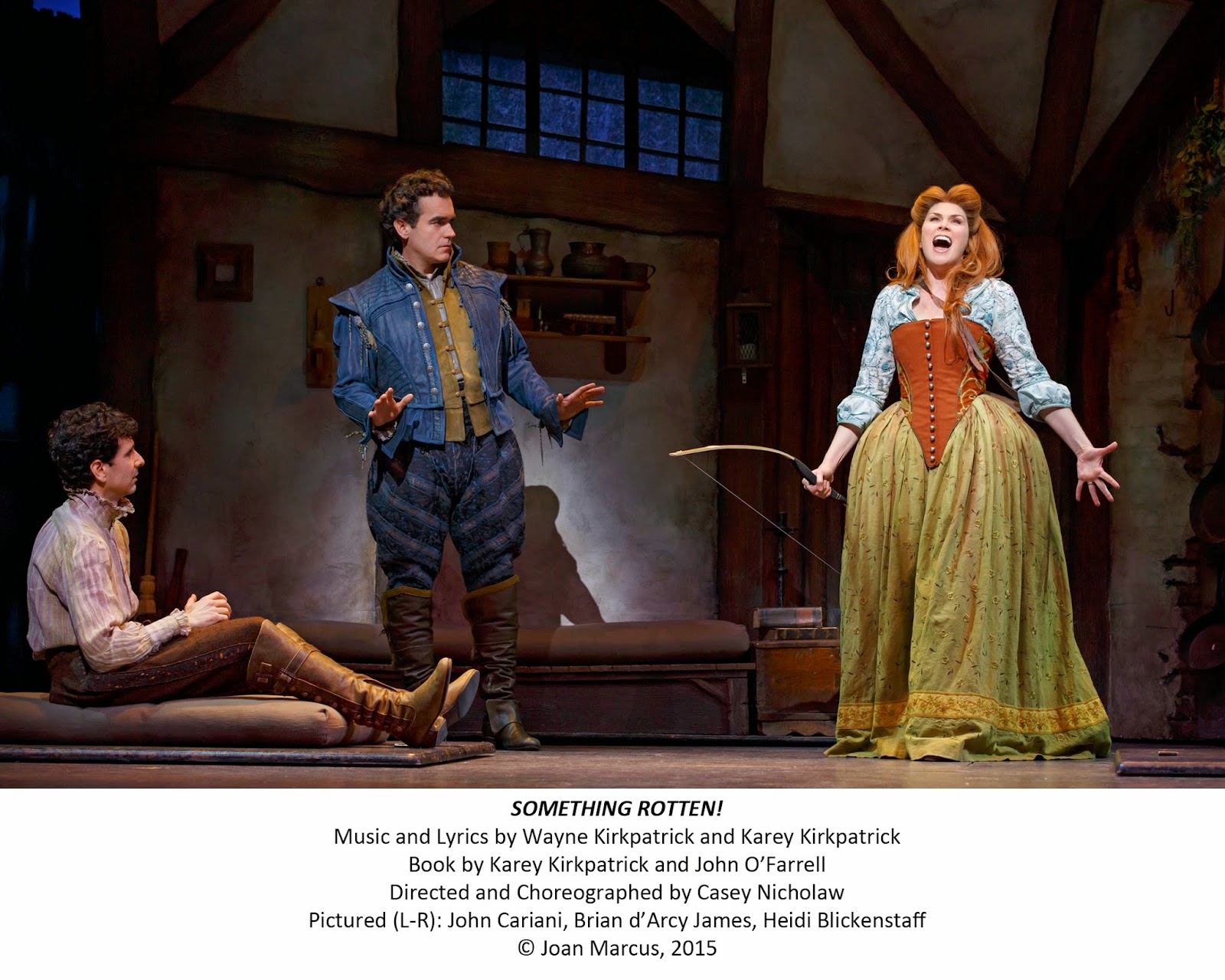 There's not a cracked shell in the company and the yokes are better than this one. There's a good chance the musical comedy being fried, scrambled, poached, and boiled at the St. James will be runny for a long, long time.