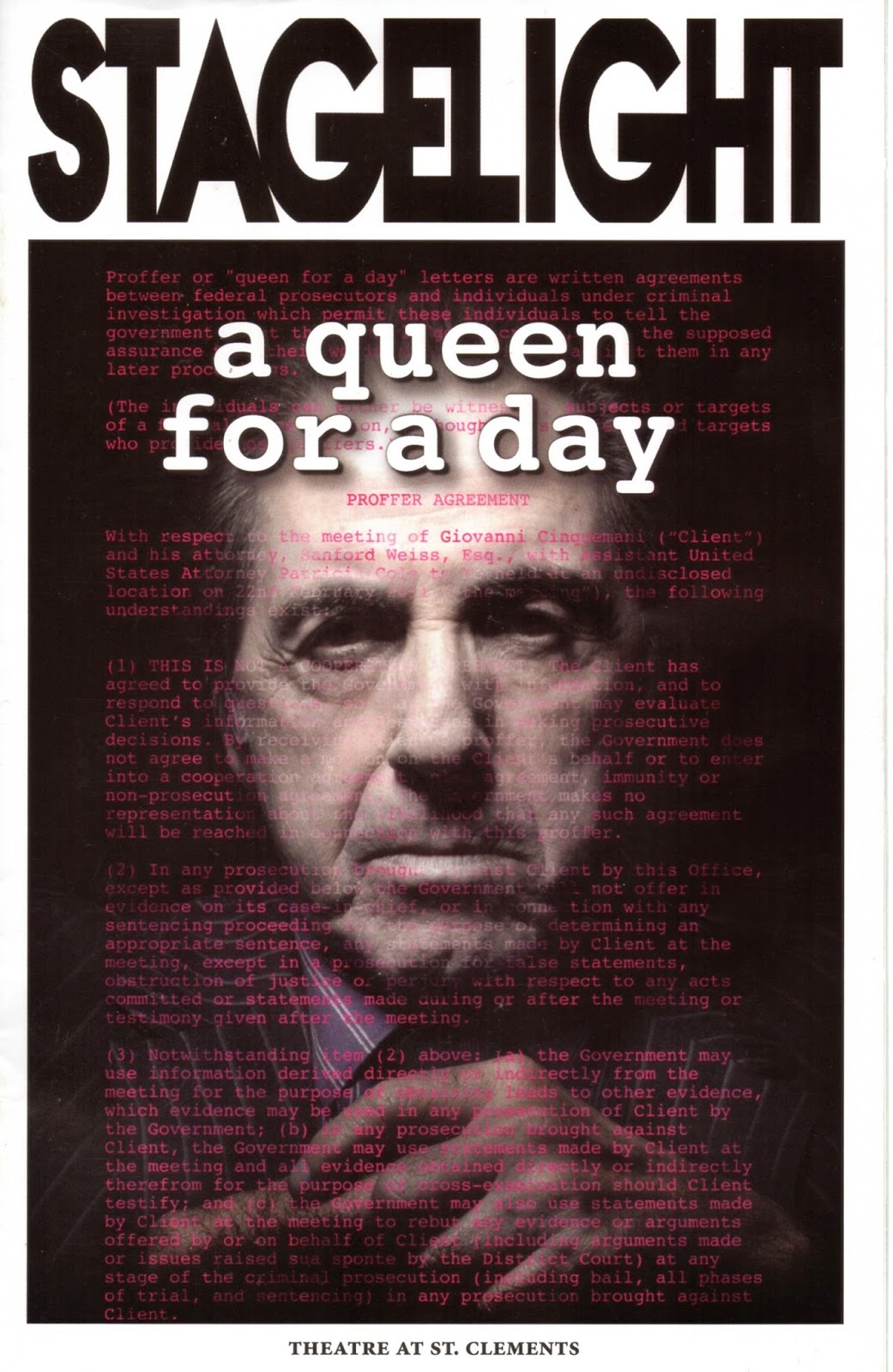 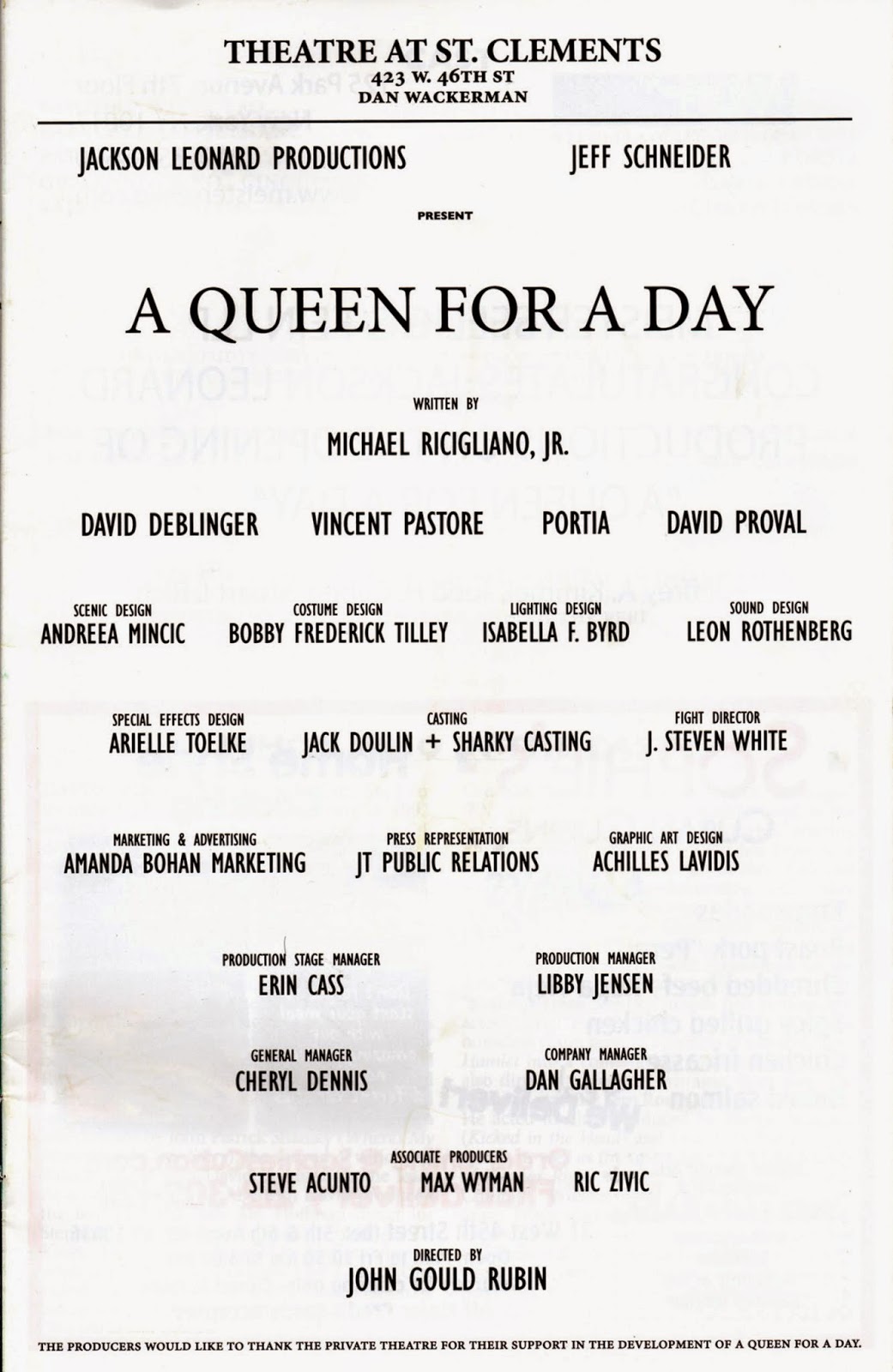 Like many of you, I immediately thought of the old TV show “Queen for a Day” when I saw the title of this new play by Michael Ricigliano, Jr., which is enjoying its world premiere at Theatre at St. Clements. So, indeed, when he hears the phrase, does the play’s central character, Giovanni “Nino” Cinquimani (David Proval), a Mafia soldier who’s given the opportunity to receive immunity from prosecution if he agrees to provide damning testimony about his younger brother, Pasquale “Pat” Cinquemani (Vincent Pastore), a powerful Mafia boss. But, in this context, “Queen for a Day,” which—given the plotline of Mr. Ricigliano’s drama—might be intended as a double entendre, is a euphemism for a proffer agreement between a person of interest and a federal prosecutor. According to the online Urban Dictionary (slightly edited here):

In the American legal system “queen for a day” refers to written documents that are designed to create a potential mutually beneficial arrangement with the federal government and a person of interest regarding a criminal investigation. The concept of a “queen for a day,” more commonly known as proffer agreements, permits the accused individual to disclose to authorities key points of knowledge to crimes committed by that person and/or others, with implied assurance that said knowledge will not be used against them in later proceedings.

The setup is that Nino has reluctantly allowed himself to be interrogated by federal prosecutor Patricia Cole (Portia), a tough-minded African-American woman. Patricia meets with Nino in a dreary, abandoned New Jersey warehouse (why always New Jersey?), where she interrogates him in the presence of his lawyer, Sanford Weiss (David Deblinger), who’s himself deeply involved in Nino’s dirty work. Every now and then, the jittery, chain-smoking Nino checks the doorway to make sure no one’s spying.
For the first hour of this 90-minute, no-intermission play, the well-prepared Patricia questions Nino, so we get lots and lots and lots of exposition about his upbringing in Williamsburg, Brooklyn, and his various mob experiences. The chief theme that emerges is about the importance of remaining loyal to one’s family, both the Mafia family at large and that of the Cinquimani family: the mobster brothers and their parents. Nino struggles with the demand that he betray his brother and the mob. Although he’s been married to the same woman for 44 years, he’s had a secret life that forced him to make a terrible sacrifice, and he continues to bear the guilt from what he had to do.
After an act of violence erupts (a gun is revealed early on so we’re not that surprised), Nino’s brother himself appears, and further revelations emerge, leading to a bloody climax that, while a bit far-fetched within this particular story, is nonetheless something that might actually have happened within the ultra-macho world of Mafioso relationships. If you know the fate of made man John “Johnny Boy” D’Amato you'll get my drift.
Mr. Ricigliano’s playmaking is generally tight, his characters sound authentic, there’s a proper seasoning of laughs, and, while he presents reams of exposition, the situation keeps us interested in finding out what’s ahead. This is a play in which lies and secrets are shaved away, which means that not everything is what you think it is, allowing the writer to throw in unexpected twists. There are carefully planted hints for some of these, while others seem to come out of nowhere. And therein lies the rub, as the need to reverse the audience’s expectations can easily tamper with plausibility. Which it does.
Andrea Mincic’s set is a gray, unadorned room with concrete walls, a dirty overhead window, a table, a desk, a water cooler, and some chairs. Shafts of cool light created by Isabella F. Byrd establish a sense of isolation and gloom, but Ms. Byrd has either chosen to keep Mr. Pastore’s face in shadows much of the time or the actor doesn’t know how to seek his hot spot.
Under the usually smooth direction of John Gould Rubin (despite his clumsy handling of the play’s final moment), Messrs. Proval, Pastore, and Deblinger do what you expect of actors who’ve been making their living in this genre: they have the proper moves, accents, and gravitas to convince you of their characters’ reality. (The casting of Mr. Proval and Mr. Pastore as brothers, however, is a stretch.) Mr. Proval, using his fluttering hands to suggest Nino’s jumpiness, is vividly expressive, although his dark, three-piece suit (costumes are by Bobby Frederick Tilley) makes him look more like a banker than the fashion plate described in the script. Portia’s prosecutor is quite well acted, but her role is the play’s most problematic, and, for all its momentary melodramatic effectiveness, ends up leaving us with the play’s biggest unanswered questions.

Vincent Pastore played Big Pussy and David Proval was Richie Aprile on TV’s “The Sopranos,” on which Mr. Deblinger also appeared. Four blocks away, Dan Lauria’s just opened mob comedy, the overcooked DINNER WITH THE BOYS, includes another important “Sopranos” goombah in Ray Abruzzo. Neither play comes close to the quality of that great series, but if this reviewer had to whack one of them, he knows which one it would be.