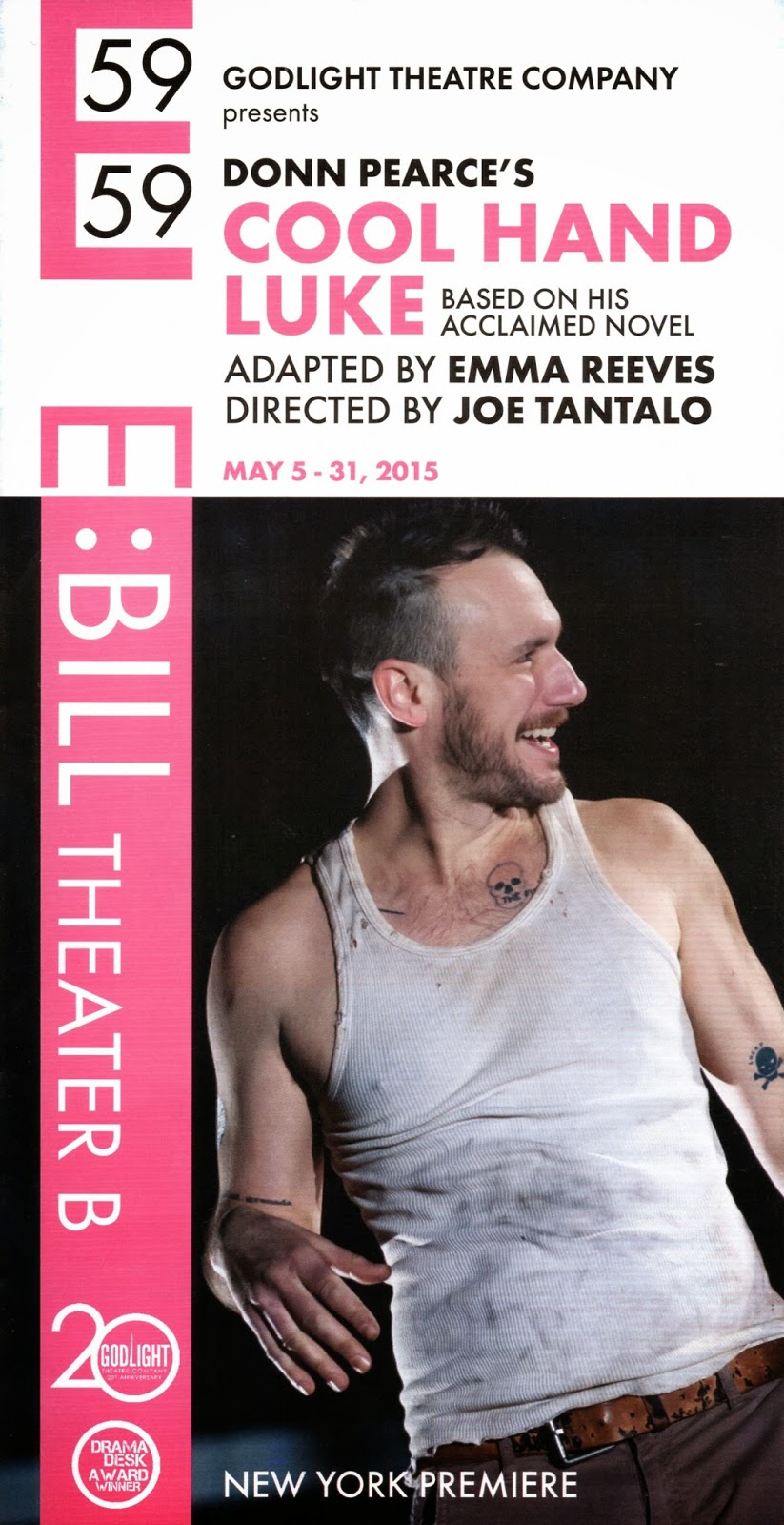 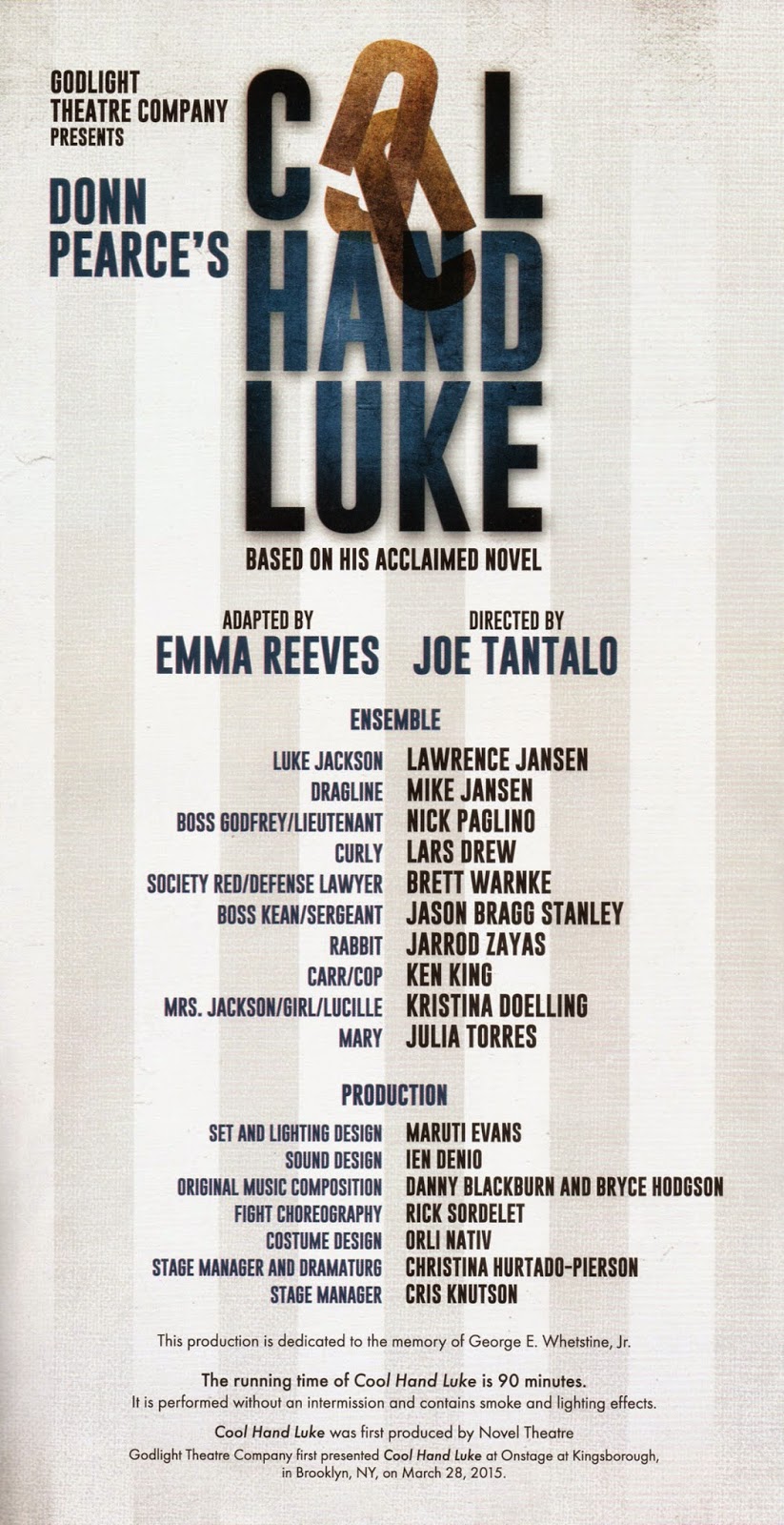 The Godlight Theatre Company, which specializes in inventive dramatizations of modern literature, often of novels well known as films, has returned with an adaptation by Emma Reeves of Donn Pearce’s COOL HAND LUKE. Like Godlight’s compelling version of James Dickey’s DELIVERANCE, seen last season (and, like COOL HAND LUKE, directed by Joe Tantalo), the story is set below the Mason-Dixon line in redneck territory; despite the presence of molasses-thick accents, though, the dramatic terrain differs rather strikingly from Dickey’s story of city slickers adrift in dangerous hillbilly country. Instead, we’re placed on a white chain gang in steamy Florida, where a band of downtrodden convicts is forced to endure physical hardship and deprivation as they crack open the earth with picks. Only with the arrival of a new felon, Luke Jackson (Lawrence Jansen), do their spirits begin to lift.


Even though the play is based on the novel, not the iconic 1967 film version (which explains the omission of the famous "failure to communicate" line), those who know the latter will find it impossible to forget the performance of Luke by Paul Newman, then at the height of his physical beauty. Film critic Roger Ebert even observed, “the physical presence of Paul Newman is the reason this movie works: The smile, the innocent blue eyes, the lack of strutting.” If you saw the movie, you’d have to undergo a lobotomy to cast aside your memories of him, which has to make the task of playing Luke one of the most thankless tasks an actor can be asked to do. And therein lies my biggest reservation concerning this otherwise well-done production.
Luke, whose good looks impress even his buddies, is a rebellious critter who refuses to kowtow to authority (a big reason for the story’s popularity during the protest-filled days of late 1960s America). A decorated World War II hero from Birmingham, Alabama, who’s been sentenced to two years for cutting off parking meter heads, he establishes himself as a man who embodies the prisoners’ dreams and aspirations. A cocky smile fixed on his face, he infuriates Boss Godfrey (Nick Paglino), the sadistic overseer, who brutally punishes his charges to get respect. Befriended by his fellow felons, especially the burly Dragline (Mike Jansen), the antireligious Luke spouts anger at God, shocking even the other prisoners, and mocking a world in which wartime makes killers into heroes. Luke gets his name from his almost supernatural coolness, whether when playing poker, grasping a writhing rattlesnake, eating 50 hardboiled eggs in an hour to win a bet, being beaten or isolated in “the box,” or risking a longer sentence or even death by escaping. Ironically, his fearlessness in the face of oppression makes him seem almost Christ-like (the play has many religious references), a quality only emphasized by the conclusion.
Godlight’s approach to putting this material on stage is similar to that used in DELIVERANCE. Using an adaptation that has stripped all fat from the story so it can be played by 10 actors (a few in more than one role), it dispenses with all props—except for a cane held by the sunglasses-wearing, cowboy-hatted Boss Godfrey (Nick Paglino); rifles, picks, the rattlesnake, and, of course, the eggs, are all effectively pantomimed. Maruti Evans’s masterful use of a limited number of lights, shining through the persistent darkness from above, the sides, and underneath, creates a dark, shadowy world in which the characters take on almost ghostly hues. Transitional moments when the lights snap on are coordinated with Ien Denio’s unique sound design to create a sense of doom, with the aural aura being further heightened by the original music of Danny Blackburn and Bryce Hodgson. As part of the minimalist aesthetic, Orli Nativ’s realistic costumes (the work clothes are so grimy you can practically smell them) remain the same even when an actor plays more than one part.
Lights, mime, sound, simple costumes, and an essentially bare set (credited to Mr. Evans) are, as in DELIVERANCE, all that Mr. Tantalo needs to conjure up the world of COOL HAND LUKE, no matter where the action takes us. What doesn’t take us there, however, is Mr. Jansen, who, despite his obvious ability as an actor, is unable to fill the role of the Christ-like Luke with the kind of magnetism—physical and psychological—it requires. Mr. Tantalo’s DELIVERANCE worked because, regardless of the movie stars in the film version (Burt Reynolds, in particular), the suspenseful story took precedence over any specific character.

COOL HAND LUKE, however, can’t exist without a powerful presence at its heart, a presence that will draw not only the other character to it but the audience as well. Absent that presence, the ending fails to move us as it should; in a work like this that’s fatal. Even the role of Dragline, which won an Academy Award for George Kennedy, is replaceable, as Mike Jansen’s powerful performance demonstrates. Not so the other Mr. Jansen.  Much as the company's work is admirable, their casting limitations suggest that maybe story-driven books and films should take precedence over those centered on a single character of such memorable dimensions.