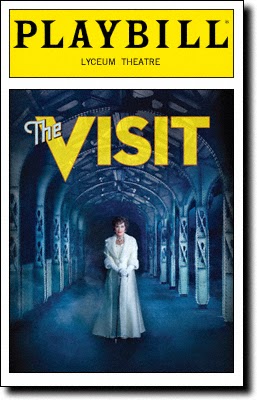 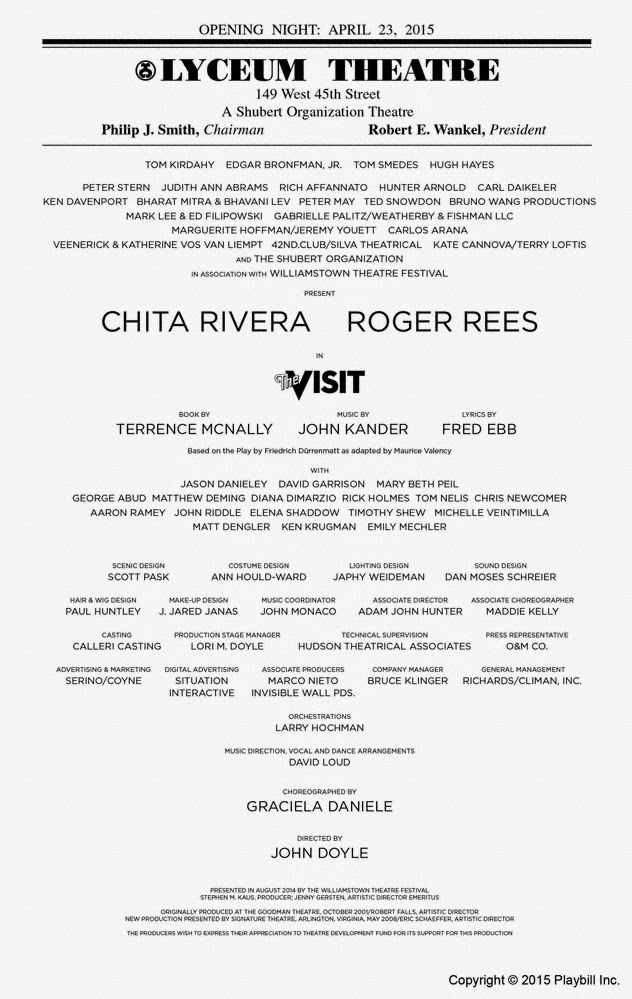 When I was in college in the late 1950s and early 1960s it seemed like barely a season went by without a major New York production of some contemporary European playwright. I still have the paperbacks I bought of plays by that era’s leading Continental dramatists: Anouilh, Giraudoux, Brecht, Durrenmatt, Frisch, Ionesco, and so on, usually in editions published by Hill and Wang or Grove Press. Nowadays, however, important new European plays rarely grace Broadway’s stages, much less Off Broadway’s, and even revivals of the best postwar plays are extremely limited. While technically not a revival, of course, the new tragicomic Broadway musical, THE VISIT, based on Swiss author Friedrich Durrenmatt’s play of that name (Der Besuch der alten Dame in German, meaning The Visit of the Old Lady), provides a Reader’s Digest version of the original that gives a pared-down sense of the playwright’s intentions.
Written in 1956 and produced on Broadway in 1958, THE VISIT was the inaugural production of the Lunt-Fontanne Theatre, with the theatre’s namesakes, Alfred Lunt and Lynn Fontanne, in the leading roles, under Peter Brook’s direction. As can be imagined, the presence of those beloved stars in the theatre named after them was a glorious moment, especially since Durrenmatt’s socio-politically probing play (allegedly inspired by Swiss neutrality during World War II) allowed them to escape the rather limited confines of the drawing room comedies on which they’d been spending too much of their talents in recent years. Chita Rivera, the star of the new musical version of the play, directed by John Doyle, with a score by John Kander and the late Fred Ebb (CABARET, CHICAGO), and a book by Terrence McNally, similarly offers an occasion for celebration, since this glamorous grande dame of musical theatre, the original Anita in WEST SIDE STORY (1957), can still bring it, even at the age of 82.
THE VISIT has been kicking around for a decade and a half. Originally, Angela Lansbury was expected to open in it on Broadway in 2001, but that was shelved when her husband died. Ms. Rivera replaced her for a Chicago opening that year, with Frank Galati directing, but 9/11 interfered with its hoped-for move to Broadway. New York’s Public Theatre was set to produce it with Ms. Rivera and Frank Langella in 2003, but withdrew for lack of backing. Ms. Rivera headed a 2008 staging at Arlington, VA’s, Signature Theatre, and there were later concert versions before a production close to the one at the Lyceum opened at the Williamstown Theatre Festival. It was directed by Mr. Doyle, and included Ms. Rivera and several of the same actors now supporting her, including Roger Rees. Ms. Rivera’s long relationship to the material pays off in a performance of depth, nuance, and superlative theatricality.
Durrenmatt’s three-act play has been condensed by Mr. McNally into a one-act running an hour and thirty-five minutes, just long enough to make its point without belaboring it. Characters have been excised along with a number of plot incidents. The story has been reduced to its essence: The town of Brachen (Güllen in the original), “somewhere in Europe,” has fallen on hard times, but sees in the unexpected visit of a former resident, Claire Zachanassian (Ms. Rivera), the possibility of recovery, since Claire is now the world’s wealthiest woman, the result of her marriages to a series of wealthy men. The town’s leaders are represented by the mayor, Peter Dummermut, (David Garrison); his wife, Annie (Diana DiMarzio); the schoolteacher, Friedrich Kuhn (Jason Danieley); the police officer, Otto Hahnke (Aaron Ramey); and the priest, Father Josef (Rick Holmes).
Also anxiously awaiting Claire's arrival is Anton Schell (Roger Rees), a shabby old shopkeeper who, in youth, was Claire’s lover, but who, after impregnating her, lied about his paternity, leading to her banishment as a prostitute and, eventually, to the child’s death. Claire’s heritage as both a Jew and Gypsy has been added to emphasize the townspeople’s ethnic prejudices; it’s not in Durrenmatt’s play. Anton is now married to Matilde (Mary Beth Peil), and his grown children are Ottilie (Elena Shaddow) and Karl (George Abud). He fantasizes about rekindling his youthful affair when he sings “I Know Claire” and “I Must Have Been Something,” but Claire has other things on her mind.

Claire arrives at the station (designer Scott Pask’s huge, crumbling, overgrown framework serves as the background for all the action), accompanied by two white-faced, blind, tuxedoed, sunglass-wearing, falsetto-voiced eunuchs, Louis Perch (Matthew Deming) and Jacob Chicken (Chris Newcomer), and her towering butler, Rudi (Tom Nelis), also in dark glasses. (The eunuchs committed perjury during her trial, and the butler was the judge.) Claire and Anton are seen both in their elderly manifestations and in their youthful beauty (Michelle Veintimilla and John Riddle), shadowing the main action in song and gentle balletic dance. Claire seeks something far from Anton’s fantasies: his death, for which she offers the needy town 10 billion marks (1 billion in the original, but inflation seems to have upped the ante), and each citizen 2 million each. She seeks revenge, but calls it justice.
The townspeople are at first aghast but, as expressed in the song, “Yellow Shoes,” which shows the townspeople on a mad spending spree, the thought of so much money gradually removes their scruples, even those of Anton’s family, leading to the finally repentant man’s trial, conviction, and execution: he's the sacrifice made on behalf of the town’s collective guilt. (In the 1964 movie version, starring Anthony Quinn and Ingrid Bergman, Claire relents at the last minute, forcing Anton to live among his would-be executioners.) Money rules, and anything can be bought. The town will prosper, but the price is spiritual death.

Ms. Rivera, gowned for most of the show in exquisitely regal white satin, drenched in jewels and fur, coiffed in a short black wig, and carrying a fancy walking stick, commands the stage like the theatre queen she is. Her songs, and those of Mr. Rees, are in the speak-sing style that requires perfect articulation and just enough musicality to stay in tune, but allowing for the occasional big notes that remind you you’re hearing a song, rather than lyrics accompanied by music. When she hits those notes, it’s with a deep-toned voice seasoned thickly with decades of sophisticated experience and awareness. Mainly known as a dancer, she moves with the expected stature and grace, even though Claire reveals that she has a prosthetic arm and leg. The principal dancing (choreographed nicely by Graciela Danielle) is in the hands of the exquisite Ms. Veintimilla and the statuesque Mr. Riddle, each of whom also provides the melodic singing neither Ms. Rivera nor Mr. Rees (especially, Mr. Rees, who acts his songs well but works hard to keep in tune) aren’t required to provide.
Doyle’s lightly expressionistic staging is in his familiar stripped down style, with extraneous sets and production elements removed. Here, a black coffin on casters and an assortment of black luggage serve as multiple-use props, while the cast works both as specific characters and as part of a townspeople’s chorus. They wear costumes suggesting Middle-European garments but everything has been distressed to convey how penniless they are, in sharp contrast to the splendor of Claire’s presence (at the end, after Anton’s death, she switches from white gown and black hair to black gown and white hair). Ann Hould-Ward’s costumes hit the right notes separating poverty from wealth, with yellow touches (on props as well) representing money and consumer goods standing out from the general glumness. Japhy Weideman’s stark lighting provides the proper atmospherics.
The music is easy to listen to, and some of it, like the beautiful ballad “You, You, You” worth hearing many times. Some of it, however, is derivative; I was distracted during the affecting “Love and Love Alone,” during which Claire dances with her younger self, by trying to recall what it so vividly reminded me of. Eventually I realized it was “The Third Man Theme” from the classic 1949 Orson Welles movie, but the distraction restricted my full appreciation. (A theatre journalist I ran into in the lobby had the same experience.)
THE VISIT’s Brechtian ambiance left me emotionally distanced, but my wife was moved, and I can’t vouch for why a woman I passed as I exited up the aisle was wiping her eyes. Although my own sense is that the show hasn’t long for this world, if you’re going to make a visit of your own you’ll at least have the rare opportunity to see a consistently dark, but well produced and meaningful musical on the Great White Way, and the even rarer one of watching a legend like Chita Rivera (she gets a big laugh saying, “I’m unkillable”) putting a long, long lifetime of theatrical artistry to work in a very engaging way.
THE VISIT
Lyceum Theatre
149 West 45th Street
Open run