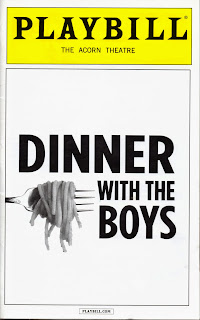 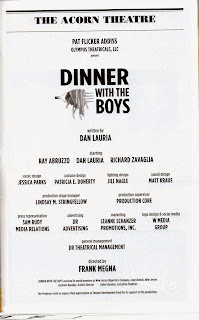 I really, really, really wanted to like this dark comedy about the mob, since you never want to mess with the wise guys. DINNER WITH THE BOYS, at the Acorn on Theatre Row, certainly has a lot to recommend it: it’s written by actor Dan Lauria, a fairly frequent presence on the New York stage best known for TV’s “The Wonder Years”; it stars Mr. Lauria and two other talented Italian-American actors, Ray Abruzzo (“The Sopranos”) and Richard Zavaglia (DONNIE BRASCO): its popular, extended showing last year at Long Branch’s New Jersey Repertory Company, with the same cast, got warm reviews, including one from the New York Times; and it’s a Mafia comedy, a subgenre that's produced such well-known movies as THE GANG THAT COULDN’T SHOOT STRAIGHT, WISE GUYS, and ANALYZE THIS.
Plays about the mob—comic or serious—aren’t common, however. Two seasons ago, the Beckett Theatre (in the same building as the Acorn) offered the mob comedy PHILOSOPHY FOR GANGSTERS, and a friend has been working for several years on SERRANO: THE MUSICAL, an adaptation of CYRANO DE BERGERAC set among the gangsters of Little Italy. As chance would have it, another play that just opened, A QUEEN FOR A DAY (see my next review), is also about the mob, but, like the bulk of movies and TV shows on the subject, it’s deadly serious.

After the lively pre-show music (the sound designer is Matt Kraus) sets the tone with (mostly) 1950s pop tunes sung by Italian-American crooners, a Brooklyn-accented voice on the loudspeaker requests us to turn off our cell phones and mock-threatens us that we will enjoy the show. The lights come up on a realistically detailed eat-in-kitchen, designed by Jessica Parks, chock-full of homey touches, including a copy of “The Last Supper” over the upstage door. Residing here are Charlie (Mr. Lauria) and Dominic (Mr. Zavaglia),  two aging goombahs floating in domestic limbo for half a year in “the wilds of New Jersey,” waiting to find out how they’re going to be punished for failing to bump off a friend and fellow hoodlum named Leo. Dom, the Felix of this odd couple, is an obsessive cook who can’t stop talking and thinking about Italian food, while Charlie, the Oscar, grows veggies in the garden that Dom uses in his recipes. As they await their fate, they spend the time eating Dom’s specialties and reminiscing about the gruesome hits (like burning someone to death in a pizza oven) they witnessed during 30 years of faithful service.
Soon, their fearsome new boss, Big Anthony, Jr. (Mr. Abruzzo), appears in the doorway—dressed in black, fedora on his head, and dramatically backlit in blue—and, as casually as if he were telling him to swat a fly, orders Charlie to kill Dom. From here on, what’s already being played on steroids goes to the next level, as Mr. Abruzzo feasts manically on Dom’s cooking and Dom and Charlie find a way to slice and dice through their dilemma. In act two, Junior’s successor, “the Uncle Sid” (also Mr. Abruzzo), an elderly Jew with a Dr. Kronkite accent and a silver toupee that looks like something dead, arrives, with a couple of young goombahs-in-training outside in the car. Charlie and Dom may never have heard of SWEENEY TODD, but if you’re ever hungry while driving through New Jersey and spot a joint advertising Charlie and Dom’s Fine Northern Italian Cuisine, allow me to suggest you try Pizza Hut instead.

Mr. Lauria wants to satirize the violence associated with Mafia-based movies, TV shows, and plays (serious and comic) by exaggerating it to the nth degree. He even has a scene where Charlie and Dom react with distaste to the news of war and violence in the newspaper, as if only the murders the mob commits are justified.

CHARLIE: You got a beef with a guy. He’s a rat, a stoolie, some kinda scum who don’t know for what’s right. Take ‘em out. Kill his ass. That I understand. But blowing away a dozen guys because your feelings is hurt?! Unarmed guys?! Kids for Godsakes. I mean what kinda cowardly bullshit is that? Let me tell ya, Dom; “Me and Leo done a lotta guys in our time, but I can say here and now, there wasn’t a one that didn’t have it comin’.” Punks, stoolies, guys who welched on their bets, but never without cause; a justifiable cause. You know what I mean?

He goes too far, though; the Grand Guignolish brutality Mr. Lauria both describes and depicts is so broadly presented and grotesque, and the offensive characters who stand behind this heinous behavior so caricaturish and clichéd that, for all the superficial comedic charm they try hard to project—as if poisoners, knifers, throat slitters, and people burners are really lovely people with tough guy accents—any sympathy one might have for their predicament turns (like that guy in the oven) to ashes. One of Charlie’s stories, for example, describes the killing of an overweight female bookie who was thrown off the Brooklyn Bridge with a noose around her throat only for her head to be snapped off when the rope stopped while the killers stood there enjoying its rhythmic swinging with the head still attached. Macabre comedy is common enough, of course, on both stage and screen; here, however, the humor struggles to overcome the horrific circumstances it’s meant to make fun of.

Under Frank Megna’s overheated direction, all three actors, who have done excellent work elsewhere, seem to be willing the audience to laugh by overplaying, shouting, and otherwise doing all they can to say, “Isn’t this funny?” Mr. Abbruzzo's Big Anthony in particular chews almost as much scenery as he does Dom's highly seasoned meat. I suspect a drier, deadpan approach might prove more appropriate for this material than such overt pushing. I don't deny that some spectators (not in my vicinity, though) laughed lightly at the ridiculous antics, mangled language (i.e., “Leo used ta say I was a regular raccoon-a-teur”), winking references to tiny meat and shrimp balls, and a desperately unfunny string of comments about Greeks; laughing is certainly easier than getting whacked.

In recent years there have been many complaints by different ethnic groups about the disrespectful ways in which their backgrounds have been mocked or misrepresented by movies, plays, and TV shows. Despite its enormous popularity, even “The Sopranos” came in for lots of criticism for its allegedly one-sided image of Italian-Americans. Ethnic humor, especially, is often under attack, as witness the fuss being made of late by Native Americans about their depiction in an Adam Sandler movie. Personally, I enjoy good ethnic humor, whether it’s my own ethnicity or another’s that’s being mocked. Take it away, as some would like to do, and the field of comic targets is seriously diminished. On the other hand, if I were one of the activists who went after “The Sopranos,” I don’t think I’d get much pleasure out of DINNER WITH THE BOYS, which makes Tony Soprano look like a saint. Capish?