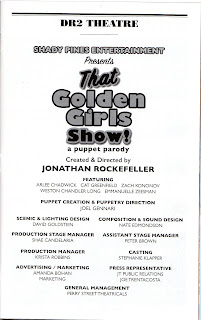 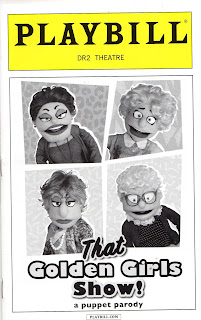 The latest entry in the Off-Broadway TV parody-show sweepstakes (Saved by the Bell, Full House, Beverly Hills 90210, 3C, etc.) is Jonathan Rockefeller’s slender but sweet Australian import That Golden Girls Show!—A Puppet Parody. The show itself is a follow-up to another Rockefeller puppet show about the same characters, Thank You for Being a Friend, which hasn’t yet reached these shores.

That Golden Girls Show! may be subtitled a parody, but it’s really more an homage and will appeal primarily to people who regularly watched the multi-award-winning TV original, “The Golden Girls,” which produced 180 half-hour episodes between 1985 to 1992. It’s been in rerun heaven ever since and has spawned numerous localized versions in countries around the world. It also inspired a 2003 Off-Broadway musical played in drag, The Golden Girls: Live that was forced to close because of a rights problem. One hopes the rights for That Golden Girls Show! are secure.
There may be a few outliers who never saw “The Golden Girls” so, for those deprived souls, let me note it was a classic sitcom set in a house at 6151 Richmond Street, Miami, owned by the sex-obsessed, Tennessee Williams-accented widow, Blanche Devereaux, and shared with three other ladies of a certain age, Sophia Petrillo, the geriatric, outspoken, Sicilian widow from Brooklyn, who moved in after her retirement home burned down; her dryly ironic daughter, Dorothy Zbornak, who divorced her husband, Stan, after he had an affair with a flight attendant; and the delightfully vacuous Norwegian American, Rose Nylund, from St. Olaf, Minnesota. The actresses who created these roles, Rue McLanahan, Estelle Getty, Bea Arthur, and the ageless Betty White (the sole survivor), respectively, are sitcom legends.
In That Golden Girls Show! those hilarious broads are back, transformed into Avenue Q-like, rod Muppets (large heads, movable mouths, and only upper bodies and hands) manipulated by actors in black; puppet creator Joel Gennari does a great job directing their use. The actors, who perfectly synchronize their facial expressions and body movements with those of their avatars, and speak all their lines in character, include three women—Cat Greenfield as Blanche, Emmanuelle Zeesman as Sophia, Arlee Chadwick as Rose—and a man, Michael LaMasa (replacing Weston Chandler Long), as Dorothy. Bea Arthur, the original Dorothy was notably tall and mannish, so when LaMasa and his puppet enter and deliver a line in Arthur’s deadpan rasp, the laugh meter jumps. The accuracy with which the cast nails the originals' distinctive vocal and physical mannerisms is the show's most memorable feature.
There's one other person involved, the mustachioed Stan, Dorothy’s ex, played by Zach Kononov as a short, schlubby version of the TV character portrayed by Herbert Edelman, who was well over six feet tall. Kononov uses no puppet but his cartoonishness is underlined by his terrible toupee, an allusion to the rugs Edelman’s Stan affected when he wasn’t showing his bald pate.
Squeezed onto DR2’s tiny stage is a reduced-size facsimile of the original’s living room and kitchen, designed and lit by David Goldstein; despite the limited space, Rockefeller, who also directed, makes the most of his limitations, moving his five actors and four sizable puppets about without clumsy crowding.

For the first half of the 90-minute, intermissionless show, which preserves the series’ narrative style, we watch the popular characters go through their usual paces with barely any plot concerns. They toss around the zingers, many based on references regular viewers will recognize, such as Blanche’s vanity and sexual hunger or Rose’s preoccupation with St. Olaf. And, of course, there’s cheesecake. Blanche’s flirtatiousness flourishes, Rose asks clueless questions at which Dorothy flings sarcastic darts, and Sophia’s mouth is a blunt weapon. The second half is more plot-oriented, focused on Stanley’s need to marry one of the women so he can inherit a lot of money, and the complications that ensue when each woman becomes a potential bride.

The show's gleam comes from how well the performers capture the personalities of the beloved stars with puppets that wonderfully caricaturize their originals. The script itself, aside from its occasionally raunchy (but not particularly vulgar) dialogue, could almost stand in for a “Golden Girls” episode; the problem is that, for all its humor, it simply fails to be as funny as the series, and depends more on our nostalgic responses than on anything very original.

After seeing the show I checked out some "Golden Girls" highlights on YouTube, exploding in frequent guffaws too rarely experienced in the theatre. The lack of a laugh track to underline the dead spots makes this even more obvious. The TV episodes work, even when not consistently funny, because they're only half an hour in length; a 90-minute episode without those well-placed laughs proves that all that glitters is not gold.