"In the Name of the Mother, the Daughter, and the Shrink" 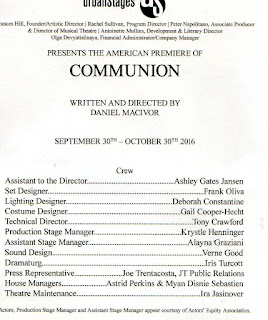 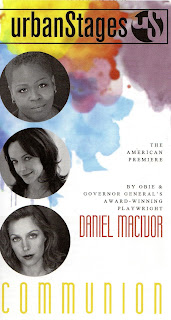 There’s an exchange in the third scene of well-known Canadian playwright Daniel MacIvor’s 2010 play Communion, having its New York premiere at Urban Stages, in which someone asks a therapist whether people don’t fall asleep in her comfortable, armless chairs. The therapist replies: “Sometimes people have fallen asleep.” I imagine the same thing happening now and then to viewers of this dreary, 90-minute, intermissionless production, directed by the playwright. The first of its three scenes, especially, is slumber-inducing with its frequent, lengthy pauses as a middle-aged analysand, Leda (Stephanie Cozart), sitting in one of the aforesaid chairs, struggles to find something to say to her immobile, stone-faced therapist, Carolyn (Erica Bradshaw).
The play opens with a soliloquy by Carolyn (Erica Bradshaw), a lesbian therapist, in which she ruminates, metaphorically, about “the question we fill our days to avoid,” as we sit alone in the dark at night, a question about what’s waiting for us beyond the door from behind which a bright light glows. (I can't speak for you but this isn't a question I ask myself at night.) That image, which turns up several times, perhaps is meant to suggest our unnecessary fear of what the future holds in store, or what awaits us when we’re gone. Whatever it means, it's little more than dramatic folderol.

Following the monologue, we wait endlessly for Leda to speak as she squirms, fidgets, and groans. Finally, Carolyn says “You appear agitated” (playwriting understatement of the year) and we watch a stutter-stop therapist/client (a word Carolyn prefers to "patient") session in which Leda, angry and sarcastic, struggles to answer the queries of the sphinxlike therapist (who’s got her own issues). If you’ve ever seen the HBO series “In Treatment,” you’ll know at once how much is missing here in the actors’ inability to fill the many blank spaces with effective interior monologues.

Leda’s a recovering alcoholic who’s estranged from her daughter, Annie (Jackie Hansen, giving the most effective performance), from whose father she’s divorced. Leda, raised Catholic, doesn’t believe in God; Annie’s a born-again fundamentalist who served time for burning down an abortion clinic. Leda wants to reach out to Annie, to tell her that she’s dying, but feels the need for Carolyn’s agreement; the laconic Carolyn finally succumbs despite thereby betraying her professional standards.
When Leda and Annie do meet, in a hotel room in the city where Annie, six months pregnant, is living with her father and his second wife, they have difficulty connecting. Leda appears so much more in control of herself in this scene that she seems almost a different person from the one we saw earlier; it’s Annie who comes off as overwrought and bitter, even though she’s a hellfire and brimstone believer who wants to “redeem” her mother, which the atheistic Leda sharply rejects.

In the final scene, months later, Annie is visiting Carolyn. Much has changed for everyone. Just as Leda in scene two differed from Leda in scene one, so do both Annie and Carolyn differ from their earlier scenes; or, perhaps, they’re merely showing other sides of themselves. And, while the consistently cynical and angry Annie (who even suspects Carolyn--herself an unbeliever--of having been Leda’s lover) is still troubled, we see as well that Carolyn, the would-be healer, is likewise in need of healing. Don't we all need a bit of the human connection called communion?
Frank Oliva’s sets for the office and hotel room are simple—mainly selective furnishings in a black box—and Deborah Constantine’s lights create the proper mood. Gail Cooper Hecht’s costumes are generally satisfactory; however, while I can understand why the Bible-thumping Annie first dresses down in a shapeless, floral dress with sneakers and sweat socks, I don't get the switch several months later to a much hipper look of short shorts over black tights. Has she evolved that much? Whatever happened to cause this transformation gets little clarification.

There’s surely a better (and funnier) play here than what comes across in this production, which I ascribe to the unilluminating performances of Crozart and Bradshaw and MacIvor's bland direction. The interesting issues at stake (the values of psychotherapy, the conflict between atheism and evangelism, abortion politics, sexuality, etc.) all come off as little more than background color to a not very moving mother-daughter conflict. Let’s hope the upcoming stage adaption of Terms of Endearment provides the mother-daughter emotional heft that’s missing in Communion.