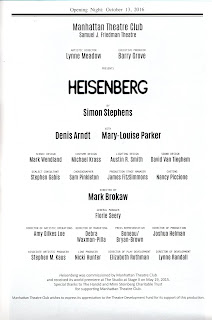 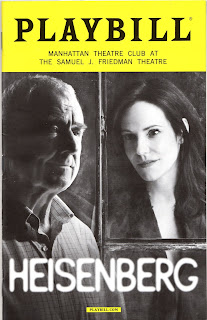 Over the past few years, British playwright Simon Stephens has made an indelible impression on and Off Broadway with plays such as Harper Regan,, Punk Rock, and the Tony-winning The Curious Incident of the Dog in the Night, not to mention his version of A Doll’s House. Stephens’s latest effort, Heisenberg, a slender two-hander starring Mary-Louise Parker and Dennis Arndt as May-December lovers, while not up to the best of his previous work, nonetheless satisfactorily fills 80 intermissionless minutes at the Samuel J. Friedman Theatre.


The Manhattan Theatre Club’s season opener, now on Broadway after its spring run at the City Center’s intimate Studio at Stage II (which I didn’t see), offers rich, intelligent dialogue, crisply efficient staging, two strong actors, and a situation and characters that require swallowing with more than a single grain of salt. Presented with no props or conventional scenery (the design is by Mark Wendland) on a stage fitted with steep bleachers holding around 200 spectators facing those in the orchestra proper, the show uses only a couple of tables and chairs shifted after each scene by the actors themselves. The effect, highly polished as it is under Mark Brokaw’s crisply efficient direction, more closely resembles a rehearsal run-through than a complete production.

Michael Krass’s costumes, which—except for a couple of jackets—remain the same throughout (faded, beltless jeans, sockless slip-ons, and a button down cotton shirt for Arndt, tight pants and a sleeveless top for Parker), regardless of time’s passing, further sharpen the focus on the performances. Fine support is delivered by Austin R. Smith’s lighting and by David Van Tiegham's sound design, which includes a metallic pop perfectly synchronized with the burst of light at the end of every scene.
Heisenberg begins just after Georgie Burns (Parker), 42, an American woman living in London, who works as a primary school receptionist, kisses on the neck a total stranger sitting on a bench at the St. Pancras station. He’s Alex Priest (Arndt), 75, an Irish butcher. The talky Georgie, who keeps asking Alex personal questions, is a peculiar creature, played by Parker with a quirky intensity and air of desperation that invades her every move, gesture, facial expression, and vocal inflection.

Georgie is charming and annoying, friendly and grating, while Alex, reserved and modest, is disturbed by her unforeseen attentions yet magnetized by them. She is, of course, attractive, as is Alex, who, even in his middle 70s, looks much fitter than any aging butchers I’ve ever met (including my father). Initially entranced, then put off, Alex is unable to escape her persistent pursuit; she even uses Google to find out where his failing shop is located. They become lovers until Georgie reveals what’s been up her absent sleeves all along.
The play’s never-mentioned title, which has nothing to do with the alias taken by Walter in “Breaking Bad,” refers to theoretical physicist Werner Heisenberg and his principle of uncertainty, which you can read about here. It declares, says one source, that “the position and the velocity of an object cannot both be measured exactly, at the same time, even in theory. The very concepts of exact position and exact velocity together, in fact, have no meaning in nature.” Thus the unpredictable sequence of events that comes from the collision between Georgie’s unstable personality and Alex’s carefully regulated one.
Whether knowing this makes a difference is another matter. It may add a soupçon of intellectual spice but you don’t need a degree in quantum mechanics to appreciate the twists and turns in the characters’ relationship, or the idea that chance encounters can result in unexpected consequences. Most audiences will appreciate the play as an amiable, straightforward romantic dramedy between an elderly man and a younger woman, each in need of filling a well of loneliness. You do, of course, have to make allowances for dramatic license.
Heisenberg asks you to believe that the still nice-looking butcher has had only one serious love affair; that he has no one else to talk to but the ghost of his late sister; that he has a certain eloquence (as when he speaks of the “seams” that hold animals together); or that, when asked about his tastes in music, he can rattle off an endless stream of genres that even an expert might stumble at (from rock and roll, rhythm and blues, gospel, country and western, to mod, garage rock, and psychedelic, to indie pop, new romantic, techno, and dub step, etc.).
You also have to decide how you’d react to Georgie’s verbose onslaughts, even when she admits to lying about much of what she’s revealed. Most old men, even if lacking friends or family, might demur from establishing a relationship with such a potentially unbalanced person, although the lurking possibility of sex might serve as a preventative from doing so. Many others might simply have found Georgie an obnoxious pest and told her to bugger off.
Parker puts her vigorous imagination to work as Georgie, leaping from emotion to emotion like a thespian gymnast, but, as in much of her other work, she isn’t entirely free of actorish mannerisms. Arndt, in contrast to her continuously high-decibel theatrics, is the quiet ballast that keeps the play grounded, his demeanor steady as a rock, even in moments of uncertainty. (The 77-year-old actor, by the way, is making his Broadway debut.)
Heisenberg is a romantic fantasy in which chemistry does noble battle with physics.
OTHER VIEWPOINTS:
Show-Score.com
Heisenberg
Samuel J. Friedman Theatre
261 W. 47th St., NYC
Through December 11