“Tick of the Town” 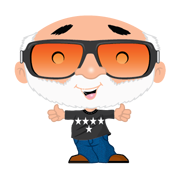 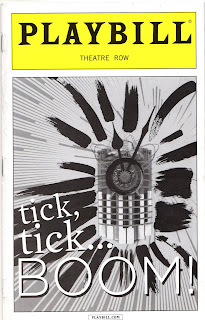 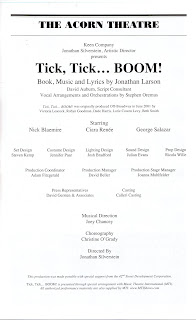 The 1996 death at age 36 of the as yet little-known composer-lyricist-librettist Jonathan Larson, caused by an aortic aneurysm, on the night before the first Off-Broadway preview of his soon-to-be megahit Broadway musical Rent, is one of the most poignant events in recent theatre history. It’s impossible to tell what Larson would have produced in Rent’s wake but the outstanding new revival by the Keen Company of his less well-known autobiographical musical Tick, Tick . . . BOOM!, created years before Rent, gives us an opportunity to confirm, even in this early work, just how rich a talent he possessed.
Created as a “rock monologue” in 1990, when Larson began performing it (under different titles) at a series of Off-Off-Broadway theatres, it was posthumously revised in 2001 by David Auburn (Proof). He converted it into a piece for three actors, one playing the Larson-based Jon and the others portraying both his best friend, Michael, and his girlfriend, Susan, as well as various peripheral roles, including Jon’s parents and agent.

Auburn’s version received an award-winning production at the Jane Street Theatre (its run disturbed by 9/11), with Raúl Esparza as Jon; produced an original cast recording; toured nationally; and had multiple American and international productions. It even received a New York Encores! presentation in 2014 with the pre-Hamilton Lin-Manuel Miranda playing Jon, his Hamilton costar, Leslie Odom, Jr., as Michael, and Karen Olivo as Susan. So, while Tick, Tick . . . BOOM! somehow passed me by (I was never a Rentboy), Jonathan Silverstein’s brilliant staging (abetted by the limited but just-right choreography of Christie O’Grady) at Theatre Row’s Acorn did what its title promises and blew me away.
Tick, Tick . . . BOOM! is an “intimate musical,” running an intermissionless hour and a half. Steven Kemp has provided a minimal set (a few pieces of furniture rapidly shifted by the actors) on a mostly bare stage over which hangs an off-kilter structure resembling a graffiti-decorated ceiling with four windows in it (used for terrific lighting effects by Josh Bradford). There's a small, onstage orchestra (piano, percussion, guitar, and bass) led by musical director Joey Chancey. And the tiny cast could barely be bettered, with Nick Blaemire (looking not very unlike Jon’s creator), and George Salazar and Ciara Renée as Michael and Susan.
Explosively talented, with distinctive faces Al Hirschfeld would have loved, this gifted singing-dancing-acting trio takes us on a mostly rock-infused journey through Jon’s travails in 1990 (mostly true, it seems) as he seeks to get a workshop production for his musical Suburbia. Working as a waiter and living in a cruddy, sixth-floor, Soho walkup, Jon, an artsy-looking, suspenders-wearing dude in downtown grunge (the perfect costumes are by Jennifer Paar), is torn between his passion for a career as a musical theatre writer and the lure of a well-paying corporate job.

Representing the latter is his successful, childhood friend, Michael, a gay man who, as played by George Salazar, is a sweet-faced, slightly husky gent with a well-groomed pompadour; Michael himself made the decision he wants Jon to make by abandoning show biz for a job paying off in tailored suits, luxurious apartments, and fancy cars. Further stressing Jon out is his stylish girlfriend, Susan, a dance teacher (to whom Ciara Renée brings a toothy, 1,000-watt smile), who wants Jon to earn a secure living away from New York so they can raise a family.
The title, as Jon informs us, is the sound of his growing anxiety as he approaches 30 with the looming need to make the choice of his life. By the feel-good conclusion, he’s able to accept his age and play his piano loud enough to drown out the tick-ticks as he joins with his friends in singing that “actions speak louder than words.”
This schmaltzily clichéd story includes not only a conventional romantic subplot but a development toward the end that seems uncomfortably melodramatic, regardless of whether it actually happened. There’s no escaping the fact that we’re willing to buy all this because of the sad irony we feel at comparing the ambitious ideals of the character Jon with what happened to the real Jon just at the moment when all he’d sacrificed for came true.
Larson’s emotional investment and his verbal and musical imagination go far in turning narrative dross into theatre gold. While not every song is dynamite—several sound similar to other musical theatre numbers—enough are standouts to make them worth waiting for. Larson’s debt to his idol, Stephen Sondheim, is incorporated in the script, including the wonderful song “Sunday,” an homage to the song of that name in Sunday in the Park with George. My least favorite songs are the ones requiring Jon’s Billy Joel-like piano-pounding, while my favorite would probably be a toss-up between Susan’s powerhouse “Come to Your Senses” and the very clever “Therapy,” which grows naturally out of a fraught conversation between Jon and Susan:

This revival of Tick, Tick . . . BOOM! deserves an extended run. But just in case it doesn’t get one I recommend that you hasten down to 42nd Street and see what all the ticking’s about.