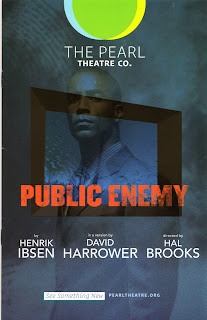 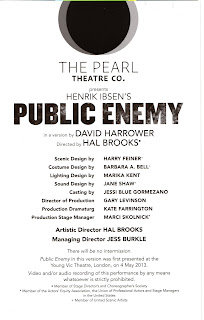 What with the news of the inept, perhaps criminal, political response to lead being found in the water of Flint, Michigan, it was only a matter of time before yet another revival of Ibsen’s An Enemy of the People, also about toxic water, was dredged up to remind us of that great dramatist’s prescience. The 1882 play’s various themes, including the conflict between truth and self-interest and its questions about the validity of majority opinions, remain pertinent, especially at times like these when widespread dissatisfaction with our political leaders and the despoilment of the environment roils the nation.


For all their continuing bite and relevance, Ibsen’s ideas are embedded in a dated drama that is difficult to effectively embody on stage, as the dull 2012 Broadway production revealed. This has inspired several updated adaptations that attempt to make his characters and plot more immediate, one example being Scottish playwright David Harrower’s (Blackbird) version, retitled Public Enemy, first done at England’s Young Vic in 2013 and now being presented by the Pearl Theatre Company.

Harrower, while retaining the setting of a small Norwegian town (or so it would appear), has radically revised the script to sound colloquial and look contemporary, with its five acts squeezed into a brisk 90, intermissionless minutes. Harry Feiner’s setting is a wide, paneled room in starkly modernist style, dramatically lit by Marika Kent; its wooden tables and squared-off, uncomfortable-looking chairs, rearranged for each locale, echo the wooden walls.
The set suggests the cold realities faced by the central character, Dr. Stockmann (Jimonn Cole), when the townspeople—led by Stockmann’s obnoxious brother, the mayor (Guiesseppe Jones)—turn against him after his research shows the water has been poisoned by the tannery of Stockmann’s father-in-law, Kiil (Dominic Cuskern). Since the town hopes to thrive from visitors coming to bathe in its spas, and the cost of fixing the problem is prohibitive, Stockmann, the would-be savior, becomes a public enemy, even the liberal newspapers turning against him. He and his family are attacked but, refusing to leave, he vows to stay on and start a school.
The essential issues remain in place but everything has been brought to the level of agitprop melodrama. Whatever its value in reducing the play’s themes to a high-school civics class lesson (the first row when I attended was filled with enthusiastic high-school kids), Harrower’s adapting the play to a present-day context simply doesn’t work. It’s not credible for Kiil, for example, to be so ignorant of the fact that bacteria can’t be seen by the naked eye and use that as an excuse to dismiss Stockmann’s claims.

Or for the printer Aslasken (John Keating, usually so interesting but here quirkily unconvincing) to think he can stop Stockmann’s words from getting out by refusing to print them. In fact, all the arguments to stop Stockmann from informing the world of his research become meaningless in the Internet world. A laptop makes its presence known in the staging, but I guess nobody in Norway knows how to use it.
And why doesn’t Stockmann call for additional scientific support for his findings? Is he the only scientist in Norway? And how can the townspeople ignore scientific findings that will cause major health problems merely because to do something about them is too expensive? Won’t the eventual expense of dealing with the results be even worse?
It’s easy to accept the skepticism about scientific evidence in an 1882 context, which would allow the people to rationalize their decision based on inadequate general knowledge. But in 2016? It’s not enough to argue about the ignorance of today’s climate change deniers; that issue, for all its potential relevance on another plane of discussion, doesn’t apply on this one, where the evidence is being presented in advance of the problem it’s intended to prevent, and in public, not in a political backroom.
Would an entire town knowingly ignore scientific conclusions and invite potential catastrophe merely because of self-interest when that self-interest is itself bound to be destroyed? It’s questions like these that may drive you crazy as you watch these otherwise clueless people go about their business. On the other hand, there are enough provocative nuggets scattered here and there to stir your thoughtful ire.

The production itself, directed by Hal Brooks, is awkward and overwrought, the acting (or, too often, overacting) mediocre. Cole’s Stockmann has his moments, especially when his anger boils over during his extended speech at a public hearing (staged to make the audience complicit in his downfall), but nothing he does can make this Stockmann other than a cardboard hero. As for the supporting company, some of whom have done much better work before, the less said the better. Best not to become a public enemy, after all.