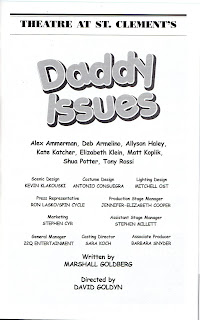 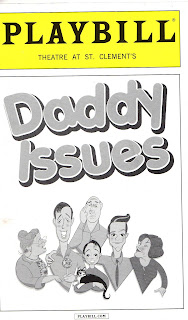 Poor Donald Moscowitz. It’s 1982 and he’s a gay, 30ish actor, struggling to land a cat food commercial; at the same time, his family, which objects to his career choice and sexual orientation, is pressuring him to get married and have a kid. His bubbe, in fact, has promised to double his inheritance if he complies; however, despite complaining that her bladder’s “dropped,” she’s been threatening to pop off for years while never inching a step closer to the grave. Oy vey, what’s a nice Jewish boy gonna do about a problem like this?

What Donald does in Daddy Issues, Marshall Goldberg’s splutteringly amusing, old-fashioned farce, is to try and pass off a neighbor’s kid, called Johnny Walker (Alex Ammerman)—you eventually learn why—as his ten-year-old son. He falsely explains the boy’s existence by telling his father, Sid (Tony Rossi), he’s been hiding him because the boy was conceived out of wedlock.
The multiple expected falsehoods and complications pile up, compounded by the presence not only of Donald’s overly familiar Jewish family—the worried Sid, the controlling mom, Marion (Kate Katcher), and the kvetchy Grandma Moskowitz (Deb Armelino)—but of his super-swishy drag queen friend, Levi Krauss (Shua Potter), and his casting director pal, Henrietta Hudson (Elizabeth Klein), whose abundance of avoirdupois sets up a string of fat jokes. Admittedly, it wasn't the best week for that kind of humor.
You’ve seen a variation of this substitution plot device somewhere before, of course, either in movies, on TV, or on the stage (think Charlie’s Aunt). Daddy Issues is the kind of play that should drench you in a storm of hilarity; there are laughs, of course, but instead of a storm we get a drizzle with an occasional thunderclap.

For one thing, Donald may be a nice Jewish boy but it’s hard to find funny the inherently cruel situation of a guy trying to deceive his loving family about the very thing that means the most to them; it slices painfully through the comedy's otherwise genial spirit. For another, the scheme itself, given how soon it’s bound to be unraveled, is so foolish, that, unless handled with comic genius, the situation has zero credibility. Goldberg creates a suitably complex farcical structure but he’s no comic genius.
The hour and a half, intermissionless action takes place in Donald’s New York apartment, painted bright cantaloupe, and inexplicably intended to suggest his decorative talents. Kevin Klakouski’s living room set, in fact, is blandly unattractive and theatrically clumsy; the two most prominent chairs, upholstered in white leather, are high enough to serve as bar stools, forcing the actors’ feet to dangle inches from the ground when they're not gripping the crossbar for stability.

David Goldyn’s staging is awkward and his pacing uneven. The actors struggle to find the right tone between campy farce and the basic realism necessary to make the outlandishness believable. Audiences will warm to Potter’s stereotypically flamboyant Levi, wisecracking excesses included (his stage name is Ophelia Crotch), especially when he dresses in drag to pass himself off as the boy’s mother, but he’s in another world. Katcher does a nice turn as a warmhearted mother who suddenly finds her deepest wishes fulfilled. And the adorable Ammerman turns in an appealingly cute job as the clever kid.

As the macho Sid, who makes metal balls (his “balls are the best in the business"), Rossi is suitably grounded; Klein has several good moments as Henrietta, making comic hay of her heft; Armelino’s Cabbage Patch grandma is an audience-, if not critic-pleasing, cartoon with a klutzy Yiddish accent; and Allyson Haley, as the shrieky Mary Ellen McGuire, Johnny Walker’s real mother, an alcoholic (hardy har har), shrieks so much she tends to be more banshee than human. At the opposite end of the spectrum, Matt Koplik, in the central role, is generally colorless; still, with so many "characters" around him his averageness works.

Daddy Issues ran earlier this year at the Davenport, with three of the current cast members involved (Katcher, Rossi, and Ammerman), and received mixed reviews, but little that you’d think would encourage a return engagement. Obviously, someone up there likes it, and the audience when I attended certainly seemed to. This daddy, however, had his issues with it.