“Some Plays Are More Equal than Others” 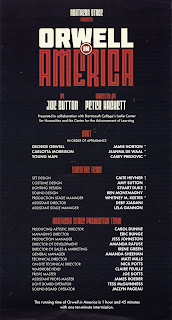 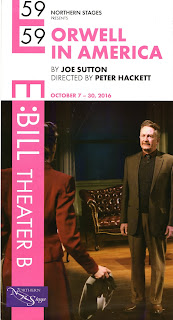 There couldn’t have been a fitter venue for the world premiere of Joe Sutton’s Orwell in America than Northern Stages, located in Vermont, Senator Bernie Sanders’s home state. Sanders, after all, like the eponymous hero of Sutton’s play, is an avowed “social democrat,” a political designation widely misunderstood or mischaracterized as “communist”; just witness Donald Trump’s ignorant blast at Sanders in March. If the term social democrat still confuses you, I suggest a visit to 59E59 Theaters, where the thoroughly engaging Orwell in America is now playing, with most of its original creative team intact.

I usually have hu-u-ge reservations when it comes to biodramas about literary figures, who can be rather boring when transported from their writing desks to the stage, unless there’s something particularly worthy of dramatization in their lives.  Sutton’s solution is to create an entirely fictional situation that allows him to introduce us to Orwell’s (Jamie Horton) personality and ideas, with a minimum of fuss about biographical details. His device is to imagine Orwell (who reminds us that this is a nom de plume for his real name, Eric Blair) on a cross-country book tour of America in what appears to be late 1948 (toward the end, his “new book,” 1984, published in 1949, is mentioned). The work he touts on tour is his 1945 allegorical novel about totalitarianism, Animal Farm, which contains one of the most memorable lines in political fiction: “All animals are equal but some animals are more equal than others.”

In actuality, Orwell never came to America so everything in the play is a “what if” fantasy. Within those “what if” boundaries the play imagines that Orwell’s publisher arranged for him to be accompanied on the tour by a general factotum in the form of a beautiful, 28-year-old woman named Carlotta (Jeanna De Waal). This instantly sets up romantic possibilities for Orwell—whose wife, Eileen O’Shaunnessy, had died in 1945 (he remarried in 1949)—despite the nearly 20-year difference in their ages.
Caite Hevner’s gracefully simple set, showing a hotel room on one side and a neutral space on the other, beautifully lit by Stuart Duke, permits the action to spring back and forth instantaneously from various auditoria to the hotel; the dramatic structure even allows the public and private scenes to be conflated as the discourse blends between one place and the other. Amy Sutton’s stylish costumes help capture the 1940s ambience with just the right degree of flair.

The principal subject is Orwell’s Animal Farm. Faced by the anti-communist fervor of people attending his talks (voices shout out comments and questions from the audience), Orwell attempts to explain the difference between his own anti-communist—especially anti-Stalinist—socialism and the way in which most people at the time painted the purportedly benign idea of one with the evil brush of the other.
The highly educated Carlotta, who becomes a sort of minder to ensure that Orwell refrains from defending his leftist leanings, doesn’t offend his audiences, and tempers his more defiant responses, serves as a foil allowing him to explain himself more fully. It’s in the byplay between these sharply differing characters that the heart of the play lies, although the sexual subtext to their relationship does seem somewhat strained.

Over the course of the hour and 45-minute performance (with an unnecessary intermission), bits and pieces of Orwell’s biography—like his participation in the Spanish civil war and his concern for the poor—are dropped in, as are more contemporary references: Alger Hiss, Nixon, the Hollywood Ten. Clear as much of this will be to those aware of 1940s history, it’s likely to go over the heads of many younger viewers.
There’s an excellent scene, by the way, where, having ordered a box of groceries (delivered by a young man [Casey Predovic] in awe of the recipient), Orwell lays out the contents to describe the difference between what rationing meant to American citizens during the war (generous) and Brits (near-starvation level), who were still rationing years after the war ended and the practice had ended in the U.S.

The play is extremely well directed by Peter Hackett and superbly acted by Horton and De Waal. Horton, like Sutton and Hackett, teaches at Dartmouth (with which several on the tech staff are associated); he bears a distinct resemblance to Orwell (with a touch of the late Roger Rees thrown in), has a flawless British accent, and brings intelligence, charm, and complete honesty to every line. De Waal, a lovely blond who brings Rachel Evan Wood to mind, matches him line for line with nuanced readings, squeezing the subtle truth out of every utterance. Predovic, in his much smaller role, makes his few moments on stage count. 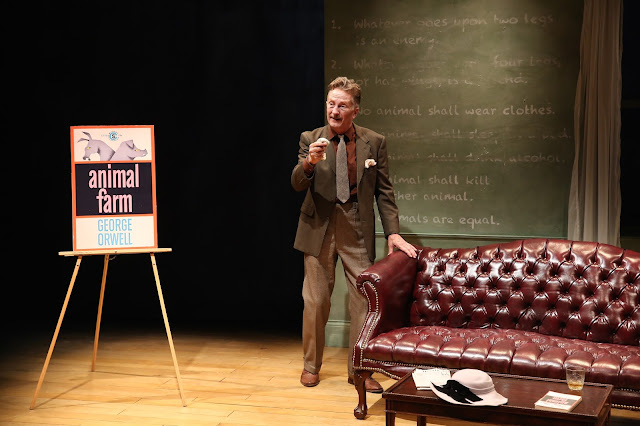 Orwell in America never actually reveals the fiction it’s based on, which is a bit discomfiting when one considers that some will take what it depicts as fact. That disclaimer aside, it makes for an engrossing experience of which it can be said that, if all plays were equal, some, like this one (despite its flaws), would be more equal than others.