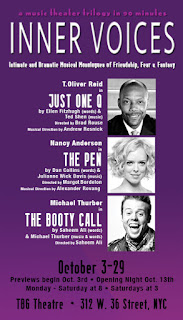 Hopefully, the half-filled house at the TBG Theatre when I saw the delightful new installment in the biannual Inner Voices series was an anomaly, even though there was no presidential debate keeping people home that night. Each program in the series—produced by Premieres under the artistic direction of Pauline Haupt—offers an evening of independent mini-musicals created for solo performers and accompanied by different musicians. Of the three programs I’ve seen over the years, this was, all around, by far the best. And, while each star gives a terrific performance, the one by Nancy Anderson in the middle piece, “The Pen,” is an absolute must-see for every musical theatre aficionado.
Unlike “The Pen” and “The Booty Call,” the show’s second and third pieces, which are monologues about a particular character’s own thoughts and behavior as they experience them, the opening work, “Just One Q,” directed by Brad Rouse, is a story about the past, narrated by a third party telling us about other people. Written by Ellen Fitzhugh and composed by Ted Shen, the story, set in 1961, is told to us by an African-American nursing home orderly named Bennie (T. Oliver Reid). He tells of two elderly women at the Broadbend Nursing Home in Arkansas, Bertha and Julynne, with a long history of mutual jealousy, who wrangled while playing Scrabble over things like which of them would be buried next to Mr. Greene Cotton, the man both loved (one was his wife, the other the woman he left her for), and who died when whacked in the head by a hot iron.

Benny, dressed in white shirt, pants, and shoes, with a little black bowtie, sings in the first person and as both old ladies, while jazz-like music is played upstage by an ensemble of bass (Mary Ann McSweeney), piano (music director Andrew Resnick), and reeds (Harry Hassell). Reid sings beautifully, has an open and engaging personality, uses a rich Arkansas accent, and makes the most of his not particularly memorable Southern Gothic material.
With “The Pen,” sensitively directed by Margot Bordelon, Nancy Anderson offers a truly awesome performance as Laura, a Milwaukee woman who, at first, seems like your average, neatly dressed professional (sensible heels, skirt, buttoned up white blouse, red sweater)—she’s an executive assistant—getting ready to leave for work. But before she can even open the door, she begins to double check her bag to make sure she’s got everything she needs. It’s something most of us have done before departing for the day, and watching her search for her keys, with an almost willful attempt to keep from being too stressed, seems amusing at first.
It gradually dawns on us, however, that there’s something a bit off about her behavior, and pretty soon, when she treats a purple pen she finds in her bag as if it might somehow be carrying something tantamount to the Zika virus, merely because she doesn’t remember it, we realize the depth of this woman’s OCD and germaphobia. Her manic spraying of disinfectant and her wiping clean everything she might touch as she fights to gain self-control so she can get to work on time reach psychologically frightening proportions. As she struggles she recounts details of her work life (as the “Coffee Bitch”) and personal life. The only drawback comes when we wonder how a woman so oppressed by her compulsions can get through all the other days the piece ignores.
The insightful lyrics by Dan Collins and semi-operatic music by Julianne Wick, performed by musical director and pianist Alexander Rovang and guitarist Tom Monkell, perfectly capture the many shifts in Laura’s emotional predicament, sometimes humorous, sometimes tragic. It’s hard to conceive of a finer realization of Laura than Anderson’s; with her delicate features and puppy dog eyes she creates an image of fear and trembling so vivid it could be used as a case study in psych classes. The convincing intensity of her acting (including a mastery of physical movement) is greatly heightened by the perfection of her soprano, demonstrating how powerful the elements of music and acting can be when perfectly balanced with one another. This is exceptional work, deserving of a wider audience.
Closing the program, after an intermission, is something quite different but also valuable as a demonstration of the effect of psychological hang-ups on even the most gifted and seemingly normal individuals. In “The Booty Call,” directed by Saheem Ali (who also contributed to the lyrics), Gabe is a versatile, 28-year-old musician-singer working on a demo in his bedroom cum well-equipped recording studio when a phone call from a girl named Sam, inviting him to come over for dinner and what comes naturally, becomes a potential distraction from the work at hand.
Gabe is in the terrifically virtuosic hands of Michael Thurber (music and lyrics), a friendly, likable guy dressed in basic grunge-wear uniform of socks, boxers, and t-shirt, who wrote the music. He actually seems to be composing it as he works out his recent sexual performance issues and comes to terms with what he’s seeking in a relationship. Demonstrating his multifaceted talent on a drum pad, keyboard, synthesizer, huge electric bass, and electric guitar, and using a looping mechanism to record background effects and multiple voices, Thurber performs in multiple genres, including hip hop, rock, and jazz, all of it greatly appealing.
The stage space remains open for each play, with designer Reid Thompson’s different arrangements of door and window frames supported by carefully selected scenic props (a table and chairs with a Scrabble set; a sink and stove with a few items of furniture; a bed and musical equipment). Oliver Wason’s lighting is consistently supportive, and M. Meriwether Snipes’s costumes never falter.

There are only a few performances left and every seat deserves to be filled. These are Inner Voices you’ll want to hear.