“Home Is Where the Heart Is” 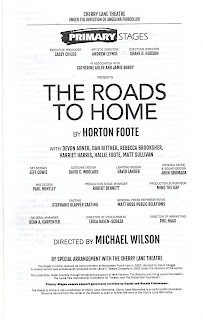 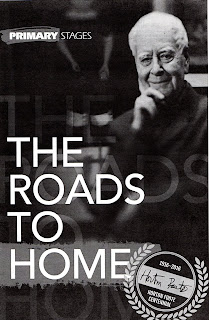 Harrison, Texas. Playwright Horton Foote’s (The Trip to Bountiful) fictional hometown—a stand-in for Wharton, Texas—mentioned with deep nostalgia in various plays, is the soul of The Roads to Home, now in a fine revival at the Cherry Lane, directed by Foote specialist Michael Wilson for Primary Stages; thankfully, Hoote’s foremost performer, his daughter, Hallie, is involved. For all the references to Harrison, however, both first act scenes are set in Houston and the sole second-act scene in Austin.
Like so many works by the prolific author, who died at 96 in 2012 (2016 is his centennial), it’s a chatty, thinly plotted, occasionally comic, but ultimately affecting domestic drama about average, not especially dramatic, people. First seen locally in a 1982 Off-Off Broadway production, it had its Off-Broadway premiere a decade later at the Lambs Theater. Hallie Foote, who played Annie, now portrays the middle-aged Mabel Votaugh (taken by Jean Stapleton in 1992).


The two-hour, 10-minute play’s three scenes were originally intended as loosely related one-acts: “Nightingale,” “The Dearest of Friends,” and “Spring Dance.” Each is preceded by the projection of these titles printed in silent-movie style. The Houston scenes take place in 1924, and the one in Austin four years later; the dialogue contains numerous details that bring the period to life. Only one of the characters from act one appears in act two, which gives the impression of being more of a “what ever happened to her?” sequel than as an organic continuation of what preceded it.

In scene one, we’re in the kitchen of Mabel Votaugh (Hallie Foote), where she’s visited by her next-door neighbor, Vonnie Hayhurst (Harriet Harris). Mabel and her incommunicative, railroad-worker husband, Jack (Devon Abner), have moved here from Harrison, while Vonnie and her spouse, Eddie (Matt Sullivan), have recently moved in from Monroe, Louisiana. The times are such that these neighbors simply walk in unannounced, without even knocking, or while still in nightclothes. Mabel and Vonnie are kind and well-meaning churchgoing ladies, but they’re not as personally content as their outward behavior might suggest.

Mabel and Vonnie, wearing loose-fitting housedresses, gossip—often amusingly—about trivialities, such as luncheons, parties, movie going, people’s church denominations, and scandals new and old, usually involving marital infidelity. As we’ll discover, they themselves are partners in stultifying marriages. Soon, Annie Gayle Long (Rebecca Brooksher), a young woman from Harrison, arrives by streetcar from across town, where she lives with her husband, Mr. Long (Dan Bittner), and their two kids.

Annie, who witnessed her father’s murder in her youth, is a lost soul; she keeps pointing her finger like a gun, saying “pop, pop, pop,” or bursts unexpectedly into song (“My Old Kentucky Home”). She’s been visiting Mabel frequently, finding in their mutual backgrounds in Harrison a grounding in the reality that keeps sliding out of reach. Mabel, too, must reach into her memories of Harrison to maintain stability. Vonnie, having heard so much of it, makes a trip there with Eddie, much to her regret, when it leads to Eddie’s decision to divorce her, the almost comical subject of the second scene.
The last scene abandons the Votaughs and Hayhursts to focus on Annie, confined for four years now to a state asylum in Austin. But this institution, in the days before drugs became the cure du jour for psychiatric problems, is the kind that offers patients a modicum of normal life, such as annual dances attended in formal attire. Annie wears a lovely yellow gown (the costumes are by David C. Woolard) and the three men who appear—two of them from Harrison—wear tuxes.
Everything looks perfectly normal until we realize that one, Dave Dushun (Dan Bittner), is practically catatonic, and the others have memories as slippery as ice. The quiet poignancy of the scene is heartrending, especially when the gabby Annie (a bit like a young Amanda Wingfield at a cotillion), now divorced and separated from her beloved children, and striving for normalcy, seeks to have one of her equally disturbed friends get in touch with her mother.
Hallie Foote’s sensitive, liltingly accented Mabel is absolutely lovely; you can practically touch the humanity of her concern for the neurotic Annie. Harriet Harris is perfectly cast as Vonnie, the aging belle whose marriage is cracking. Her comic desperation when she decides to call her husband’s mistress is priceless. Brooksher’s Annie is a moving study in psychological distress, especially luminous in act two, while the five male roles are each sensitively handled, four of them via doubling.
Jeff Cowie’s efficient set for the Votaugh home is very spare but uses a turntable to show both its kitchen and living room in consecutive scenes; his terrace garden for act two, which is more substantial, is atmospherically lit by David Lander. John Gromada’s original music and sound design help establish time and place.

Home may be where the heart is, but the effort to recapture it, if only in memory, is nothing short of heartbreaking in The Roads to Home.