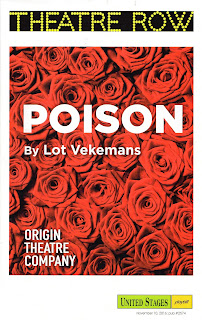 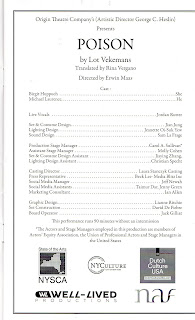 New York produces hundreds of plays each season in every style, from classic to avant-garde, but it remains utterly parochial when it comes to offering plays translated from the cream of the world’s current non-English-writing dramatists. The finest new English-language plays continue to be translated and produced outside the borders of their origin; it’s been too many decades, though, since America has seen the equivalent of Brecht, Anouilh, Giraudoux, or Pirandello, for example, names that used to appear regularly not only Off-Broadway but on the Main Stem itself.


A few years ago, a friend starting an independent theatre company asked me what niche her group might best serve. I suggested she focus on the finest recent foreign plays, works that surely deserved English-language stagings, and that might even already be receiving productions elsewhere outside the U.S. She chose to go in another direction but there's actually a local company trying to do something like what I proposed. It’s the Origin Theatre Company, which began in 2002, and whose artistic director, George C. Heslin, notes in the program for its newest production, Poison, by Dutch dramatist Lot Vekemans: “Origin has established itself as the gateway to North America for Europe’s most respected award-winning playwrights.”

That may be slightly misleading; thus far, Origin’s most significant contribution has been the annual 1st Irish Festival, established in 2008; those plays, however, were written in English, and are not especially unusual in a city that regularly produces new Irish plays. It’s plays from the non-English-speaking world I’m concerned about, plays like Jonas Hassen Khemiri’s Swedish drama, The Hundred We Are, directed for Origin earlier this year by Erwin Maas, or the world premiere of Rina Vergano’s translation of Poison, Origin’s newest work, also directed by Maas. I missed the Khemiri play. On the other hand, while I'm happy to have seen Poison, Vekemans's drama about the aftermath of a failed marriage, it proves disappointing. Is this really the best the European stage has to offer, even with choices restricted by budgetary concerns?
Poison’s résumé tells us of its distinguished place in the pantheon of plays from the Netherlands, of its various awards in Holland and its many international productions, including in Russia and China, with translations into a surprising number of languages, and with a Dutch film version scheduled for release in 2018 and an English movie in development. All of which seems much more impressive than the play itself, at least in this production, which reveals a sparingly-produced, Beckettian two-hander, performed at a funereal pace, with much of its dialogue spoken at just above whisper level, creating less tension than watching grass grow.

When the audience enters it sees designer Jian Jung’s minimalist set of white carpet, partial white wall, and white bench. Everything else is black, the only splash of color being a soda machine showing an illuminated sign of a generic soda can saying “Cold Drinks”; this prop, by the way, defies the script’s calling for a coffee machine as well as dialogue referring to its menu of “expresso, double expresso, cappuccino and latte.” When a character inserts a coin, a bottle of water drops loudly into place. I’d like to have seen the effect on that white carpet of a latte being thus delivered.

A tall, slender, somewhat scruffy man in his 40s is on stage as the audience files in, walking about in anticipation of something, and thereby hushing the usual preshow audience chatter. When the show begins he’s been there nearly half an hour, so if you go, there’s no need to take your seat until several minutes before curtain time. His waiting, which could have been communicated within a few seconds of the opening, does, however, establish a sense of foreboding.

The man is He (Michael Laurence). The woman he’s waiting for (Birgit Huppuch) is She. (Why playwrights insist on depersonalizing their characters with generic labels baffles me.) Within the cold abstraction of the setting, He and She behave naturalistically, generally speaking in a low-intensity, nearly affectless delivery suggesting their wariness, discomfort, and reserve in each other's company. The lack of furniture other than the upstage bench (the script calls for chairs) eventually forces them to sit on the floor, like youngsters, when conversing. The direction also includes beginning the play with the mournful, acapella singing of Richard Strauss’s German lieder, "Morgen," a translation of whose romantic lyrics is in the program.

The high-pitched voice comes from behind and above the audience where, if you can turn your head enough, you’ll see young countertenor Jordan Rutter, dressed entirely in black. At several points during the intermissionless, 90-minute play, scene transitions are indicated by his lugubrious singing as he walks dolefully down an aisle and across the rear of the stage.
Poison is about the meeting at a Dutch cemetery chapel of a man and a woman ten years after they broke up, an event precipitated by his inability to live with her incessant grief after the death of their child when hit by a car. The cemetery has presumably sent them letters asking them to come to discuss arrangements for the reinternment of their son because of poisoned ground waters beneath the graves. (Thus offering one reason for the title.) But, even after He, who has flown in from his new home in Normandy, France, and She meet again and very slowly struggle to reconnect, no one from the cemetery shows up.

Thus He and She are alone, forcing them to confront their broken past and come to terms with the death of their boy, which, we might say, poisoned their love. She, the more emotional and depressed of the two, is unable to accept his ability to rationalize their tragedy and move on with his life. He's a journalist and thus more objective. Guilt hangs heavy in the air. As the hours pass, not much else happens before we learn the reason for their being there (guessable midway through), and a rapprochement of sorts occurs.
Both Laurence and Huppuch are respected actors but--apart, perhaps, from a tearful breakthrough--their muted performances, flecked with innumerable Pinter-like pauses, kept me at arm's length. The stone-silent audience seemed to be absorbing the drama intently but it remained as cold for me as the image on the soda machine. Vekemans's play has received much acclaim elsewhere (and possibly will here, as well), thus making it another example of the adage that one man’s meat is another man’s poison.