“Tennis Is Not Life?” 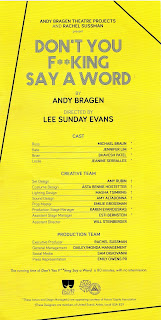 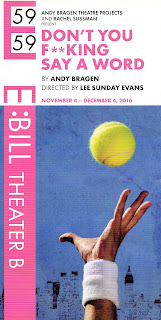 Andy Bragen’s Don’t You Fxxking Say a Word adds another to the growing list of play titles potentially unprintable in family newspapers; that, I’m afraid, is about the most controversial thing about it. It’s dressed up with some structurally clever tinsel, gets a briskly inventive staging from Lee Sunday Evans, and enjoys the presence of four expert actors, but what should be over in forty-five minutes takes about twice that long to bring the curtain down.

Bragen, satirizing the competitiveness of modern men, and also stressing the difficulty of finding midlife friendship, introduces two New York couples in their late thirties: Russ (Michael Braun) and Kate (Jennifer Lim) and Brian (Bhavesh Patel) and Leslie (Jeanine Serralles). Meeting up after not having seen each other since college, where there was something of a social divide between them, the women agree to get together again. Meanwhile, their unemployed husbands, both tennis addicts, become regular competitors, playing several early mornings a week at the outdoor courts near the FDR Drive in lower Manhattan.

What begins as a friendly rivalry between two more or less equally matched players becomes a ferocious competition for dominance--needed to compensate for other failings in their lives--and culminating in the oft-referred to “incident” that inspires the title and brings their matches to a rude conclusion. In case you think the playwright is implying that tennis is a metaphor for life, Leslie disabuses us: “Tennis is life, the bumpers stickers say. Bull shit. Tennis is not life any more than golf is, or football, or hockey or dog breeding or literature. Life is life. That’s all–nothing else.” I’m not so sure.
With their relationship on the line, the women attempt a reconciliation with a get-together over wine at Russ and Kate’s Williamsburg apartment but it just makes matters worse. This scene, the play’s best, is where we get to see their interactions in a way that makes the characters seem less as abstractions and more as real people. This is partly because of the distancing device until now of having the women narrate the story, Greek chorus-like, stepping into and out of the action.

The tennis-like repartee, lobbed back and forth in bite-size sentences, is also emotionally cool, an effect heightened by the neutrality of Amy Rubin’s set—a pale blue arrangement of walls and upstage bench, with white lines suggesting a tennis court. (Suspending the action so the actors can put a rug and furniture in place for the gathering seems unnecessary and distracting on a set otherwise capable of representing multiple locales without fuss.)
Evans stages the action smartly with choreographic precision, especially when the men play their matches with freeze-frame poses and pantomimic movement. Given the play’s narrow focus, however, and its inability to keep the comic volleys coming as regularly as they should, the conceit quickly grows stale. If you don’t follow or know much about tennis, just go with the flow and ignore the occasional jargon and scoring details. Just remember, love has a different meaning when it comes to tennis.