“Power to the Public” 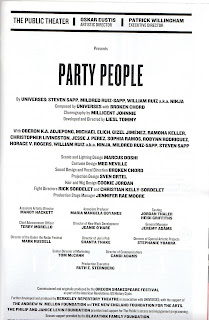 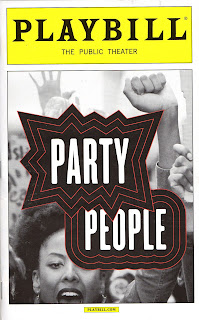 With the exciting, if seriously uneven, Party People, the Public Theatre once again demonstrates the sharpness of its cutting edge commitment to socially conscious theatre delivered with a powerful punch at the hands of explosively talented artists. Developed and directed by Liesl Tommy (Eclipsed) and Universes, a group of exceptionally talented message-bearing mummers (Steven Sapp, his wife, Mildred Ruiz-Sapp, and her brother, William Ruiz aka Ninja), this rousing musical of agitprop sturm und drang takes on the history of the political and personal struggles of the Black Panther Party and the Young Lords Party—both once nightmares to the average white American—with an uncanny timeliness.
It’s preaching to the choir, of course, and knows full well what buttons to press—like a crack at Donald Trump’s expense—to get the responses it seeks, but for all its freeform dramaturgy, stereotypical characters, and simplified conflicts, it has an infectious nonstop energy and point of view that you enjoy for its performative values while also discovering that it might influence your behavior, even if you’re not a Marxist-Maoist ideologue.

Based on numerous interviews with movement participants, Party People—commissioned by the Oregon Shakespeare Festival and later seen in Berkeley, so vital a part of the Panther movement—imagines a commemorative exhibition party being curated by two beret-wearing young men, the video artist/rapper Malik “Mk Ultra” (Christopher Livingston), and the progressive hip-hop artist and clown Jimmy “Primo” (William Ruiz a.k.a. Ninja,” his hair shaved in a Puerto Rican flag pattern). They intend to celebrate the history of the Panthers (founded 50 years ago) and the Young Lords, who sought justice for the black and Latino people they represented during the height of the Civil Rights disturbances of the 1960s.
During the two-act, two-hour show Malik, the son of a Panther serving a lifetime sentence, gathers together an assortment of former radicals—willing and reluctant—for his party. The action cuts quickly back and forth across time as it reveals the external and internal tensions that drove these activists and brought the powers-that-be down on them, particularly as exemplified by the FBI and Chicago police department’s brutal slaying of 21-year-old Panther Fred Hampton as he lay sleeping in his apartment. Meanwhile, tensions emerge between the young artists and the aging radicals they emulate.
The show interweaves today’s hot-button racial issues (like police brutality and Black Lives Matter) into its diffuse matrix of political concerns (which also encompass grievances related to the Vietnam War, the drug epidemic among people of color, LGBT activism, Puerto Rican independence, prison rights, and the anti-machismo empowerment of women); there are frequent references to controversial figures of the past, like Huey Newton, Hampton, Puerto Rican independence activist Pedro Campos, Bobby Seal, Che Guevara, and others. It’s a story of conflicting agendas, broken promises, traitorous infiltration and betrayal, official malfeasance, biting slogans, and bloody violence. And it sometimes threatens to come apart.
The unit setting, by Marcus Doshi, who also did the versatile lighting, contains at least a dozen TV screens filling the overhead space in every direction, and an upper level behind which glares the boldly electrified word Revolution!!! Voices are often loud, challenging, and argumentative; the music and lyrics (by Universes and Broken Chord), regardless of style (hip-hop, blues, chain gang, gospel, and salsa, including Spanish lyrics), is largely upbeat and pounding; and Millicent Johnnie’s energetic choreography bursts with fiery furor and insistent potency. Wearing spot-on period wigs and costumes (kudos to Cookie Jordan for the former, Meg Neville for the latter), many characters go back and forth between their youthful and present day personas.
While there are stretches of dialogue, most of the material is conveyed through songs and choreographed movement. An early musical sequence is a lengthy but remarkable tour-de-force reflecting the history of the revolutionary movement and its goals. The show’s overriding message is that people must commit themselves to a cause, that for there to be progress there must be sacrifices, and that we must all be revolutionaries and take action if change is to occur. I suspect a lot of people will be heeding this message in the days to come, regardless of what they think of Party People or even if they never see it.
Party People is defiantly one-sided, its only relatively balanced scene coming when the wife (Robynn Rodriguez) of a slain cop shows up at the party and defends her husband’s humanity in the face of Blue (Oberon K.A. AdjeIpong), who was acquitted of killing him, thereby inciting everyone’s anger against the “pigs” and at whoever invited this representative of “the enemy.” But we also see the enemies within, those whose actions harmed the movement, like Solias (Horace V. Rogers), who agreed to turn over information to an FBI agent (Michael Elich).
The show’s nebulous structure lacks the suspenseful momentum of what-comes-next dramaturgy so you may think you’ve seen it all after act one; believe me, you haven’t, because, even without conventional suspense, the intense performances hold you in a vise-like grip. That doesn’t entirely absolve the show of excess, since the points it makes get repetitious; the surprises come less in the plotting than in the adroit staging and dancing, the inventive verses and propulsive rhythms, and the ensemble’s uniformly memorable performances. There are too many to single out, but I must list, in addition to those already mentioned, Jesse J. Perez, Sophia Ramos, Ramona Keller, and Gizel Jiménez.
As Party People nears its end, it engages in a brief political debate before concluding with a brilliant, cuttingly ironic hip-hop number delivered by Jimmy and called “I’m an American,” backed by a chorus singing “Life, Homeland, Bread.” This song would not be music to our new leader's ears.
OTHER VIEWPOINTS:
Show-Score.com
Party People
The Public Theater
425 Lafayette St., NYC
Through December 11