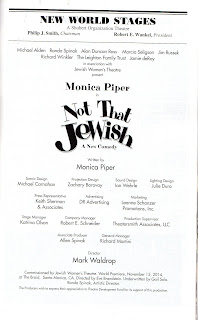 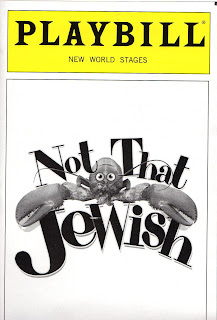 When I go to a show called Not That Jewish I expect to laugh a lot, which, in fact, I did at this engaging one-woman show by and starring Monica Piper. What I didn’t expect, though, was to find my heartstrings being plucked so tenderly that even the Zyrtec I swallowed that morning couldn’t keep my eyes and nose dry.


Piper’s show, which premiered in Santa Monica in 2014, is like an extended standup routine. This is only natural considering that she first made her mark doing standup. In some ways, it’s reminiscent of Billy Crystal’s great 700 Sundays, although not as great. Now in her mid-60s, she’s a trim, rubber-faced performer who delivers a mostly very funny, 90-minute account of her life growing up in the Bronx as the daughter of David Poss, a comedian whose show biz name was Roy Davis. In his act, called “vocal pantomime,” which Piper briefly demonstrates, he added physical comedy to the lip-synching of popular songs.
His influence on Piper, who changed her own name from May Lee Davis to Monica Piper when she saw the sign for the Santa Monica Pier, is evident in her every move and facial expression, in which my companion also saw the shadow of Robin Williams. Replete with all the gestural and facial shtick of a Borscht Belt tummler, Piper barrels through her life story growing up in her “Jewish but not very religious” household, and hearing from a childhood neighbor, Carol Bengelsdorf, that she “wasn’t that Jewish” because she didn’t attend Rosh Hashanah services.
She introduces her parents and closest relatives (changing her voice and manner for each), then takes us on a highlights tour of her life, including her two failed marriages to WASPS; her burgeoning career as a comedienne; her Emmy-winning (cue the statuette) stint as the head writer on “The Rugrats”; an encounter with her childhood idol, Mickey Mantle, who tried to hit on her; her mother’s Alzheimer’s; her dad’s passing; and, among other things, the results of a mammogram.
Most extensively, she recounts her adoption, in her early 40s, of a little boy, Jake, from a pregnant, 19-year-old, Christian woman from Tennessee, and of the moving aftermath of that experience when the boy grows up (and out of his green Mohawk hairdo) and reaches out to his birth mother. When Piper reads a letter from the Southern-accented woman, you’ll be reaching for your hankie. Schmaltzy? Of course. Effective? I’m writing about it, ain’t I?
Through it all, she finds the laughter beneath life’s ups and downs. Many of the jokes are Jewish-inflected and familiar to anyone who’s seen, let’s say, Jackie Mason’s routines. Every now and then, a word—deeds, acceptance, humor, compassion—floats by to spur the next sequence in the show. Despite its theme, the play is for everyone who has a Jewish heart, much as those old Levy’s Jewish rye bread ads used to imply; still, folks who laugh at Yiddishisms will soak up just a bit more of its ethnic gravy than everyone else. 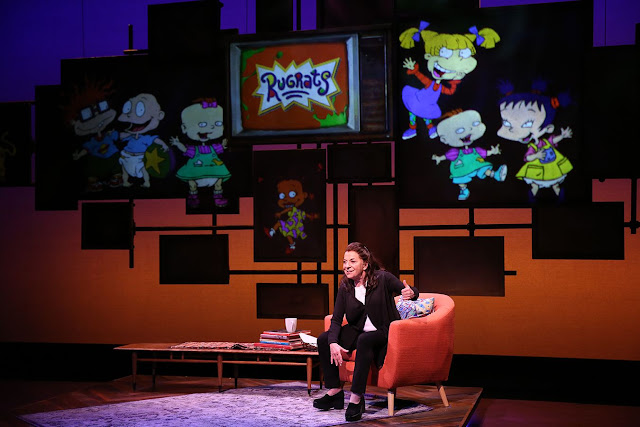 The show, at New World Stages, is performed on a set designed by Michael Carnahan (effectively lit by Julie Duro) that scatters several pieces of furniture across a living room rug. Upstage is a backdrop of irregularly sized, frame-like spaces on which various images designed by Zachary Borovay, many of photos from Piper’s life, are projected. The stage is too wide for so intimate a show, but director Mark Waldrop does his best to create visual interest by keeping Piper moving.

So go. You’ll laugh. You’ll cry. You may even feel that Jewish.