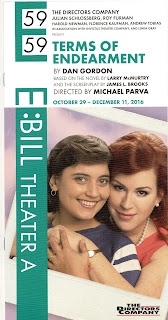 Dan Gordon’s stage adaptation for the Directors Company of the popular 1983 weepie and multi-Academy Award-winning Terms of Endearment (Best Picture) is, I hate to report, anything but endearing. That filmic tearjerker, with a script by James Brooks (Best Director/Best Adapted Screenplay) based on Larry McMurtry’s novel, succeeded both in garnering warmhearted laughter and emptying millions of tear ducts via the indelible performances of Shirley MacLaine (Best Actress) as the attractive Houston matriarch, Aurora Greenway; Deborah Winger (Nominee: Best Supporting Actress) as her long-suffering daughter, Emma; Jack Nicholson (Best Supporting Actor) as aging astronaut cum playboy, Garrett Breedlove; and Jeff Daniels as Emma’s unfaithful husband, Flap Horton.
Those actors, and a cast including Danny DeVito and John Lithgow (Nominee: Best Supporting Actor) in roles cut from the play, portrayed their roles as if born to them, a commendation that’s impossible to accord to their respective stage counterparts, Molly Ringwald, Hannah Dunne, Jed Brown, and Denver Milord. None rises above a decent stock performance, although Brown rises a bit higher by channeling some of Nicholson’s more outrageous traits while making them his own. Otherwise, the question arises regarding the idea of turning a terrific movie, with all the expansiveness that implies, into a claustrophobic stage play on a cramped stage: as they say, if it ain't broke don't fix it.

Gordon’s script is pared down for a simultaneous setting—designed by David L. Arsenault—showing several interiors, dominated at center by a bed with a Renoir miniature (Aurora’s prize possession) on the wall behind it (and distractingly askew throughout act one when I went). The few exteriors are played downstage on the apron. Hanging overhead is a gable-shaped Lucite structure that brings to mind the sign fronting every Lowe’s Home Improvement Store. With various characters eliminated, the play gets by with six actors, two of them (Jessica DiGiovanni and John C. Vennema) doubling in secondary roles.
Without the illuminating performances of MacLaine et al., the story seems unexceptional, even dull, with its tragic twist more manipulative than ever. Beginning, like the film, with a scene showing Aurora so worried about whether baby Emma is breathing in her crib that she wakes the baby up, the play moves forward to the eve of the 18-year-old Emma’s marriage to Flap Horton, a college English teacher, for whom the now widowed Aurora has little but contempt.

Time passes. Aurora, a smartly dressed (by designer Michael McDonald) and coiffed redhead (wigs by Amanda Miller), is selfish and exceedingly vain (she loudly rejects the idea of becoming a grandmother). As her constant meddling in Emma's life shows, however, she loves her daughter, who moves with Flap to Iowa, has several children, and continues to receive daily calls from Aurora. Extramarital dallying by both Flap and Emma lead to their marriage’s dissolution, while the long-celibate Aurora lets her guard down long enough get enmeshed in a bumpy romance with her famous astronaut neighbor, Garrett, a pot-bellied, boozing, dame-crazy, happy-go-lucky roué who usually prefers women half his age and is wary of any long-term commitment.

Then, three-quarters through, lightning strikes when Emma is diagnosed with cancer, and everyone has to come to terms both with her fatal disease and its impact on the family’s future. (The movie’s affecting scenes with Emma’s eldest son, Tommy, have been cut.) What up to now has been a straightforward, bittersweet dramedy of family, romance, and marital dysfunction shifts radically into the soapiest of soap operas with Emma propped up in her hospital bed waiting in her mother’s arms for the inevitable; as if the scene weren’t bathetic enough, a piano recording of “I’ll Be Seeing You” is heard in the background as the lights dim. What the film makes seem natural the play makes feel contrived.
We should have needed rubbers to slosh through the deluge this was intended to invoke; instead there were a few isolated sniffles the night I went and, I’m afraid, only polite applause (no standing o’s) to salute the curtain calls.
A pallor of superficiality pervades Michael Parva’s heavy-handed production, in which the disparate performances still hadn’t jelled at the preview I saw. During act one’s scene shifts (but, for some reason, not during act two’s), sound designer Quentin Chiapetta underlines thematic ideas by playing popular standards (like “Anything Goes,” “In My Solitude,”  “Come Fly Away,” and “Don’t Go to Strangers”). There’s also too much over-obvious comic shtick, as when Garrett and Aurora stand facing upstage and you just know he’s going to grab her behind (and she his). Or when man-of-the-world Garrett lies in bed briefly practicing the moves he’s going to make on Aurora.
Ringwald, who can be a delightful stage presence (as per her turn as Sally Bowles in Cabaret) is simply out of her element here. She looks great but lacks that unique inner spark of eccentric lovability MacLaine brought to the role, playing only the externals and struggling to connect to Aurora’s psychological reality. Dunne, in grungy clothes, is charmless and uncharismatic, failing to break our hearts. Milord adds nothing special to Flap, but Brown’s Garrett provides flashes of the spontaneity that made Nicholson so great.
Gordon’s adaptation debuted at England’s York Theater Royal, toured the UK, and subsequently was seen in multiple productions in Europe and the Middle East. I can’t vouch for those productions but, for this one, I’m at a loss in trying to provide my own terms of endearment.