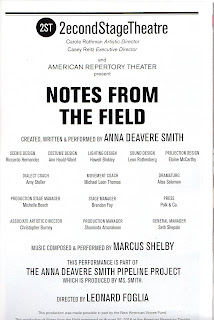 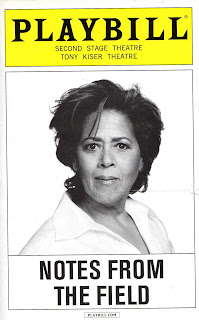 The dazzling Anna Deavere Smith is back on a New York stage in Notes from the Field, an often searingly pertinent inquiry into American racial problems, now Off Broadway at Second Stage. Onstage, accompanying her, is the marvelous composer/bassist, Marcus Shelby, but this powerful docudrama is essentially a one-person play. Shelby now and then quietly responds to something Smith says (I wish he didn’t) but for two hours and ten minutes, broken with a 15-minute intermission, she’s what you focus on.
Her job: assuming the personalities, emotions, and speech patterns of 17 people, men, women, kids, and adults, each one sharply different from the other. So vividly does she bring them to life that, in a sense, Shelby’s accompanying a 17-person play.
Although Smith’s best-known previous works in this vein, Fires in the Mirror: Crown Heights, Brooklyn and Other Identities (1992) and Twilight: Los Angeles, 1992 (1994), were about race, she’s also created shows on other national issues. In the timely Notes from the Field, however, which premiered at Cambridge’s American Repertory Theater in August, minority oppression is again her target, especially problems related to education, incarceration, and police brutality among black Americans, but also touching concerns of Native Americans.


As usual, all the dialogue is based on taped interviews and conversations Smith had with the people she’s representing. And, though only the voice of the interviewee is heard in each scene, the effect can be quietly devastating. Smith lets her people speak without interjecting her own perspective, which becomes clear enough in the accumulation of evidence these witnesses bring to the table.

As meticulously directed by Leonard Foglia, Smith performs on a neutral set, designed by Riccardo Hernandez, using only a few select props (a chair, a couch). Behind her is a series of vertical panels that can be raised and lowered or, like blinds, their angles changed. On them are projected videos (by Elaine McCarthy), many showing charged incidents that went viral after being recorded on smart phones, such as the Freddie Gray arrest, the forcible removal of a girl from her classroom, and the mistreatment by a cop of a teenage girl in a bathing suit. Printed projections provide important information, including each speaker's identification.

Howard Binkley’s lighting and Leon Rothenberg’s sound design contribute mightily, as do the simple costume elements selected by Ann Hould-Ward to provide just enough differentiation to set one person apart from the other. Smith never alters her hair style; sometimes she wears shoes or boots, other times she's barefoot.
Following a prologue spoken in the person of Sherrilyn Ifill, president of the NAACP Legal Defense and Educational Fund, there are four sections in Act One, “The Death of Freddie Gray,” “Fist Fighting,” “Compassion,” and “The Shakara Story,” while Act Two offers three more sections, the first untitled and the others called “Trauma” and “Never Give Up.”

Among the people we meet are the deli worker who videotaped the arrest of Freddie Gray in Baltimore, the fiery pastor of Baltimore’s Empowerment Temple AME Church, a mayoral candidate in Stockton, CA, a Yurok Tribal Court Judge, a parent in Stockton, a Philadelphia high school principal, a high school student in Columbia, SC, a prison inmate in Maryland, an emotional support teacher in Philadelphia, an artist/activist in Columbia, SC, and a famous congressman. Over 250 people were interviewed before these were chosen, but not all are equally gripping. They’re also definitely one-sided despite their varying opinions; alternative voices, like those of the police, are not represented.

Unlike Fires in the Mirror and Twilight, each of which focused on reactions to a very specific event, Notes from the Field, as its title suggests, is more wide-ranging; while it makes many important points about a poor educational system creating a spiral leading to incarceration, its broader focus tends to weaken the overall impact.

The closing scene, featuring Congressman John Lewis, begins softly and builds to a moving climax, and is immediately followed by a vigorous standing ovation. It was a good choice with which to conclude but—not that it matters so much—I wondered if the overwhelmingly affectionate response was a largely white, liberal audience’s reaction to the numerous grievances to which it had been listening or to the mind-blowing genius of Smith’s performance.

Regardless, you owe it to yourself to visit Notes from the Field. Because of the filtering process of Smith’s chameleonic artistry, it clarifies the racial issues roiling our nation more potently even than seeing her characters in person. At this moment, with the alt-right barking at the door of a new presidency, you cannot leave the theatre without a desire to do something positive about helping to trump hate with love.