“The Minute She Walked on the Stage” 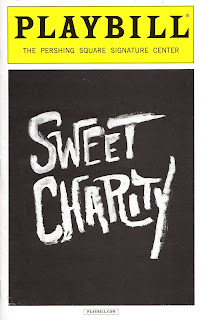 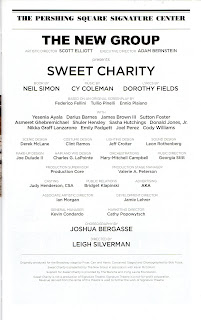 When the New Group's production of New York's fourth revival (the first Off-Broadway) of the 1966 musical comedy Sweet Charity ended on Saturday night, the audience rose to its feet in a show of affection for the show and its star, Sutton Foster. The 41-year-old singer-dancer-actress’s ascension into the pantheon of musical theatre sweethearts was immediately obvious from the warm reception she received on her entrance as Charity Hope Valentine.


The eponymous Charity, of course, is the perky but emotionally aching taxi dancer who’s onstage almost the entire show; she was created for Broadway by the great dancer Gwen Verdon and played by Shirley MacLaine in the 1969 film. (This, along with Terms of Endearment, is the second show in the last few days featuring a major MacLaine film character.) Although the smart but foolish Charity perpetually struggles to find a man to love and marry, always to be disappointed, the audience has no trouble falling for Foster, even in a production that, for all its occasional highlights, has a few problems.

Sweet Charity is a somewhat denatured adaptation (by book writer Neil Simon) of Federico Fellini’s film Nights of Cabiria (co-written with Tullio Pinelli and Ennio Flaiano), whose Roman prostitutes have been changed to New York dance hall hostesses. (The waif-like Giulietta Masina played the Charity role in Fellini's movie.) It benefits, of course, from a first-rate score (not entirely approved of by 1966's critics) by Cy Coleman (music) and Dorothy Fields (lyrics) that birthed a healthy number of jukebox favorites.
We first meet Charity, the heart-of-gold hostess at the Fan-Dango Ballroom, when she’s dumped in a Central Park fountain by her beau du jour, who runs off with her purse, while her plight is ignored by the gathering crowd. The scene shifts to the dance hall where Charity’s sexy fellow hostesses sing and dance to the jazzy “Big Spender.” ("The minute you walked in the joint . . . ")
The plot soon couples her with an Italian movie star cum Lothario, Vittorio Vidal (Joel Perez) after he’s dumped by his glamorous, equally foreign-accented date, Ursula (Nikka Graff Lanzarone). Charity’s totally into bedding the Latin lover but he’s preoccupied with Ursula, who, all contrition, arrives shortly after Charity dances about his apartment with a top hat and cane (“If My Friends Could See Me Now”). Charity hides in the closet while she comically spies on the lovers’ lovemaking.

During this scene, Foster hits a sequence of hilarious buttons showing off her Chaplinesque slapstick skills as she does one comic bit after the other (most borrowed from the original, like hiding her cigarette smoke by blowing it into a zippered clothes bag) while hiding amidst the garments hanging on a rack.
Charity’s next romantic encounter is with nerdy accountant Oscar (Shuler Hensley), with whom she’s stuck in an elevator while seeking to attend a lecture at the 92nd Street Y. His claustrophobia gets laughs and leads to Oscar and Charity’s beginning a relationship. Not long after, they’re stranded in midair on the Coney Island Ferris Wheel, the laughs now stemming from Charity’s acrophobia.
Charity lies about her profession but Oscar already knows the truth and says he’ll marry her anyway. After she’s quit the dance hall and they’re on the brink of nuptials, he bows out because he has a hang-up about purity, and can’t bear the thought of all her past affairs. The largely upbeat show takes a swift shift toward darkness, leaving Charity alone once more, singing the heart-tugging lament, “Where Am I Going?” This has to be the biggest downer in musical comedy history and one with which every Charity has had to contend.
This hit song was originally sung earlier as the show's 11 o'clock number but it's now been moved to the end. Interestingly, Verdon, a fairly weak singer, used to cut the song herself when she was tired.

It may have been financially smart but Leigh Silverman’s decision to borrow the shaved-down musical style of director John Doyle (The Color Purple) isn’t necessarily the wisest artistically. The problem’s not the reduction of the company from the 30 or so of the original to a mere dozen, requiring lots of doubling (which even the large-cast original required) and minor role eliminations.

It’s the undernourished visual appeal created by the abandonment of conventional scenery in favor of a large, open, wood-floored stage (designed by Derek McLane) surrounded by the audience on three sides. Upstage is a brick wall with half-a-dozen openings, on top of which the six-piece orchestra, led by Georgia Stitt, is placed. A selective number of stage props help, but the scene-setting burden falls heavily on the creative conjurations of lighting designer Jeff Croiter.

Some of the usually adept Clint Ramos’s costumes are more disappointing. Charity, for example, wears, almost throughout, an uninteresting outfit of pale mauve minidress (sometimes accented with a jeans jacket) with white piping and white go-go boots that looks more Carnaby Street than Times Square sleaze (remember Gwen Verdon’s iconic, short, black dress on the original album cover and program?). Charity's new uniform, coupled with a questionable blonde wig, makes Sutton seem more like the girl next door than the disillusioned sex worker who’s been around the block a few too many times.
Other costume problems include the hostesses’ dancehall clothes, usually an array of sharply differentiated hooker duds, but here uniformly two-piece, red-sequined, chorus girl attire, as if the show were 42nd Street.

What principally made Sweet Charity a 608-performance hit in 1966 were its luminous star (the same age then as Sutton is now) and the incredible Bob Fosse choreography (a good idea of which is preserved in the movie, which he also directed), an Everest every subsequent choreographer would, unenviably, have to climb. Joshua Bergasse’s numbers are satisfactory but unexceptional, including “Big Spender,” which only mildly evokes the master’s down and dirty moves while omitting the famous lineup of dead-eyed taxi dancers surveying the evening’s clients as they strike come-hither poses over the ballroom’s railing.

Sweet Charity's depiction of women as sex objects and as weak vessels incapable of maintaining their self-respect in the face of male rejection may not please avowed feminists. Even when you accept the time of its writing, you might get a shiver from Helene, Nickie, and Charity's song, "There's Gotta Be Something Better Than This," in which their dreams go no higher than being secretaries or hat check girls.

Foster receives capable support from Asmeret Ghebremichael and Emily Padget as her dancehall pals, Nickie and Helene. Joel Perez does very nicely in four distinct roles with varying accents, and the always welcome Shuler Hensley squeezes the square Oscar for every laugh he’s worth, while also displaying a fine baritone.

But it’s Foster many will be coming to see and the minute she walks on the stage you can tell that she’s a gal of distinction, a real big talent.