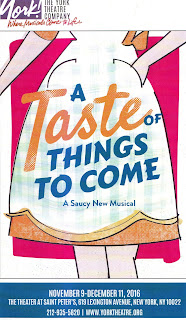 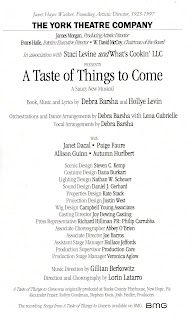 The York Theatre Company (enjoying its beautiful new seating) is serving up a scrumptious soufflé of a feminist-themed musical that should have some audience members returning for seconds. It’s called A Taste of Things to Come, has a high-calory book, lyrics, and music by Debra Barsha and Hollye Levin, touches lightheartedly on many women’s issues, and arrives after its world premiere earlier this year at Pennsylvania’s Bucks County Playhouse. Allison Guinn, one of the four original cast members, is deliciously in tow.


Its two acts are set, respectively, in 1957 and 1967, but, like almost anything you’ll see on today’s post-election stages, will zing you with ironic reminders of what just happened in America. A line that got me was when someone noted in 1967 that one day a woman would be president: Ooh! Just writing that brings me to a boil. Anyway, I’m getting ahead of myself.

The show first takes us to 1957 and the aqua-colored, checkerboard floor, formica- and chrome-adorned, Winetka, Illinois, kitchen of Joan Smith (Paige Faure). Steven C. Kemp’s bright setting (brightly lit by Nathan W. Scheuer), which doesn’t forget a starburst clock, has a rear wall featuring period ads and includes a cooking island made up of movable sections that play a big part in one of the standout dance numbers.
Joan and her three close friends—Agnes Crookshank (Janet Dacal), Dottie O’Farrell (Allison Guinn), and Connie Olsen (Autumn Herbert)—ranging from 23 to 25, have gathered for their Wednesday Winetka Women’s Cooking Club get-together. Agnes, single, is a sexpot in kerchief and curlers (she later lets her raven tresses free); Dottie, married and stuck at home with four kids, is plain, wears glasses, and is, shall we say, pleasingly plump; Connie is the blonde, all-American type but with a ready-to-pop bun in her oven that may not come out as pale as she and her husband; and Joan is the organizer-in-chief (should that be chef?) whose real name, we’ll discover, suggests she’d be comfortable making gefilte fish and latkes.
Joan wants the club to concoct a dish to enter in a new Betty Crocker contest, which gives act one its essential action, but the script is really more concerned with satirically referencing the conventional issues women presumably talked with each other about in the late Eisenhower years. What gets across is the cumulative impact more than any single topic. In dialogue and song they cover cooking, Dear Abby's column, gossiping, women’s roles as housewives vs. outside jobs, dieting, pills for every need, breast feeding (at a time when the word “breast” wasn’t to be spoken in polite company), Joe Bonomo’s advice pamphlets, Rock Hudson (before he was outed), Dr. Spock, sex and the Kinsey Report, the absence of food labeling, how World War II’s end hurt women’s place in the job market, and so on.
These nostalgic reminders of the days some deluded people think was when America was “greater” than now are embedded in fast-paced, quip-packed dialogue and high-fructose pastiche songs written in various pop genres—like rock and roll and calypso—of the 50s. Highlights include clips showing old TV commercials, including one with a nasty husband scolding his wife for her lousy coffee that would have today’s women marching in the streets. Dana Burkart’s colorful, picture-perfect costumes help recreate the era with panache, continuing to do so in act two, set ten years later, in 1967.

That year is reunion time at the Smith kitchen, where we see how radically the fashions have changed during the Swinging 60s and discover as well the shifts in everybody’s lives and life styles. The remarkable social changes of the day, along with the groovy slang, are amusingly contrasted with those of the previous decade. Vietnam has its role (Dottie’s son is serving), of course, as does Women’s Lib (bra burning? Natch).  A lively booty-shaking number called “The Whomp” celebrates being a woman, with lyrics like:

YEAH WHO PUT THE WHOMP
IN THE WHOMP BOMPA LOO BOMP BOMP?
YOU KNOW IT’S A WOMAN!

You can also anticipate a clichéd pot-smoking scene, with an initially reluctant participant—chubby Dottie—enjoying a toke, turning on (after first saying “I’m not feeling anything”), getting the munchies, and singing a hilarious paean to “Food.” Dottie, seeing the progressive behavior and lifestyles of her old pals—Joan’s an advice columnist, Connie’s a hippie living in Trinidad, and Agnes is a glamorous soap star—also has a strong number, "Just a Mom," in which she defends her everyday life as a stay-at-home mother.
There’s really nothing here we haven’t seen before, of course, including in time-jumping, all-female shows like the nonmusical Vanities and musical The Marvelous Wonderettes. A Taste of Things to Come has a lot of the same nostalgic shtick that made those sentimental, throwback shows digestible. The inventively bouncy and comic staging and choreography of Lorin Latarro takes familiar material and makes it enjoyably fresh, the way a good cook does in creating a flavorsome new recipe. Everyone sings, cavorts, dances, and does everything else well, so it's hard to pick favorites. If last year’s York discovery, Cagney, was able to snare a commercial run, might not that be a taste of things to come?

A Taste of Things to Come
The Theater at St. Peter's/The York Theatre Company
619 Lexington Ave., NYC
Through December 11