“All the King’s Horses” 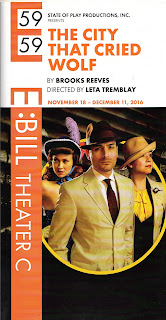 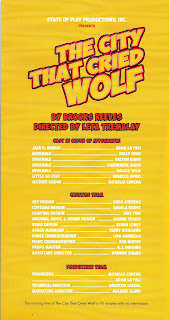 It was a cold night in the sleepless city. New York. Not Seattle. Icy blasts of mid-November wind chilled me as I left the Lex and hit the pavement. The thump of “Trump, Trump” was pounding in my head as I crossed Park on my way down 59th Street. Needing to numb the pain with a straight shot of theatre the way a junkie needs a needle in his vein, I pushed open the shiny steel doors of 59E59, picked up my tickets, climbed three flights, and found my seat in the tiny venue. There it was, a sheet of paper taped to it shouting out my name.


A redheaded old dame in the next seat asked why it was reserved. “Press,” I said. “I’m impressed,” she replied. “No, press,” I repeated. I checked her out; large chest, larger hips, around 65. A bad dye job on a balding scalp. Too young for me anyway. I turned to look for my buddy.

He trundled in just then, his tongue so dry you could light a match on it. I knew the drill and poured him a couple of Tic Tacs. He downed them, like St. Paul in the desert. “Lifesavers,” he finally said. “No, Tic Tacs,” I shot back. The lights dimmed and grainy film flickered on a screen.

Black and white titles flashed and bluesy music played. It was a film noir from the 40s, but I rubbed my eyes when the familiarly unfamiliar names appeared. No Bogart, Mitchum, or Powell; no Crawford, Bacall, or Stanwyck. Instead: Jack B. Nimble, Bo Peep, Humpy Dumpty, and Mother Goose. The movie stopped and live drama took over. There was a guy in a cheap beige suit, a fedora, and a five o’clock shadow that looked more like seven. He stepped forward, speaking in a husky monotone:

It was not a happily ever after day. It was dark. The place children glimpsed between their dreams. . . . Citizens locked their doors. Wolves roamed the streets. It was a dangerous city. My city. They called it Rhyme Town. The name’s Jack. Jack B. Nimble, private eye, and this is my story . . .

And thus began Brooks Reeve’s parody, The City That Cried Wolf, in which familiar noir tropes get another poke, this time from Bo Peep’s crook as well as tough guys’ rods. The City That Cried Wolf joins such recent noirish takeoffs as the one-acts “Queen” and “The Dark Clothes of Night” (both on a 59E59 bill) and Kill Me Like You Mean It downtown. Its angle is to set the action in a dreamland of fast-talking, cynical, nursery rhyme characters, and to pummel the material for every play on well-known words it can.

For a time, Reeves does a good job of keeping this comic ball inflated, coming up with a substantial number of zingers. When the leading man, a private eye named Jack B. Nimble, exits a speakeasy, he says, gruffly: “Outside it was raining. It was pouring. Old men were snoring.” When he’s asked why he was hired by someone, he deadpans: “His wife. He wanted her tailed because he was getting some.” “Some what?” he’s asked. “Tail,” he replies. Too many of the jokes barely raise a smile, though, much less a laugh. But eventually, the air in the ball starts leaking.
The plot, as convoluted as any noir classic, winds itself around the death—was it an accident or murder?—of local councilman Humpty Dumpty (Dalles Wilie), a rotten egg who falls to his splashy death from an apartment window. This, of course, inspires countless jokes (yokes, in the play’s vernacular). Meanwhile, the town is going to the wolves; those loudly baying, troublemaking have-nots, who are being falsely accused of blowing the town’s buildings down. The wolves are victims of Rhyme City discrimination (a “No Wolves Allowed” sign at the speakeasy and an anti-predator law being passed against them), indicating that Reeves has various issues on his mind, if you care enough to look for them.
Nimble, a private eye, is a former detective forced to turn in his badge two years before when Jill, his partner, fell down a hill. Goose (Michelle Concha), the female police chief, offers him back his job if he can solve the Dumpty case. A prime suspect is the bonnet-wearing, speakeasy singer, Little Bo Peep (Rebecca Spiro), a flame-tressed, femme fatale, who speaks softly but carries a big crook.
Mixed up in the maze is an array of over 30 characters whose more recognizable names include Muffet, Hansel, Gretel, Goldilocks, Jill, King Cole, Chicken Little, and the brothers Grimm (Wilhelm and Jacob), the latter a pair of dumbell gumshoes. Numerous costume and wig changes (Angela Borst is the adroit costume designer) are made by a versatile, occasionally cross-dressing crew consisting of Gwenevere Sisco, Dalton Davis, Holly Chou, and the aforementioned Wylie.
Greg Stevens’s unit set is a cleverly adaptable hodgepodge with slatted upstage doors that works for the various locales, especially as lit by Jake Fine, with many video projections by Kevan Loney. The atmosphere is suitably enhanced by Jeanne Travis’s music and sound design.
The City That Cried Wolf is the kind of thing--if not quite as professional--that you might see produced by talented theatre students as an end of the school year production, or even as an extended SNL sketch. But, for all its clever wordplay, and its never-crack-a-smile-because-you’re-funny performances (all the leads are spot-on), it’s still a spoof of an over-spoofed genre. Lita Tremblay’s staging is inventively cute and the dance sequences choreographed by Lina Sarrello are fun but it would need all the king's horses to make this work for an hour, much less 90 intermissionless minutes.