“The Stars at Night Are Big and Bright” 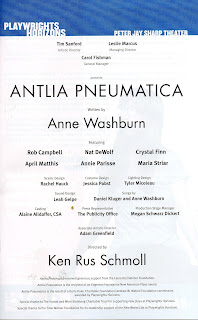 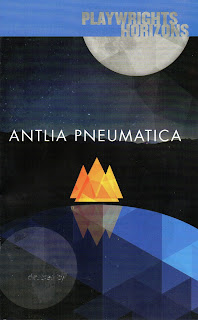 An Off-Broadway play has opened in which a group of people, mainly women, have gathered in the kitchen of someone’s home to commemorate the death of a man they all knew well. Clustered together on a mostly bare stage, they chatter about various memories of the deceased and one another and discuss how they might best dispose of the dear departed’s ashes. Meanwhile, they prepare a meal before our eyes, using real ingredients. The play, though, isn’t Richard Nelson’s wonderful The Gabriels: Election Year in the Life of One Family: Hungry, which just closed at the Public, and in which everything just enumerated takes place. Instead, it’s Anne Washburn’s Antlia Pneumatica, a somewhat less wonderful drama, which also brings to mind The Big Chill, at Playwrights Horizons.


Of course, in addition to being essentially plotless, the plays share only these key points and go off in different directions, stylistically and content-wise. Nelson’s intention is to capture a moment in time as an American family in Rhinebeck, New York, comes to grips with their place in the current of events during this fractious political year; two more plays are slated to follow up as the presidential election nears.

Washburn’s play, although many of its conversations are similarly naturalistic and mundane and even banal, is much less specific about its characters, their pasts, and their relationships, all of which you have to glean from the few hints provided; she’s more concerned with surreal atmospherics, including the infusion of poetry and songs (by Daniel Kluger and Washburn), amidst a fabric of thematic threads—most of them merely glanced at—including parenting, friendship, childhood and maturity, love and loss, marriage and divorce, the vagaries of memory, the illusion or reality of time, mortality and death, and the presence of ghosts. Washburn's a very smart writer (as witness her Mr. Burns: A Post-Electric Play) and some will appreciate her unique voice here; others, like the three people who walked out the night I went, not so much.
The place is the kitchen of a vacation home/ranch in the Texas Hill Country belonging to Nina (Annie Parisse) and Liz (April Matthis), sisters whose late dad--hints only, again--appears to have been a country western star. Nina is white and Liz is black, but, in the play’s matter-of-fact way, no mention is made of race so it takes time before you become aware they’re sisters. Of course, there are various explanations possible for this disparity, but, since none are offered, it comes off as a red herring; if there's a point it isn't sharp enough.

Also present is a friend, Ula (Maria Striar); others are scheduled to arrive but the only ones who do before the sluggish, intermissionless hour and 45 minutes are up are Nina’s moody ex-husband, Adrian (Rob Campbell, wonderfully mysterious), whom she hasn’t seen in 16 years; a seemingly gay friend called Len (Nat DeWolfe); and, shortly before the end, a boisterous Southern belle named Bama (Crystal Finn, a bolt of light in a dark play), whose presence leads to the supernaturally-tinted big reveal (which you may already have guessed). There are also Nina’s kids, whom we hear but never see (as opposed to what we’ve always been told about children), Casey (Skylar Dunn) seven, and Wally (Azhy Robertson), five. Their amplified, precocious voices—sometimes by themselves and sometimes with adults—are heard during several offstage scenes.
Washburn is urging us to listen to as much as see her play, so these offstage scenes are integral to her method. However, listening to them go on at length with the stage darkened can be like feeding the audience Ambien, which is also likely to be the effect of an overly extended, poetically ponderous scene between Adrian and Nina as they talk softly in the gloom, practically invisible against the starry night. It’s during this scene, by the way, that Adrian tells Nina (and us) that Antlia Pneumatica is the name of a constellation meaning “air pump.”
Washburn plays with our perceptions of reality as her script slowly ambles, or, I should say, rambles, along, offering behavior that's sometimes conventionally realistic (like the food being prepared) and sometimes magically realistic. This being a play in which things are not always what they seem to be, the situation, for all its seeming ordinariness, makes it hard to become fully engaged with these shadowy characters. And, you may ask, since they appear not to have seen each other in many years, why have these people flown and driven across the country to assemble in rural Texas for the funeral of someone with whom they’ve been out of touch for decades, and whose once strong place in their lives no longer exists?

There are pleasures to be derived from director Ken Ross Schmoll’s moody staging, Rachel Hauck’s spare set of a kitchen island, wooden beams, and hanging shrubs, Tyler Micoleau’s sensitive lighting, Leah Gelpe's sound design, the fine ensemble, and the only occasionally engrossing talk. However, Antlia Pneumatica could stand to have some dramatic air pumped into it.