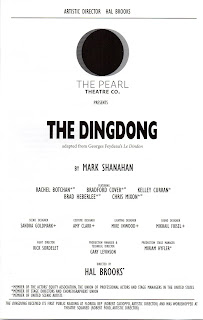 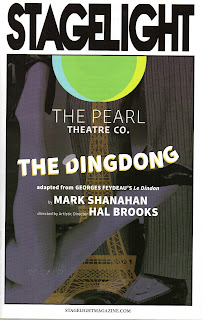 The Pearl Theatre, whose production of Stupid Fucking Bird is still running, is taking advantage of its capacious stage to present Mark Shanahan’s potentially hilarious adaption of George Feydeau’s 1907 The Dingdong (Le Dindon). I say “potentially” because it's impossible not to see the original’s many amusing possibilities being squashed by actors acting as if they’re funnier than they really are.
Shanahan has reworked one of Feydeau’s masterpieces (known in other versions as An Absolute Turkey and Sauce the Goose), so that it captures its madcap zaniness while condensing its running time to two hours, updating it to 1938, introducing a telephone, eliminating a number of characters, and imaginatively arranging things so that it can be done by a cast of five—using quick changes—to play multiple roles; annoyingly, the program doesn’t list who plays what. The program also credits Shanahan as the author in BOLD CAPS, while the original playwright, who doesn’t even get a bio, is mentioned thusly: “adapted from George Feydeau’s Le Dindon.”
In fairness to Feydeau (1862-1921), whose work is described in Pearl dramaturg Kate Farrington's "Insider" notes, it should be said that he was the avowed master of the French bedroom farce, which he polished to well-made perfection in belle époque Paris. In plays like A Flea in Her Ear (La Puce à l’oreille, 1907), Hotel Paradiso (L’Hôtel du libre-échange, 1904), and The Dingdong he made hysterical mincemeat of marital and extramarital sexual misunderstandings, using clockwork constructions to create bullet-paced, hilariously confusing situations in which disguises, mistaken identities, illicit lovers’ assignations, startling coincidences, jealous wives, compromising situations, slamming doors, hiding places, humorous disabilities, hotel rooms, and mistimed technical devices conspire in a cacophony of comical catastrophes.
Most of this is preserved in The Dingdong, although Shanahan’s dialogue is largely new. The play, even as streamlined, remains faithful to Feydeau’s intentions: Bradford Cover plays Pontegnac, a married Lothario seeking to bed Lucy Vatelin (Rachel Botchan), pretty wife of the Parisian lawyer Vatelin (Chris Mixon, the only actor with just one part). Cover is also Soldignac, a Hungarian businessman and boxing expert, and a hick doctor named Pinchard, visiting Paris with his near-deaf, flatulent wife (Botchan) to see the opera. Brad Heberlee takes the role of Redillon, a mustachioed dandy who also lusts for Lucy; in addition, he plays a virginal young hotel bellboy and a French policeman with an Inspector Clouseau accent. Finally, guest artist Kelley Curran covers Pontegnac’s fashionable Roz Russel-like wife; the Anna Magnani-like Italian sexpot Fabiola, who once had a fling with Vatelin; the Judy Holliday-like New York babe Mandy, who runs around in her silken undies; and a sexy French maid of the long-stemmed, short-skirted variety.

The action begins in Vatelin’s apartment where the plot’s big setup is sparked by Lucy’s declaration that she’ll have an affair only if it can be proved that her dingdong of a husband, Vatelin, cheated on her first. Act two takes us to a hotel room where all the principals manage to end up, with every possible sort of marital and sexual mix-up. There’s even a nutty buzzer system Pontegnac invents to signal for Lucy’s benefit when her husband and his presumed girlfriend are in bed together; of course, the plan goes crazily awry. By the end, despite all the imminent French naughtiness, everything is happily resolved, the institution of marriage, though shaky, is still intact, and, as the closing scene with Redillon and the maid insists, sex still reigns triumphant. Vive l’amour!
The play's inherent funniness is stomped on by Brooks’s heavy-handed direction and the company’s frequent overacting. High energy is all well and good for playing farce, but there must be total conviction in the truth of each action, no matter how exaggerated. As Farrington says, and this production bears out, "farce is downright daunting, either to write or to perform." Brooks has choreographed some wild physical business but, perhaps because it was still early in the run when I went, the actors didn't own it yet; timing was sloppy and precision was lacking.
The Pearl actors shout and mug a lot but only Curran holds the key to making the caricaturish broads she plays both comically broad and humorously human. Cover and Botchan work too hard at being funny, Mixon could use the comic panache of Nathan Lane, whom he actually resembles, and Heberlee is hit or miss. If you see the show, you might find it instructive to view a YouTube clip of the first few minutes of Le Dindon as played in 2003 by the Comédie Française. The action is the same as in The Dingdong but, oh, how different the acting is. Even a full-length, modern-dress, French version using a bare stage with the simplest of furnishings is instructive.

Sandra Goldmark’s mildly attractive set is a white-walled room for Vatelin’s home, with upstage double doors and a door to either side. A slight rearrangement of the walls transforms the space into the two hotel rooms we enter in the second act’s two scenes, with different panels placed on the wall to differentiate one from the other. The period costuming by Amy Clark is adequate, only some of it smartly stylish, while several costumes, like the dowdy taupe hat and dress worn by Lucy, or the ridiculous outfit worn by Redillon, are eyesores. For a comparison, check out Lucy's chic ensemble in the Comédie Française version noted above. 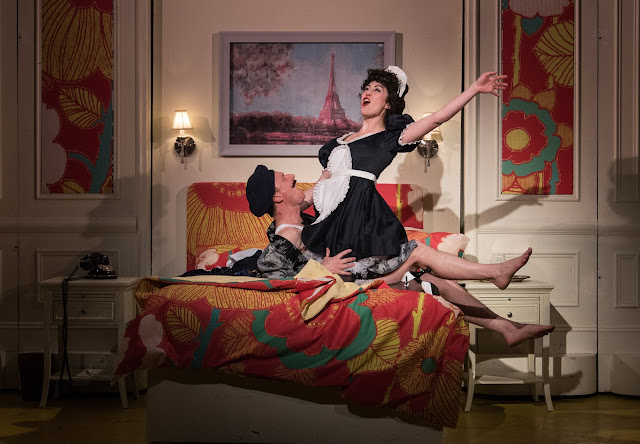 Much as I enjoyed how Shanahan’s adaptation has made Feydeau’s play viable for English-speaking audiences, I’m afraid the Pearl’s production, apart from the delectable cranberry sauce and stuffing of Kelley Curran’s comic versatility, veers too closely to the actual meaning of Le Dindon, i.e., the turkey.