"A Sea of Troubles" 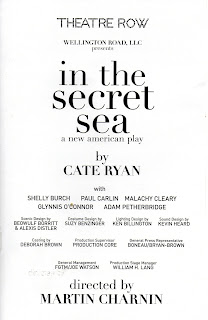 As Cate Ryan’s” In the Secret Sea, “a new American play,” begins, its look and tone suggest we’re in for a conventional domestic comedy. A middle-aged, well-dressed couple, Gil (Paul Carlin) and Joyce (Glynnis O’Connor), have just returned from Easter Sunday services to their beautifully appointed home in suburban Connecticut. As they prepare for an unwelcome luncheon visit from Jack (Malachy Cleary) and Audrey (Shelly Burch), their newlywed son Kenny’s (Adam Petherbridge) in-laws, they snipe at each other in a way revealing the typical strains in a marriage of several decades; they also display their mutual affection or, at least, how they accommodate one another’s less attractive tics. But the laughs are infrequent and mild, and a darker tone keeps intruding. Certainly, the play’s moody title, which is what her doctor called Joyce’s womb when she was pregnant, has nothing cheery about it.
Gil criticizes Joyce for hypocritically sucking up to their Catholic priest, whose self-serving sermons are pushing Gil “this close” to atheism; Joyce, however, appears to hew more closely to her faith. They slash at their expected guests, starting with Joyce’s annoyance at Audrey’s nerve in asking her to prepare Easter lunch at only three days’ notice. Gil, who’s always had a very close relationship with Kenny, a former Marine who served in Afghanistan and who works at Gil’s real estate firm, is depressed about this being the first Easter his son hasn’t been at home with his family. Kenny’s wife, Gail, is pregnant, the outcome of which Joyce hopes will take Gil’s mind off Gil's doldrums.

In moving her action forward, Ryan depends heavily on “well-made play” contrivances, such as when Gil suddenly brings up the question of why he and Joyce never had another child, a topic dropped into the dialogue like a rock as preparation for what will follow. Finally, Kenny arrives in a funk and, after endless prodding, reveals what's bothering him. It takes forever to get to this point and another forever for him to spit it out, with Ryan milking the disclosure as if playwriting were a dairy factory. The reveal, which constitutes the play's mainspring, happens about one-third through, so here's a spoiler alert: Gail is in her fifth month and her fetus has been diagnosed with a very serious disability. If it's brought to term, life will be hell for the child and everyone else
Naturally, the subject, despite the contrived playwriting, grabs you unrelentingly by the heartstrings. Jack and Audrey, just as nicely dressed and successful as Gil and Joyce, enter; they're convivial but just as liable to be on each other’s case as are their hosts. Ryan needs to get the grandparents alone together so she concocts a way of getting Kenny out of the house, thus allowing the elephant in the room to come stomping forth. The initially wary foursome—neither couple at first knowing if the other one knows—argue about what should be done, even engaging in the blame game (which Gil and Joyce already played before their guests arrived) regarding how the crisis came to be.

Whether or not you know people who’ve faced a dilemma like Kenny and Gail’s, you’ll sit in rapt silence as you listen to the arguments fly for one solution or another. If, like me, you know a couple who've gone through this nightmare, your heart will pound and your eyes well. I admit not having been this touched in the theatre in ages. The opinions voiced are passionate, of course, but not necessarily the ones you might expect, nor might you guess who holds which views. But since it's the grandparents who've commandeered the podium, we're deprived of hearing from those most immediately concerned, particularly the mother. The arguments, while moving, are mostly emotional and moral, and get mired in too-conveniently remembered personal tragedies. While the ramifications of situations like this are rarely examined on stage in so instantly relatable a context, you're unlikely to come away enlightened or with your beliefs altered, no matter what they are.

In the Secret Sea has been given a polished staging by veteran helmer Martin Charnin (Annie), with a classy-looking living room setting by Beowulf Borritt and Alexis Distler, fashionable garments by Suzy Benzinger, and quality lighting by Ken Billington. The attractive ensemble, which looks ready-made for a TV special, is generally on target but it does have its overwrought moments; these could easily be blamed on the playwright's strained mechanics, including a scene built around a Google search.
Cate Ryan has found a meaningfully engaging subject; her flawed but well-meaning characters and situations, melodramatic as they are, will move many theatregoers. You can argue with the clumsy remembrances each of the couples calls upon to justify their positions, or with the play’s egregiously sentimental epilogue, with its quote from Yeats's beautiful "The Stolen Child," but the core issue—for all the superficiality of its treatment—is affecting enough to keep you in your seat for the play's 80 intermissionless minutes.
OTHER VIEWPOINTS:
Show-Score

In the Secret Sea
Beckett Theatre/Theatre Row
410 West Forty-Second Street, NYC
Through May 21