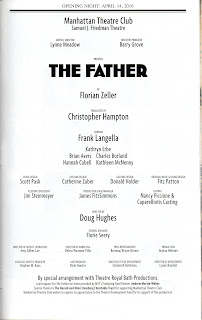 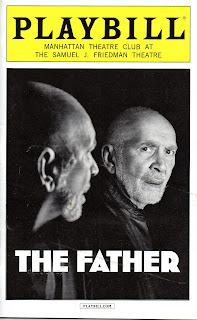 Perhaps you’ve been here before. In French playwright Florian Zeller’s The Father, an aging man is suffering from dementia and his loved ones are struggling to decide if he should be institutionalized so they can proceed with their own lives. As I noted recently in my review of Dot, it’s a subject that’s become a regular part of the last few theatre and film seasons, obviously in response to the increasing attention Alzheimer’s and related mental illnesses have been grabbing in the zeitgeist. There are fine things in this 90-minute, intermissionless, Manhattan Theatre Club production of Christopher Hampton’s translation, but the finest is Frank Langella’s performance in the title role, played in London by Olivier Award-winning Kenneth Cranham

Familiar as the material is, Zeller manages to establish a magnetic connection between audience and play through his deceptively modest dramaturgy. His goal is to show the gradual dissolution of his hero’s faculties almost from the inside out. On the outside, we see André (Frank Langella), a sturdy, still charming octogenarian who used to be a tap dancer (or was it an engineer?), and who lives in Paris with his daughter, Anne (Kathryn Erbe), and her husband, Pierre (Brian Avers) at their flat. Or is it really André’s flat? And is that man who’s getting impatient about André's illness actually Anne’s husband? Is she even married? Isn’t she divorced and going off to live with her lover in London, making it impossible to look after André? And who exactly is Antoine? Or that nice woman named Laura (Hannah Cabell) hired to care for André? Is she that darkhaired woman or that blonde (Kathleen McNenny) he doesn’t recognize? Why is he always looking for his watch, which he blames others for stealing? What happened to that chicken Anne brought home for dinner? And why do the flat’s furniture, books, paintings, and the like keep vanishing?

However surrealistic the developments may appear, especially as enacted on Scott Pask’s attractive, green-walled Parisian flat, they’re all intended to reflect Andre’s distorted perceptions of the people and events around him, perceptions that shift from scene to scene as well as within the 15 scenes themselves. Marking the scene transitions are annoyingly flashing lights (Donald Holder designed the lighting) surrounding the proscenium, perhaps meant to suggest synaptic processes. Sure of himself at first, and insistent that he’s perfectly fine, André’s self-confidence and the casual charm he can still wield gradually diminish as his confusion and rage grow; he lashes out defiantly, and his nastiest impulses emerge, like declaring his affection for Elise, the daughter whose death he’s apparently forgotten, over the saintly, long-suffering Anne.
Under Doug Hughes’s direction a fine cast, wearing Catherine Zuber’s everyday costumes, offers coolly restrained performances of reasonable people groping with a universal problem. Traumatic as the circumstances are, everyone keeps their emotions in check and no one is especially interesting. Even when Anne’s husband gripes about having to contend with André’s illness, the lid stays on the pot, while Anne herself, despite the anguish she faces daily, shows unyielding patience.

Within this reserved context Frank Langella’s performance of André as a proud man trying to hold on to his fading sanity is powerfully compelling. Langella, 78, has always been a dominating actor, a throwback to those grand oldtime stars of physical stature, vocal richness, heightened elocution, and elegant gestures. These attributes can sometimes make him seem theatrical, even hammy, if you will, but they work perfectly for André, even if he never was the dancer he claims to have been. Langella’s innate grandiosity only makes the pathos of André’s descent into infantile dependency that much more tragically moving.
Dementia is a depressing subject that, apart from anything clinical one might learn, has limited dramatic purposes other than to create empathy for its sufferers. It offers actors a field day at exploring difficult aspects of the human condition, but, in the end, seeing it faithfully represented in play after play is a game of diminishing returns. The Father treats the subject with compassion but, given my own wife's familiarity with its victims, I can well understand why she chose to stay away.
OTHER VIEWPOINTS:
Show-Score