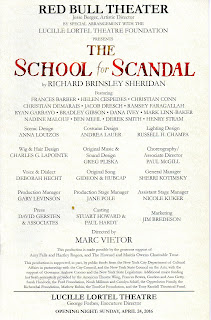 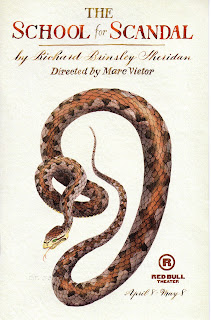 It’s an undisputed fact that Richard Brinsley Sheridan’s 1777 comedy The School for Scandal remains one of the finest examples of its kind, a play that audiences two and a half centuries later can still laugh at uproariously while also appreciating the truth of its scathing attack on hypocrisy and the insidious effect of malicious gossip. As they say, the more things change the more they remain the same. When the late critic Harold Clurman attended John Gielgud’s revival of Sheridan’s play in 1963, he wrote: “A lady of high literary eminence confessed the other night in the lobby of the Majestic that she felt a little self-conscious at the play because the kind of gossip and convivial malice it satirized was exactly the pastime in which she and most of her friends indulge.” The spread of social media in recent years has served to make the situation even worse.


So it’s great that the Red Bull Theatre, whose “cornerstone” since its founding in 2003 has been plays of the Jacobean era, has jumped ahead 150 years or so with its sprightly if sometimes dubious staging of The School for Scandal at the Lucille Lortel Theatre. This marvelous work contains delightful dialogue and richly humorous situations that can still inspire bursts of rollicking laughter. New York revivals of Sheridan aren’t common, of course, although the Pearl Theatre pulled off a charming production of The Rivals two years ago, so one would think it behooves any company seriously dedicated to reviving less-seen classics to respect the original works. (And, by the way, this is not a Restoration comedy, as some reviewers mistakenly claim; it was written 117 years after the Restoration began and 77 years after it is usually said to have ended!)
Of course, most Shakespeare plays are so familiar that audiences welcome innovative approaches, but is The School for Scandal so well-known that directors can with impunity alter important characters like the Jewish moneylender Moses by turning him into a cigar-smoking, Godfather-like character in black fedora and shades named Mr. Midas (Derek Smith)? Or, for reasons I fail to comprehend, to turn Sir Oliver’s friend Rowley into a bearded, turbaned Muslim from the Punjab named Master Ranji (Ramsey Faragallah)? This isn’t to say the play can’t be goosed up for comic effect where appropriate, even by moving its period forward (which has been done), but to change important characters so egregiously with such minimal comic payoff reveals either a lack of faith in the original's ability to what its author intended or the director's ambition to show how clever he is.
Apart from these distractions, director Marc Vietor’s nearly two and a half-hour production is generally faithful; it moves swiftly and energetically, has an attractive and flexible setting by Anna Louizos that captures the appropriate 18th-century ambience, and is nicely lit by Russell H. Champa.  Andrea Lauer’s costumes, though, are a colorful but otherwise unexceptional mix of more or less authentic late 18th-century and anachronistic styles, with Charles G. LaPointe’s wigs being an equally eclectic mix of historical and relatively modern; several, like the green monstrosity worn by Snake (Jacob Dresch), try to be outrageously funny but succeed only in being annoyingly unattractive. Highlighting the design team’s mingling of styles is the musical background, which includes an original song by Gideon & Hubcap in a faux traditional style along with original music by Gregg Pliska, whose sound design also includes 20th-century background tunes, like “I’m Gonna Sit Right Down and Write Myself a Letter.”
The central action of the plot—which has the usual subplots—concerns the secret return from India (“the Near East” in this version) of the extravagantly wealthy Sir Oliver Surface (Henry Stram), loving uncle of Joseph (Christian Conn) and Charles (Christian DeMarais), and his disguising himself as a moneylender named Premium to determine which of his nephews is deserving of his largesse: the sentimentalist, moralistic Joseph or the hedonistic, profligate Charles. Of course, Joseph proves the hypocrite and Charles the honest one. The other principal plotline follows the marital friction between Sir Peter Teazle (Mark Linn-Baker), the well-to-do older man who marries the much younger, free-spending Lady Teazle (Helen Cespedes); she’s been flirting with the lecherous Joseph, an affair uncovered in the play’s famous “screen scene,” whose exquisite construction resembles something from a bedroom farce by Feydeau. Surrounding these actions is the behavior of a pack of wolfish gossips, gobbling up any tasty-looking mortals in their sights.
These scandal mongers carry the Ben Jonson-like, character-defining names of Lady Sneerwell (Frances Barber), Snake, Mrs. Candour (Dana Ivey), Sir Benjamin Backbite (Ryan Garbayo), and Crabtree (Derek Smith). As is often the case with American performances of British comedies of manners by male actors, those playing Snake, Backbite, and Crabtree make them into effete poufs, smothering their cutting witticisms with mincing behavior. Barber and Ivey (in an amusing Maggie Smith-lite portrayal) acquit themselves well, though, especially the British-trained Barber, who uses her sharp-edged voice to slash and slice the subjects of her spite. She has a fine moment at the end when her machinations are exposed and her wig knocked off, revealing how easily surfaces can deceive. It’s a point Sheridan emphasizes by calling the brothers Surface, their true characters belied by their external behavior, just as the disguise worn by Sir Oliver is a false cover hiding its wearer’s real nature.
Linn-Baker’s Sir Peter, while not one for the ages, captures the man’s marital frustrations and avuncular good nature without pushing for laughs while DeMarais’s prodigal nephew Charles offers a feast of hearty bonhomie and innate decency. Conn’s Joseph is technically fine, and handles the screen scene well, but lacks the deliciously insidious nastiness beneath his skin to make us love/hate him as we should. Stram brings a playful, almost boyish joy to Sir Oliver’s role-playing, although he’s occasionally in danger of going too far. Cespedes’s Lady Teazle and Nadine Malouf’s Maria (Charles’s love interest) offer spirited if conventional performances while Faragallah’s Ranji is stalwart, interesting mainly for the unexpected but completely unnecessary exoticism it brings to Sheridan’s world.
It’s good to see any local production of this great play, even if its production is marred by this or that misstep, but it’s painful to see it manhandled for no good reason by completely changing the nature of two principal characters. Just think what Mrs. Candour or Lady Sneerwell would make of that in their school for scandal!
OTHER VIEWPOINTS:
Show-Score

The School for Scandal
Lucille Lortel Theatre
121 Christopher Street, NYC
Through May 10