"Another Infusion of Pipe Tobacco, Please!" 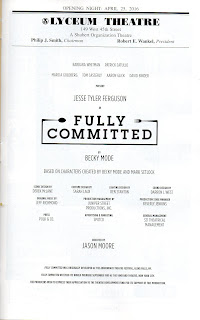 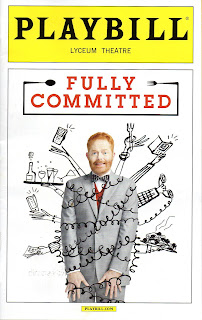 In Becky Mode’s one-man play, Fully Committed, the fresh-faced, red-haired and bearded comic actor Jesse Tyler Ferguson, one-half of the gay couple on TV’s hit sitcom “Modern Family,” plays—among many other roles—Sam, a reservations clerk at “a world-renowned, ridiculously red-hot Manhattan restaurant.” The first thing that came to mind as I watched him field a nonstop barrage of phone calls seeking impossible-to-get tables at his unnamed bistro was Dorsia, the fictional, super-exclusive eatery that wealthy serial killer Patrick Bateman hungers to get into in Bret Easton Ellis’s 1991 satire on American consumerism, American Psycho, now a Broadway musical. Even the outrageously satirical ingredients of the restaurant’s haute cuisine bring to mind the unheard of (for us hoi polloi) items delicately scarfed down with Bellinis at Easton's Dorsia and other restaurants. Items like “edible dirt” or “smoked cuttlefish risotto in a cloud of dry ice infused with pipe tobacco” sound like a spot-on satire of Easton’s satire.
Apart from that appetizer of a reflection, this slightly updated version of Fully Committed, which opened for a 675-performance run at Off-Broadway’s Vineyard Theatre in 1999, starring Mark Setlock, and then enjoyed runs at other major cities, didn’t tickle my palate as much as it did the other gourmets around me; a friend didn’t stop laughing throughout and predicted that its star would be nominated for a best solo performance award. Given the remarkable amount of energy Ferguson expends under Jason Moore’s (Avenue Q) direction, and the great diversity of the 40 some odd characters he covers, such a prediction is probably on-target, although, personally, I strained to make my smiles audible. Also, Broadway’s Lyceum Theatre seems a rather cavernous environment for a piece demanding the intimacy of an Off-Broadway house, where the acting need not be so broad to get its points across.

One day in early December, Sam, a struggling actor from the Midwest who earns his bread working at the restaurant, is forced to handle the many calls coming in because Bob, the reservations manager, claims to be having trouble getting to work. The reservations are handled at a desk in a dingy basement room (designed by Derek McLane and lit by Ben Stanton) lined with pipes and various restaurant junk. A huge collection of wooden chairs hangs from the flies. Sam handles the callers via a headset while a red wall phone is used by his boss, a nasty celebrity chef whose specialty is “molecular gastronomy.” Sam’s cell phone connects him to people from his private life, like a rival actor, his widowed dad, or his brother.
These three phones keep Sam running from one to the other as he tries to calm down or otherwise satisfy the demands for reservations at a place so busy you need to ask for one months in advance, a delicate balancing act when entitled VIPs insist on being seated (among them Gwyneth Paltrow via her swishy personal assistant). The play’s title is the restaurant’s euphemistic way of saying it’s all booked up. Sam answers the constantly ringing phones, puts people on hold, bickers with the power-hungry French maître’d, is ordered to clean up a sick customer’s bathroom droppings, worries about the outcome of an audition at Lincoln Center, frets about getting home for Christmas, deals with a helicopter agency on the self-centered chef’s behalf, and is otherwise put through a Job-like ringer until, finally, the worm turns and he’s able to take control on his own terms.

Ferguson portrays not only the people I’ve mentioned but socialite dowagers, a Mafioso, other employees, a Southern belle, a woman whose reservation can’t be found, and so on. For each he strikes a different pose, uses unique gestures, or a new voice or accent. Keeping all these balls in the air as he rapidly shifts from role to role is an admirable technical feat but eventually the material bogs down in repetitiousness and lack of dramatic (rather than nervous) tension. Ferguson is likable and skillful but, with the characters being so cartoonish and the need to differentiate them requiring such obvious choices, his enterprise becomes more a technical than an artistic feat.  Even for a performance lasting but an hour and 20 minutes, it occasionally becomes as tiring for the audience as for the star. Maybe it needs an additional infusion of pipe tobacco to get our hearts racing again.