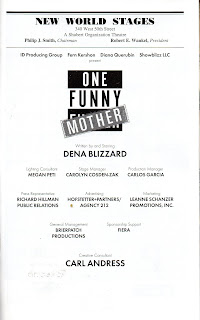 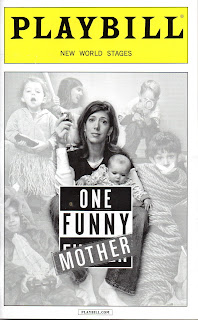 One Funny Mother (whose program cover suggests the last word is pasted over one starting with the letter "F") is one funny/hilarious one-woman show, and Dena Blizzard, its writer-star, is one funny/hilarious woman. She’s been doing this show at various venues but this is its New York premiere. Everyone around here knows someone like Blizzard (I really feel like calling her Dena), an attractive suburban mom (she’s a former Miss New Jersey 1995) in her 40s with a  potty mouth and a way of throwing out raunchy wisecracks about kids, parenting, marriage, and sex that are pee-in-your-pants funny and stingingly (in a good way) honest. Her solo show, currently running only on Thursdays and Saturdays at New World Stages, has the physical look of a regular one-person play but it leans heavily toward the stand-up comedy portion of the spectrum, (Carl Andress is the “creative consultant.)


Even Dena’s program note may make you smile with comments like: “This show is hilarious! Some newspapers have said that too, but you’ve probably never heard of those papers because they have local produce coupons in them.” There’s a friendly vibe about the whole thing, from the woman out front selling souvenirs of the show, including thongs (the crotch kind, not the foot kind), to the raffle forms asking audience members for their “funniest mom moment,” to the videos shown on both sides of the stage before, during, and after the show,

In them Dena, her spouse, her three prepubescent kids, and various amusing talking heads (especially a rotund African-American man who deserves his own show) participate. There’s even “A Note from Dena’s Kids,” written by Dean, Jacqueline, and Brooke when the oldest was 9; a recent Times piece pegs them as now being 16, 13, and 11. Among its comments: “Our Mom has black hair, black and white skin and she wears fancy shoes. She has brown eyes and a squishy butt.”
The uncredited setting (lit by Megan Peti) is merely a slip-covered couch, a kiddy chair, and a kitchen set, with laundry, toys, and family junk scattered all over. It’s like Sandy and Katrina had gotten together and decided to have a hurricane in Dena’s living room. Dena, at first wearing jeans and a denim shirt and later switching to a housedressy frock and slippers before finally appearing in a black party dress, talks directly to us in a rambling monologue; you feel like you’re her house guest as she casually folds laundry and cleans up the mess while her kids are at school and her hubby’s at work. There’s enough disarray to keep her busy through the whole performance.

Dena’s always got a glass of wine at hand, but every now and then she plucks a tiny liquor bottle from some hidden place and downs it before discarding it in some other secret spot. Everything’s done in an off-the-cuff, unforced way that builds laughs as the drinks pile up. It's easy to see that, while she doesn't actually play "drunk," her reliance on alcohol jokes may not be everybody's cup of booze.
Dena's material covers the daily grind of being a mother, fears of growing old and losing one's physical appeal, how romance and sex become marital afterthoughts, how moms react to kids’ behavior, an aging mother’s flatulence, the funny side of an aunt's ailments, and so on. We laugh at how kids see various letters spelled out by their poop, how a woman can discuss vaginal problems with other women while men keep their penis issues private, and the unexpected consequences of breast reconstruction. Much of this is familiar, but Dena squeezes every laugh out it. I was there with my middle-aged daughter, a mother of two, and we both guffawed loud and hard.
At one point Dena has a give and take with the audience, asking several men what they do for a living. One guy when I went was in the egg business and another (a Brit) worked for the UN. Her improvisational riffs on each were uproarious. Then she turned to me, “the man in the sweater,” and, keeping it simple, I said I was “a critic.” Suddenly, she suddenly shifted her posture to show off her figure and brought the house down with a crack about not wishing to prolong our conversation.
Not wishing to further prolong this report, let me simply recommend One Funny Mother as a very funny, and I do mean funny, evening with one very funny (again) mother.