“What Goes Around Comes Around” 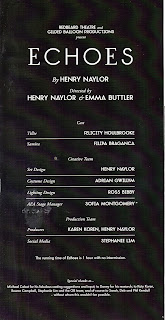 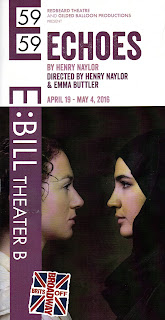 The number of plays seeking to come to grips—slippery as that may be—with the ongoing problems of the Middle East is tiny. Thus, even a minor effort like Echoes, an offering in this year’s Brits Off Broadway Festival at 59E59 Theaters, is a welcome addition to the slowly accumulating pile. Henry Naylor’s award-winning two-hander, directed by Naylor and Emma Butler, was first produced at the Edinburgh Fringe before transferring to London’s West End. It also succeeded at the Adelaide Fringe, and, given the simplicity of its technical requirements, will likely travel widely.


Naylor’s interestingly topical, if overly schematic, 50-minute play presents two women’s thematically similar stories, side by side. Each is a monologue delivered straight to the audience, interrupted only when the other woman speaks. The monologues incorporate whatever dialogue the stories require. Bleak as the stories are, Naylor has a way with words, and provides enough laughs to keep the piece afloat. While the characters move about in close proximity they never actually interact. Naylor’s set, simply but effectively lit by Ross Bibby, is a black-painted open space, with a stool as the only set prop. The word “ECHOES” is splashed two times in white paint on the black upstage drop.

When we meet these bright, educated, young women, they’re 17 and living in Ipswich, England. However, the fair-skinned Tillie (Felicity Houlbrooke) lives in the mid-19th century, while the olive-skinned Samira (Filipa Braganca) is our contemporary. Tillie is Christian; Samira is Muslim. Tillie wears a lovely, white, Victorian-era dress, with a scoop neckline, while Samira is garbed head to toe in traditional, black, Muslim garb, only her face visible under her hijab. (Adrian Gwillym did the costumes.)
Tillie, wishing to produce children for Britain’s Christian empire but disappointed by her local prospects, decides to journey to India with the Fishing Fleet, the name given to the considerable exodus British women made to hunt for husbands in India, where thousands of men had migrated to serve under the Raj. She meets a military officer en route and, despite signs of his obtuseness, marries him. He’s soon stationed in Kabul, Afghanistan, where Tillie’s belief in Christian values collides with the maggoty rot (a frequently used metaphor) of British imperialism, whose worst elements are embodied in her brutish husband.
Simultaneously, we discover that Samira, daughter of Syrian refugees, has been radicalized because the tabloid press ignores Muslims in favor of sensationalistic news, and politicians like the xenophobic Nigel Farage hold power (if true, it’s hard not to think what will happen if Donald Trump becomes president). Her accent, language, and behavior could be those of any English teenager, but she decides to abandon her middle-class life and sneak off with a friend to the ruins of Raqqa, Syria, to marry a jihadist soldier she’s been introduced to on Skype. There she thinks she’ll help to build a caliphate. Like Tillie, her marriage is a rude awakening to the cruelty of the man she married and the fanatical religious ideals he stands for, and she decides to make a bolt for freedom.
Playwright Naylor’s heart is in the right place, from a historical, political, and feminist standpoint; his wish to show two women separated by 175 years both trying to butt heads with the political, sexual, marital, and religious injustices of their particular times is a good one, as is his point that Western barbarity toward colonized subjects is not far removed from the excesses of ISIS. But, while Tillie’s story could certainly have happened to a specific individual, it’s hard to accept it as representative of what Victorian women underwent when joining the Fishing Fleet.

Samira’s story, also replete with melodramatic elements, rings slightly truer because we read of girls like her who have abandoned their middle-class lives in the name of jihad only to be disillusioned, risking their lives in an attempt to return home. Whatever one may think of Tillie's fate, given the limited access she would have had in Victorian Ipswich to information about the worst aspects of British imperialism, it’s hard to fault her for the adventurous spirit inspired by her quest for a spouse, even if she should have known better than to choose the lout she weds.

Samira, though, isn’t given strong enough reasons for her too-rapid radicalization and hatred for “kuffars”; while it’s true that many naïve girls do seek the paradise of jihad over the comforts of Western life, Samira seems too smart not to have known that soldiers like her Syrian spouse-to-be enjoy cutting off people’s heads and blowing them to bits, in addition to their erratic sexual proclivities. Tillie didn’t have the Internet; Samira does. Whatever idiocy other Western-bred Muslims may display in going off to Syria, it simply doesn't compute for this particular girl. The result seems to be a convenient but false equivalency between the two women’s stories. A scarier approach might have been for Samira to overcome her initial hesitancy and, like the friend with whom she went to Syria, follow through on the radical path she'd begun.

Houlbrooke and Braganca give committed, intelligent performances, ably changing their voices and attitudes to characterize the various people they reference. I wish I could have been more enthusiastic about the play itself, but it’s only fair to note that, as we left the theatre, my companion disagreed with me about it, and was echoed by another theatregoer who’d heard us talking. Echoes encourages conversation, and, for that reason alone, you may find it worth a visit.

Echoes
59E59 Theaters/Theater B
59 East Fifty-Ninth Street, NYC
Through May 4