“Nothing to Scream and Shout About” 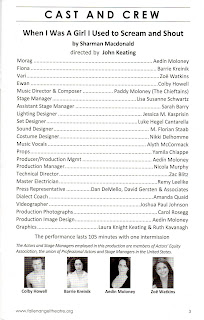 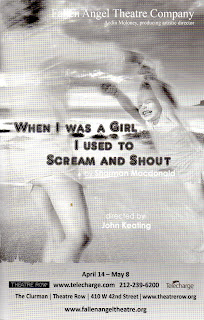 Anyone attending this modestly effective staging of Scottish playwright Sharman Macdonald’s lumpy dramedy, When I Was a Girl I Used to Scream and Shout, which premiered in London in 1984 and was seen Off-Off-Broadway in 1998 starring Roberta Maxwell, can be forgiven if they think they’re watching an Irish, rather than a Scottish, play. It’s directed by the wonderful Irish Rep regular John Keating, and produced by Fallen Angels, a local company “committed to presenting outstanding & dynamic Irish and British plays written by and about women,” whose producing artistic director is Irish-born actress Aedin Moloney. Moloney’s father, Paddy Moloney, is the founder and leader of the famed Irish band, The Chieftains, and his traditional-style music makes a valuable contribution to the production. Even the thick accents, which should be Scottish, sound as shamrock-rich as Fionnula Flanagan’s.

When I Was a Girl is a feminist-tinged memory tale of the love-hate relationship between a mother, Morag (Moloney), and her daughter, Fiona (Barrie Kreinik), whom we see, as the script describes it, on “a rocky beach on the east coast of Scotland.” This is suitably suggested by Luke Hegel Cantarella’s setting of pale planking and a small area of stones, with an upstage railed promenade leading to the beach, and a tiny pool at stage left, supposedly carved out of the stone but looking more like a separate concrete structure. When the play begins, in 1983, Fiona, 32 and single, and Morag, 59, have reunited at Morag’s request for a weekend vacation near where Fiona was raised; also there is Fiona’s childhood friend, Vari (Zoë Watkins), a mother of three, whom she hasn’t seen in 17 years. Morag urgently wants a grandchild; when Fiona says she has one, Morag says she’s never held or seen him.

The reason is spelled out in dribs and drabs through flashbacks set between 1955 and 1966, beginning with the four-year-old Fiona and Vari playing doctor with a scenario about penises. Although no four-year-olds would say or do what they do, their precocious dialogue sets up the contrast between their comically innocent misconceptions about sex (where babies come from, pubic hair, periods, breasts, and even lesbianism) and the equally misguided, repressive ideas—like those about God’s reaction to masturbation—with which Morag fills her daughter’s ears. When Morag, whose husband left when she was 37, meets a man who wishes to marry and move away with her to the Middle East, the 15-year-old Fiona, afraid of being abandoned, strikes back by seducing a local boy, Ewan (Colby Howell), so she can become pregnant, hoping to force Morag to stay with her. As the play returns to 1983 for its final scene, we’ve come to understand the varying trajectories the lives of Morag, Fiona, and Vari have taken.
The frequent jumping around in time is a structural convention that drains the play of dramatic thrust. Also off-putting is the characters’ habit of making set speeches (occasionally pretty funny, I admit) rather than engaging in conversation; there’s an especially painful one when Morag, responding to Fiona’s reluctance to go buy sanitary napkins, lashes out about the resentment she felt for the pain Fiona caused her in childbirth, and what a disappointing child she proved to be. Another notable one comes when Vari jealously notes how Fiona’s lack of kids has given her opportunities for self-fulfillment she herself has been deprived of because of the compromises of motherhood and marriage. The most intrusive examples arrive toward the end when the 15-year-old Fiona repeatedly addresses God. Thanks to Macdonald’s lusty writing, some of this is worth hearing but it fails to move the drama needle very far.
The actors chew their words vigorously to make those seemingly broguish accents emerge from Scottish mouths. Watkins is a forceful, outspoken presence, getting the humorous values out of her often scatological dialogue while Moloney brings strong colors to Morag’s maternal crises. Howell makes Ewan sweetly charming and Kreinik plays Fiona with nuance and subtlety.
For all its scattered pleasures, I find it hard to scream and shout about When I Was a Girl I Used to Scream and Shout. Macdonald’s lively language goes only so far. At one point, Morag suggests that the chubby Vari look into Weight Watchers. It’s an idea this two-hour gabfest might consider as well.

When I Was a Girl I Used to Scream and Shout
Clurman Theatre/Theatre Row
410 West Forty-Second Street, NYC
Through May 8