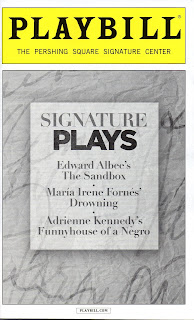 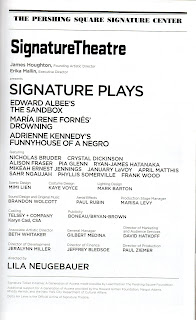 In honor of its 25th season, the Signature Theatre has taken the bold step of reviving a trio of one-acts by three of its Legacy playwrights, Edward Albee, Maria Irene Fornés, and Adrienne Kennedy. Each play was seen during its writer's Playwright-in-Residence season at the theatre. I say “bold” as these plays—two of which have an iconic status in the rise of the American Theatre of the Absurd (even if not technically “absurdist”)—have puzzling plots, situations, and characters. Certainly, none is designed for mass consumption. They’re mostly at home on the stages of academic theatres, where professors and students can contemplate the way they push artistic and intellectual envelopes.
The writers are now all in their mid- to late 80s, Albee having been born in 1928, Fornés in 1930, and Kennedy in 1931. Albee’s “The Sandbox” and Kennedy’s “Funnyhouse of a Negro” were first produced in 1960 and 1964, respectively, while the Havana-born Fornés’s “Drowning” is considerably newer, dating from 1986. These plays, which I find hard to love, and which have little in common, are fortunately in the good hands of excellent actors under the imaginative direction of Lila Neugebauer, whose best work is on view in Kennedy’s play, the most challenging (and least lovable) on the bill.

First up is “The Sandbox,” written in 1959, presented at New York’s Jazz Gallery in 1960, and given its first regular Off-Broadway staging at the Cherry Lane Theatre in 1962. Its prior Signature revival was with two other Albee one-acts in 1994. This nearly 15-minute slap at American “Momism,” as Philip Wylie dubbed it—closely related to Albee’s longer “The American Dream,” with which it was paired in a 2008 New York revival—takes place at the seashore, imagined by Mimi Lien as a yellow floor and yellow wall. Mark Barton’s sunny lighting makes the most of this environment.

Four characters gather, the domineering, emasculating Mommy (Alison Fraser); her wealthy, docile husband, Daddy (Frank Wood), meekly acceding to Mommy’s every whim; a muscular, simplistic Young Man (Ryan-James Hatanaka), doing wing-like calisthenics that will reveal him as the Angel of Death; and Grandma (Phyllis Somerville), Mommy’s 86-year-old mother; there’s also a cellist (Melody Giron), playing as per orders from the others. Mommy and Daddy loll on beach chairs, awaiting the death of Grandma, who lies in a sandbox with beach toys, hinting at both her second childhood and her grave. When Grandma seems on the brink of death, Mommy and Daddy, walk off, congratulating each other on how brave they've been.

Grandma is Albee’s most sympathetic character (he dedicated the play to his own grandmother), speaking directly to us about her life with Mommy and Daddy, where she’s treated like a pet and made to sleep under the stove. Somerville gives her plenty of spunk as someone not quite ready to go gently into that good night. The play, though, for all its reputation, seems more interesting as an artifact from Albee's pre-Who's Afraid of Virginia Woolf? experimental phase, than as a living drama.

After a nine-minute “pause” during which actor Nicholas Bruder casually leans against the stage playing music on an old radio, we view Fornes's three-character “Drowning,” a delightful oddity inspired by a Chekhov short story and done on a two-play Signature bill in 1999. Forne's script locates the action at a cafe, "probably in Europe," but the present setting looks more like an institutional lunchroom.

Subhumans Pea (Mikéah Ernest Jennings) and Roe (Sahr Ngaujah) sit at a table with a newspaper on it. They're waiting for Stephen (Frank Wood). Pea is a naïve, gentle youth whose ignorance is such that he doesn’t know what a newspaper is when he sees one, nor even the meaning of snow. The more knowledgeable Roe is a kindly creature who answers Pea's questions and offers guidance, especially when Pea falls in love with a woman named Jane Spivak whose photo he sees in the paper. But heartbreak awaits when Pea, having met her, is rebuffed. It’s impossible not to sympathize with the sudden self-awareness washing over him; Roe’s tag line, in fact, is “He’s drowning. He hurts too much.” This is beautifully conveyed in Jennings’s sweet performance of a slimy non-human, while Ngaujah’s compassionate Roe provides a perfect match, helping make this surreal piece the most affecting of the generally unaffecting evening.

Perhaps most memorable is how the characters look. Their heads and necks are encased in lumpy, high-domed shapes showing only their faces; they reminded me of the slug-like Jabba the Hutt in Star Wars. Fornés describes them thusly: “Their eyes are reddish and watery. They have warts on their faces and necks. Their bodies are also like potatoes. PEA wears an olive hat, a beige jacket, and greenish-brown pants. ROE wears a brown hat and a brown suit. When they breathe their bodies sweat. Their skin and general shape resemble those of seals or sea lions.”
Neugebauer has wisely staged the play at a snail’s pace, with long pauses, highly deliberate articulation, and slow-motion movement. This approach is far more subtly evocative and moving than the lively, farcical behavior of a production available on YouTube.

After an intermission, we arrive at the pièce de résistance, the admirably acted and produced Funnyhouse of a Negro, replete with theatrical bells and whistles (or smoke and mirrors). However, it quickly becomes apparent why, despite its reputation (its first production won an Obie), Kennedy’s play is so rarely seen. Lien’s setting of a transformable, towering black space with an overhead walkway and door and a huge, canopied bedstead that appears and disappears as needed, benefits greatly from Barton’s magnificently dramatic shafts of light. Kaye Voyce’s period and modern costumes and Brandon Wolcott’s sound design and original music help make the experience visually and aurally memorable.
The would-be poet Sarah (Crystal Dickinson), also called Negro, hates her black missionary father for having conceived her by raping her white mother, creating confusion about her racial identity. Her emotional and psychological plight is embodied in an hour-long phantasmagoria demonstrating her painful struggle to reconcile the separate parts of her African black and European white personas. These contradictory parts are represented by Queen Victoria (April Matthis, in whiteface), the Duchess of Hapsburg (January LaVoy, also in whiteface), the Congolese leader, Patrice Lumumba (Sahr Ngaujah), and Jesus (Mikéah Ernest Jennings, a black actor in a role described by Kennedy as “a hunchbacked, yellow-skinned dwarf”).
Most of Funnyhouse of a Negro occurs inside its heroine’s head. Its lack of dramatic conflict among, instead of within, its mostly abstract characters (who are aspects of Sarah, not individuals), as well as its great reliance on lengthy, tortured monologues instead of dialogue, gradually loses any emotional connection with its audience. Like what happens to its heroine, it leaves them hanging at the end.
Signature Plays is best considered as a well-produced educational event; it offers a seminal play by one of America’s best-known playwrights and two plays, one barely known and the other widely respected (if rarely performed), by ethnically diverse female dramatists. I suspect it will be of interest chiefly to academics and theatre students; for the general theatregoer, not so much.