“To Thine Own Self Be True” 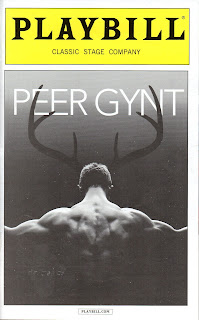 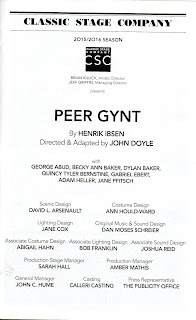 The great Norwegian playwright Henrik Ibsen may have believed that his epic, five-act, 1867 dramatic poem, Peer Gynt, couldn’t be staged but that didn’t stop either him or other ambitious stage directors from attempting to mount it. Nor, at least in America, has it prevented reviewers from finding it unstageworthy when moved from the armchair to the boards. That, at least, was my response to the version that just opened at the Classic Stage Company (CSC). Here's some historical background.


Ibsen cut more than half the script for its first production, in Christiania, a production that, like many later ones, incorporated the music of Edvard Grieg’s “Peer Gynt” suite. In 1907, it received its first full American mounting in Chicago, prior to a Broadway opening at the New Amsterdam, for which its star/director, the great Richard Mansfield, restored over a third of what the playwright had removed; despite the remaining cuts, it still clocked in at over three and a half hours. Later mainstream New York productions, deemed either mediocre or worse, starred Joseph Schildkraut (1923), John Garfield (1951), and Fritz Weaver (1960).

There also have been Off- and Off-Off productions (including Gint, a 1999 “Appalachian” adaptation by Romulus Linney, and a 1999 Shakespeare in the Park version starring Stacy Keach). Such productions usually were clobbered, the only one avoiding annihilation being the Classic Stage Company’s (CSC) 1981 rendering, directed by Christopher Martin, with a little-known cast; it was given over two evenings so as to include the entire text. Even master avant-garde director Robert Wilson fell on his face with his nearly four-hours long, highly stylized, 2006 version at the Brooklyn Academy of Music of which Charles Isherwood wrote in the Times: “‘Peer Gynt,’ unfortunately, is a case in which the director's finely calibrated techniques prove more constricting than illuminating, more desiccating than enriching." (There have been visiting foreign productions as well, including a 1992 Swedish version at BAM staged by Ingmar Bergman in three parts!)
The CSC is revisiting this challenging piece in director John Doyle’s adaptation, which has radically sliced the play to an hour and 50 minutes; it eliminates many episodes and characters, changes the verse to prose, freely revises the dialogue, deemphasizes the fantasy, and uses a cast of seven to play both principal and minor characters. (In contrast, Mansfield’s scenically spectacular version had 48 speaking actors and an ensemble of 138.) The program's character designations suggest considerable conflation; the Troll King is played by an actor dubbed the Doctor (Dylan Baker), the Undertaker (Adam Heller) handles the Button-Molder, and the Bridegroom (George Abud) covers what another translation calls the Lean One (i.e., the Devil). Doyle’s productions usually employ actors who can also play musical instruments; two are present here, Abud and Jane Pfitsch; their music is credited to composer/sound designer Dan Moses Schreier. I imagine the lovely humming sometimes coming from the cast is also Schreier’s work.
Doyle, whose mother must have dreamed of noh theatre when she was carrying him, is best known for his minimalist revivals of popular musicals (Sweeney Todd, The Color Purple); he takes over the CSC’s artistic directorship from Brian Kulick this summer, so it’s likely more shows there will reflect a similar aesthetic. It won’t surprise those familiar with Doyle to find that Peer Gynt’s stage (designed by David L. Arsenault) is little more than a distressed platform, around two feet high, faced by bleachers on four sides, like a boxing arena. Attached to three sides is a step unit on which the offstage actors often sit, leaning on the stage floor, watching the performance, and ready to step in.
There’s no scenery and only the sparest of props, including a whiskey bottle, flower petals, a small box, colored buttons, dollar bills, and a broom to sweep up whatever falls to the ground. Ann Hould-Ward’s modern-day costumes are neutral, mostly in shades of black and gray. Peer (Gabriel Ebert) wears a black suit and white shirt; when he ultimately dons a yellow tie it’s almost as if he were turning on a light bulb. (This scene also stands out because it’s impossible not to think of Peer’s ascent into capitalistic wealth and his desire to become emperor of the world as a mussing of Donald Trump’s hair. Unlike Peer, though, Trump went not from rags but from riches to riches.) This lean approach puts the burden on Jane Cox’s atmospheric lighting, which responds well but isn’t capable of rescuing the otherwise expertly staged production from visual boredom.
Boredom, in fact, is operative throughout this undramatic, highly symbolic “phantasmagory,” as an early translator, William Archer called it. Based on Norwegian folk tales, Peer Gynt is essentially a dramatized philosophical inquiry into and satire of Peer’s search for his true self. (The famous scene of Ibsen’s analogy of Peer’s centerless self to an onion is intact.) It includes both real and fantastical elements, although the fanciful here has been reduced to everyday dullness.
Peer, a poor, rural rube living with his mother (Becky Ann Baker), is a selfish, lying, bragging, womanizing, boozing, opportunistic dreamer, who encounters a series of picaresque adventures, including, but by no means limited to, his abduction and abandonment of a bride (Pfitsch); an affair with the ever-faithful Solveig (Quincy Tyler Bernstine); experiences among the trolls (no, not that kind), whose daughter he agrees to wed; the blocking of his passage by the Boyg, who wants him to "go round" to reach his destination; his survival of a shipwreck; his visit to his dying mother; his loss of his great wealth; his unsuccessful request of the troll king to testify that he's always remained true to his self so he can prevent the Undertaker from melting and recasting him; and a final reunion with the now aged Solveig.

A company of first-rate New York thespians is unable to inject more than momentary life into Doyle’s frugal version of Ibsen’s banquet. Nor is it easy to follow Peer’s peregrinations, especially without visual or verbal markers. Ebert, a wonderfully versatile actor, is onstage throughout and offers a technically proficient performance that never rises to a tour de force because it's unable to inspire continued interest in and sympathy for Peer; it’s nearly impossible to get caught up in his travails, since he seems so obviously an intellectual construct, just like all the abstractions that pass as the other characters.

In 1951, Harold Clurman wrote: “Ibsen's style in this play is an amalgam of poetry, satire, vaudeville, symbolism and 'surrealism.' To produce Peer Gynt so that it is clear--and too much literal or prosaic clarity would be to cheapen and devitalize it--is a formidable task requiring a combination of favorable circumstances and technical prowess that is almost unattainable in the American theatre today.” Whether this assessment still holds true is impossible to determine but the CSC production doesn't help much in arguing against it.

John Doyle's Peer Gynt may end blessedly sooner than standard versions but it still can’t avoid seeming overlong, like so many of its more elaborate predecessors. Bore Gynt would be a much better name for it.