“Eighteen Years in a Barroom” 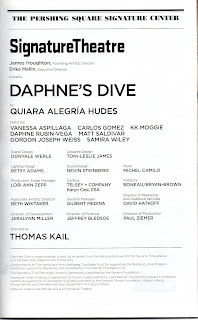 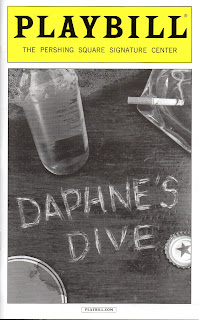 Ever since Shakespeare set Falstaff down with his BFFs in the Boar’s Head Inn, playwrights have never ceased to tire of plunking colorful characters down in barroom settings, often from curtain up to curtain down. Actors have tossed back barrels of phony beer and whiskey in the seedy saloons of classics like Ten Nights in a Barroom, Salvation Nell, The Time of Your Life, Happy Birthday, The Iceman Cometh, and A Touch of the Poet, as well as in more recent saloon sagas like The Legend of Georgia McBride, The Undeniable Sound of Right Now, Radiance, and Songbird.  The latest addition to this collection of whiskey-soaked efforts is Daphne’s Dive, by Pulitzer Prize-winner Quiara Alegría Hudes (Water by the Spoonful); unhappily, this fizzless cocktail of melodramatic writing and acting barely produces a buzz.
The audience sits on bleachers facing two sides of Donyale Werle’s photorealistic set of Daphne’s Dive, a cheap corner bar in a working-class neighborhood of North Philly, where a diverse clientele of five regulars has found a home under the ministrations of Daphne (Vanessa Aspillaga, pushing too hard), the feisty, Puerto Rican bar owner with stomach problems. The action covers the eighteen years from 1994-2011, signified by each scene’s being preceded by the youngest character, Daphne’s adopted African-American daughter, Ruby (Samira Wiley, very good), announcing: “I am eleven,” “I am fifteen,” “I am twenty,” “I am twenty-five,” “I am twenty-nine,” and finishing with a flashback to “I am eleven.” The plot, such as it is, consists of watching the same folks live out their lives, with the usual misunderstandings, tragedies, and successes that normally happen over long periods of time. Some cool jazz and Latin music (composed by Michael Camilo), attributed to an upstairs tenant, accompanies parts of the action.
To make this concept work, the characters or their experiences have to be interesting enough for us to care much about what happens to them during the years depicted. That’s not the case, though, and even Hudes’s vivid dialogue (much of it sex-related) and the vigorous exertions of Thomas Kail, director of the megahit Hamilton, can do little to create excitement (although some vigorous salsa dancing will wake you up in one scene).
The customers—some of whom sprinkle Spanish into their speech—are Rey (Gordon Joseph Weiss, defeated by a shallow role), a freewheeling, middle-aged biker and glass cutter; Pablo (Matt Saldivar, energetic), an artist whose paintings are inspired by trash; Jenn (KK Moggie, struggling with an unpersuasive character), an eccentrically garbed, messianic, Asian-American performance artist and social activist—“Peace! Liberty! Ecology! Democracy!”—clearly based on Kathy Change, who immolated herself; Acosta (Carlos Gomez, nicely grounded), a Latino in the glass business who becomes a politician but whom Jenn condemns as a sellout; and Inez (Daphne Rubin-Vega, colorful and generally convincing), Daphne’s fashionable sister and Acosta’s wife, who has activist leanings.
Each gets to express their individual stories; dark secrets are divulged; someone dies in spectacular fashion; there’s a lesbian encounter and a marital crisis; and, at the heart of the play, Ruby grows up and works out her personal issues with the motherly oversight of Daphne, who rescued her from a dangerous family situation. There are thoughts about people having to fight for their dreams, and how heroic it is merely to survive life’s daily crap, but the messages—if you can call them that—get muddled in characters whose behavior, replete with passionate explosions, appears forced for dramatic effect. Way before the tortuous, intermissionless hour and forty minutes are up even teetotalers may begin thirsting for the bottles behind the bar in Daphne’s Dive. And, judging by the lack of customers passing through its portals, I’m sure she could use the business.