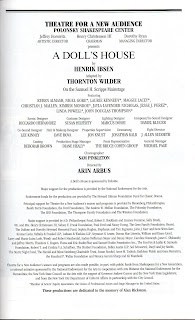 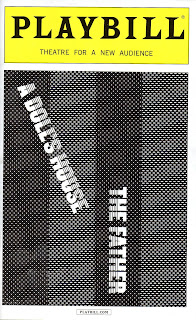 In the late 19th-century Scandinavia suddenly emerged as the birthing place for two of the most advanced and universally influential dramatists of the modern theatre, Norway’s Henrik Ibsen (1828-1906) and his younger contemporary, Sweden’s August Strindberg (1849-1912), who happened to be bitter rivals. For whatever reason, the flow of internationally acclaimed playwriting from their corner of Europe died with them, but their legacy continues in the influence they had on theatre ever since. An excellent way to see and compare these giants is to visit Brooklyn’s Polonsky Shakespeare Center, where Theater for a New Audience (TFANA) is producing Ibsen’s A Doll’s House (1879) and Strindberg’s The Father (1887),* written within a decade of each other, in rotating repertory with the same company of actors. TFANA founding artistic director Jeffery Horowitz notes that both were written when women’s emancipation was a burgeoning issue and that “the two plays present stark contrasts about marriage and relationships between the sexes.” 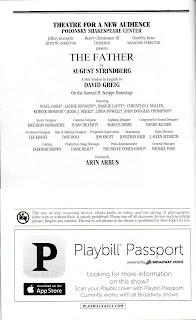 Ibsen continues to be, at least in the U.S., the more frequently performed of the pair, as witness another important New York revival of his work, the Classic Stage Company’s Peer Gynt, also opening this week. A Doll’s House, of course, is far more frequently seen than the rarely produced Peer Gynt, or, for that matter, possibly of any other Ibsen play. In fact, just in the last couple of years, there have been two prior productions of it, one starring Britain’s Hattie Morahan as Nora at BAM and the other with Jean Lichty at the Cherry Lane in the Ingmar Bergman version titled Nora. One can be forgiven for hoping that whatever director next played with A Doll’s House would find a new way to justify yet another staging so soon after that famous door had slammed shut on its predecessors. Apart from the ambitious idea of playing it opposite The Father, and the insights that sparks, not much new is to be gained from this particular rendition.

Arin Arbus, TFANA’s associate artistic director, uses Thornton Wilder’s heavily trimmed adaptation (based on earlier German and English translations). Wilder, who did the job while working on his masterpiece Our Town, prepared it for Jed Harris’s successful 1937 Broadway production, which starred Ruth Gordon and ran 142 times; it wasn’t revived for another New York production until now. Arbus provides a faithful, two hour and 15-minute version that differs in no striking respect from the play’s predecessors, regardless of who translated them.
This is perfectly acceptable, given the play’s continuing power to hold an audience in thrall—with its well-constructed, melodramatically contrived machinations, made even sharper by Wilder’s tinkering (which eliminates Thorwald’s pet names for Nora), and its carefully crafted depiction of a marriage whose seams are slowly coming undone. However, one of the things one looks for in any revival of A Doll’s House is how much illumination it brings to the central character of Nora, the superficially child-like wife of a man whose self-centered, patronizing attitudes ultimately convince her that she can no longer live with him and lead to her walking out and leaving both him and her two young children behind. In the late 19th century such behavior was unheard of and made the play one of the most notorious of the day.
Maggie Lacey is the attractive actress saddled with this dilemma in Arbus’s period-appropriate production (costumed by Susan Hilferty), in which most of the audience sits in steeply banked bleachers facing two sides of a narrow, wood-planked stage designed by Riccardo Hernandez, with tall white walls and doors at either side. For most of the play, she works hard at capturing Nora’s chipmunk-like simplicity, an act of helplessness and deference she assumes to navigate her relationship to the paternal benevolence of the ambitious Thorwald (John Douglas Thompson). But she always seems to be acting, making him seem that much more obtuse for not seeing it for what it is.
She continues this routine throughout, showing barely any glimmer of the steel she belatedly demonstrates when Thorwald, discovering how she did something illegal in order to save his life, turns on her in disgust. Her decision to pack her bags and leave comes so swiftly, and her icy demeanor when she confronts Thorwald with her decision, seem to be coming from another character entirely. It’s even possible this lack of organic unity to her evolution stems from Wilder’s adaptation; regardless, it only serves to emphasize the artificiality of her action and to defeat its human truth. Lacey’s performance, in fact, makes Nora a much less sympathetic character than usual; her proclivity for lying and her ignorance about the ramifications of her behavior seem rather pronounced, making her decision to leave that much more troublesome; this Nora is as much at fault as her spouse in regards to what’s gone wrong in their relationship.
Melodrama also infects the performance of Thompson, who plays his early scenes with the well-regulated charm of a kindly if chauvinistic paterfamilias but whose angry behavior in the later scenes, when he discovers the letter incriminating Nora, is a touch overblown. In comparison to his performance in The Father, though, Thompson’s Thorwald is a model of restraint. Jesse J. Perez’s Krogstad, who can seem anywhere from sympathetic to villainous, is closer to the bad guy part of the scale, with his long, ominous overcoat, oleaginous air, and overly precise diction. Nigel Gore plays Dr. Rank nicely with a British-accented light comedy touch, and Linda Powell’s Christine Linden is grounded and sympathetic.
Seeing The Father a night after A Doll’s House proved instructive, given that Strindberg’s drama—inspired by his unhappy marriage to Siri von Essen—was a response to Ibsen’s depiction of a modern marriage. Arbus’s production, using a new version by David Greig that reduces the original three acts to a single act running an hour and 45 minutes long, uses the same layout as A Doll’s House; however, the latter’s white walls are replaced by heavy wooden panels adorned with guns and dead animal skulls, symbols of the occupant’s masculinity.

That occupant is Adolf (Thompson), the Captain, a geologist who joined the military for the security it offered, and who finds himself in mortal combat with his wife, Laura (Lacey), over their clashing opinions on what’s best for the future of their young daughter, Bertha (Kimber Monroe); the Captain, who insists he has the authority to decide, wants to send her to university, Laura wants her to stay home and develop her skills as a painter.

The essence of the melodramatic plot (which contains several things mirroring parts of A Doll’s House) is that the Captain has recently heard a soldier named Nordstrom (Christian J. Mallen), accused of fathering an illegitimate child, declare that, while he did have sex with the mother, there was no way of proving his actual paternity. This, of course, was in the days before blood (the 1920s) or DNA (decades later) were available for testing fatherhood. With this seed in the Captain’s mind, it doesn’t take much for it to become an issue exploited by Laura—using the innocently offered services of the sympathetic Dr. Ostermark (Nigel Gore)--to the point that the Captain becomes obsessed with the idea that she might have conceived Bertha with another man. He goes completely crazy, has to be straitjacketed by his faithful servant/nurse, Margaret (Laurie Kennedy), and has a debilitating stroke.

Replete with the Captain’s slurs on the female sex (Greig’s colloquial text even lets him say “fuck”), this is a battle royale of the sexes, like such other Strindbergian conjugal boxing matches as The Dance of Death, in which each partner fights with as much willpower as they can muster. We see at once that Laura doesn’t kowtow to the Captain; she’s already got the brass balls that Nora takes so long to grow; she thereby represents Strindberg’s misogynistic answer to how marriage would be affected by women’s marital emancipation, which he feared would lead to a return to “matriarchy.” You understand all of Lacey’s choices as Laura and know precisely what she’s thinking, but she’s unable to transcend the sense of an actress at work.
Much as we should empathize with the Captain’s dilemma it’s hard to do so when a man, no matter how much he questions his biological fatherhood, is seemingly so willing to abandon the child he adores because of the flimsy possibility that he might not actually have fathered her. Laura actually seems a tad less complicit in his downfall than he himself; one might even consider her responsibility secondary to his own internal weakness, thus adding a touch of ambiguity that slightly reduces the thesis of the male-female conflict.
The part of the Captain does, however, give John Douglas Thompson abundant opportunities for one of those grand, old-time performances inviting him to swing wildly from fearful, childish trembling to Vesuvian bursts of furious anger, including thrashing about athletically like an unbroken stallion. His display of emotional volatility--much of it while on the floor while encased in a straitjacket--is technically awesome, but the impression it leaves is more one of a gifted actor's physical and vocal prowess than of truthful human despair.
The remaining performances are acceptable, although no one demonstrates the kind of chameleon-like transformation one looks for in repertory. Everyone looks and sounds much the same in both plays. Good work is done by Kennedy, who has little to do in A Doll’s House but brings religious zeal and maternal concern to Margaret in The Father, and Gore, whose rational, fair-minded doctor stands apart from his limping, syphilitic, yet still randy Dr. Rank in Ibsen’s play.
The Father and A Doll’s House are always worth revisiting, and the idea of pairing these two modern classics about marriage is commendable. For all their flaws, the productions are consistently viewable and smoothly done. They're accessible and thoughtful but—aside from the magnetic Thompson—neither is particularly memorable; perhaps, in fact, that's somewhat to their credit.
*The Father is not to be confused with Florian Zeller's play of the same name now on Broadway starring Frank Langella. Making the coincidence of two different plays with the same title being shown simultaneously in New York even more striking is the fact that Langella himself starred on Broadway in the Roundabout Theatre's production of Strindberg's The Father in 1996.