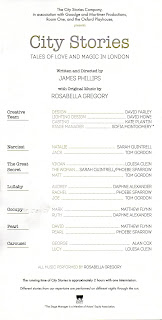 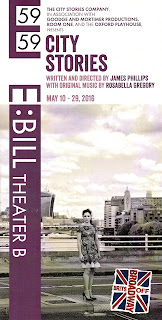 I once saw Theater B at 59E59 Theaters converted into a boxing ring with the audience in ringside seats; usually, though, the room employs bleachers facing a proscenium-less stage. For its current occupant, however, it’s been turned into a black-walled, cabaret-like environment designed by David Farley: small tables with checkerboard tablecloths and lit candles face a bare, raised stage. On it are a grand piano and a pair of metal chairs. City Stories, the evening’s title, is projected in white, stencil-like letters on the wall, just as will be the titles of each of piece on the program. If the back wall weren’t black but exposed bricks you might almost think you were in a comedy club, not an evening of contemplative, semi-dramatic, lightly comedic, romantically tinted, magically realistic, imaginatively metaphoric “Tales of Love and Magic in London,” as the evening’s subtitle puts it.
James Phillips’s City Stories, an entry in this year’s 59E59 Brits Off-Broadway Festival, is a sequence of six plays—each a bit less than a half hour—done in repertory, four at each performance. The project began with three plays, was expanded to its present number, and plans to add more in the future. A half-dozen or so attractive, highly gifted English actors, most appearing in at least two pieces, are tenderly assisted by pianist-singer Rosabella Gregory, whose (mostly) original music accompanies much of the dialogue, not unlike background music in the movies. Unfortunately for me, “Carousel,” the only play featuring Alan Cox (so wonderful in Cornelius a few years back in another Brits Off-Broadway production), wasn’t on the bill.
First came “Occupy,” which focuses on Mark (Matthew Flynn), who belongs to an order of men and women whose life work is to file and preserve, but never read, the enormous flow of letters people presumably have been mailing to God for hundreds of years. There are branch offices around the world, and Mark works at St. Paul’s Cathedral, the address for Anglicans. A lovely young woman, Ruth (Daphne Alexander), finds him and makes the unprecedented request of this meek man that he break the rules and retrieve her letter so she can change it.
In “Lullaby” (during which Gregory performs the Beatles’s “Golden Slumber”) the central character is a 35-year-old woman named Audrey (Alexander) who discovers she’s the last conscious person in London, a plague having gradually put everyone else to sleep. People have sunk into a dream state that eliminates the pains and contradictions of daily life. Only when she realizes the need to live life fully, in her case via love, can she fend off sleep and be fully awake.
“Great Secret” introduces Vivian (Louisa Clein), a singer who says she was sitting in Starbucks, enjoying her solitude and trying to write a song, when a hippy-like woman (Phoebe Sparrow) told her “You are me” and demanded she buy her book, “The Great Secret.” Vivian bought it to get rid of the strange woman, and, unable to put it down, found it contained the secret of life, which is love. The book changed her life, and she went searching for the woman, but not with the happiest conclusion.
The final piece was “Pearl,” in which the narrator is a wealthy, happily married man named David (Matthew Flynn) who was reminded by Pearl (Phoebe Sparrow), a poor, beautiful artist he saw at the National Gallery, of Marguerite, a cousin he loved but who died 26 years ago. He tracked her down, put her up in his boyhood home, and had her paint his portrait. She found the old journals in which he wrote about Marguerite (which, coincidentally, means Pearl) and, being an excellent copyist, convinced him she was his Marguerite, a deception leading to a bittersweet denouement.

The excellent actors, directed by the author himself and lovingly lit by David Howe, have the authority we expect of well-trained British thespians; given the storytelling nature of the writing, the performances border on the rhetorical, with emotions evoked but not directly represented.

Phillips’s plays, each with its infusion of fantasy, are dominated by first-person narrations that morph back and forth from monologue to dialogue. He writes a rich poetic prose, capturing the essence of places, events, and feelings, but his plays don’t follow traditional dramatic arcs, seeming more like short stories. What happens is in the past, being told to us in the present.

Faith, hope, secrets, and love are frequent references yet the polemics are vague, taking second place to mood and tone. By play number four, the meditative atmosphere begins to wear thin; trimming five to seven minutes off each play would go a long way toward keeping everyone’s eyes open. Soothing your audience to sleep is no way to run a cabaret, even a theatre cabaret.