“His Tongue Was His Switchblade” 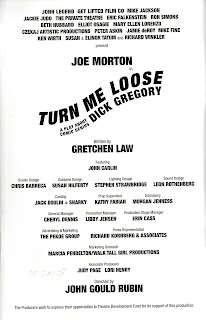 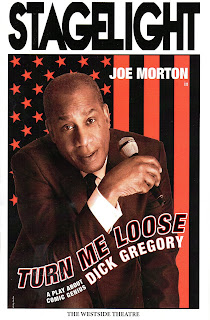 Not long into HBO’s just-aired film of Robert Schenkkan’s All the Way, about Lyndon Baines Johnson’s first year as president, Johnson (Bryan Cranston), standing in the Oval Office, says, “You hear what that nigra comedian Dick Gregory said about me? ‘When Lyndon Johnson finished his speech 20 million negroes unpacked!’” A little later, Gregory himself appears. Well, not really. It’s stage, screen, and TV veteran Joe Morton (Eli Pope on Scandal), playing NAACP Executive Secretary Roy Wilkins, who cautions against the militancy being considered by other black civil rights leaders. The irony here is that Morton just opened Off-Broadway in Gretchen Law’s Turn Me Loose, in which he plays Gregory, the African-American comedian and activist who was way more outspoken than the cautious Wilkins, and, at 83, hasn’t stopped being so. The times they may have been a-changin’ but, as the headlines still scream, they haven’t changed so much.
Morton has always been a first-class actor. In Turn Me Loose, a two-man (but practically solo), 90-minute piece excellently paced by director John Gould Rubin, he achieves greatness, revealing everything from perfect comic timing to quiet determination to raging anger, demonstrating total absorption and conviction in every word and gesture. Watching him alter his movements and speech to embody Gregory through the years from the 1960s to 2012 (with projected titles to keep the transitions clear) is a lesson from which all actors can learn. Morton, a lithe 68 who can still bust a move, doesn’t directly impersonate Gregory but he fully captures the man’s full-throated passion for the many humanitarian causes (civil rights being only one of them) that have moved him for over half a century.
His face lightly bearded (unlike the biblical visage of Gregory’s later days), and wearing a white shirt with a simple black suit and skinny tie (costumes by Susan Hilferty), Morton performs on Chris Barreca’s nightclub stage setting (perfectly lit by Stephen Strawbridge), often with a mic but just as often demonstrating the power and clarity of his unamplified voice and diction. He enacts the most compelling stories of Gregory’s life, including his schoolboy days as a star runner during the Jim Crow-era; his rising success as the first black comic to address America’s civil rights issues for mainstream audiences; the risk he took when Jack Paar invited him to appear on his popular late-night show and he refused until he wrested a path-breaking concession from the host; his becoming a nutritional guru; and, among other things, his evolution as a potent (albeit bitingly ironic) political activist, including a presidential candidacy.
As expected, the play is heavy on show business and political issues, but there also are moments of tragedy including the loss of an infant son and its emotional connection for Gregory to the murder of civil rights leader Medgar Evers; dark as some of this is, there are abundant examples of Gregory’s hilariously excoriating wit in the extended sequences during which his nightclub routines are recreated. This stuff not only isn’t dated, it’s as funny as ever, perhaps funnier, while remaining painfully true to the social evils that inspired it. As he declares, “My tongue was my switchblade, . . . my humor was my sword.”

Gregory gained popularity at the same time another highly controversial comic was riling the establishment, which is referred to in one of his routines: “You just read some of the papers—where they callin’ me the Negro Lenny Bruce. You gotta’ read those Congo papers where they callin’ Lenny Bruce—the white Dick Gregory!” Gregory didn’t shy from profanity, but was never as provocatively profane as Bruce. His claim to verbal infamy was his defiant use of the word “nigger,” which he—with the goal of defusing it—not only used as the title of an autobiographical book but said he’d name his next son with it, if he had one.

Aiding and abetting the star is the versatile John Carlin in several minor but significant roles, an old-style Jewish comedian, a Chicago cab driver taking Gregory to Hugh Hefner’s Playboy Club, a racist Southern heckler, and a deliciously subtle bit as an unnamed interviewer who’s a dead ringer for William F. Buckley. Singer/songwriter John Legend, one of the producers, also gets into the act when we hear his original song, “Marching in the Dark.”

Joe Morton demonstrates his acting greatness in Turn Me Loose. But Law’s play also reminds us that, in Dick Gregory, he has a great character on which to build. I hope New York’s awards committees remember Morton’s work when nomination time comes around next April.