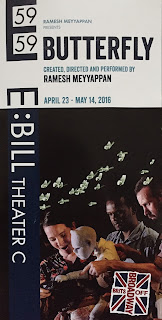 India-born, Singapore-raised, deaf theatre artist Ramesh Meyyappan’s Butterfly, which he created, directed, and in which he appears, is a sensitive, beautifully performed, but not particularly groundbreaking piece of pantomimic theatre about a love triangle involving a woman and two men. The 50-minute piece (said by some sources originally to have been as long as 70 minutes), which originated in Scotland two years ago, is part of 59E59 Theater’s annual Brits Off-Broadway Festival; it was reportedly inspired by both John Luther Long’s 1898 short story, “Madame Butterfly” and novelist Vladimir Nabokov, who was a passionate lepidopterist. A butterfly collector called Nabokov, in fact, figures in the play but only a tenuous thematic link concerning love and loss ties Butterfly to Long’s old story. Don’t go expecting anything overtly Japanese (apart from some gentle hints in the woman’s costume) or to hear Puccini-like airs.

The wordless performance, given in 59E59’s diminutive Theater C, seating around 30, features a simple set by Neil Warmington (who also did the costumes) showing a kite shop in the first half and a study with a desk and shelves lined with specimen bottles in the second. Kate Bonney did the lovely lighting. The action concerns a young woman kite maker, designated in the program as Butterfly (Naomi Livingstone, replacing the injured Nicola Darcey), who becomes involved with the Customer, an avid kite flyer (Chris Alexander), and the butterfly collector Nabokov (Meyyappan).

Using elegant movements choreographed by Darren Brownlie set to a compelling dramatic score of piano and violin by David Paul Jones, the actors portray how the two men meet Butterfly, how the Customer avidly buys her kites but is rejected as a suitor, and how she becomes enamored of Nabokov, who becomes her live-in lover. From a space dominated by kite components, representing freedom, Butterfly now is surrounded by specimen bottles for Nabokov’s captured insects. Jealousy, rape, abandonment, childbirth, and unexpected violence ensue as Butterfly retreats into the dreamlike world of her imagination and memories. We recognize that this once free spirit has herself become a bottled specimen with a tragic destiny. Perhaps feminists will see in her another victim of the patriarchy
Several fascinating puppets created by Gavin Glover figure importantly. Two are operated by the men somewhat like bunraku puppets; one is a miniature of Nabokov, searching for butterflies across the hills suggested by the gray blanket covering Butterfly as she sleeps on a pallet. The other is a larger one of Butterfly’s troublesome child, whose oddly impish face assumes a chillingly evil expression. A third represents Butterfly’s tiny babe during his highly theatricalized birth. There’s also a bit of shadow puppetry and, though they’re not puppets per se, you may gasp when the insects in the many jars begin to stir. Puppets or no, this isn’t a piece for children.
Although only Meyyappan was in the initial production, his new cast mates are as expressive as he, using their eyes to reflect a myriad of emotions. A good idea of what they do can be seen in this video sequence from the original production, which features Ashley Smith and Martin McCormick, along with Meyyappan.
Butterfly is impressively conceived and executed but there’s a slight fragrance of preciosity about it that prevents a deeper connection with its emotional currents. Like the insect after which it takes its name, it’s a thing of delicate beauty, but it flutters away before making a lasting impression.