“This Is No Idiot’s Delight” 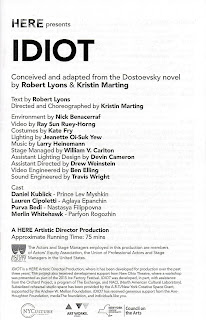 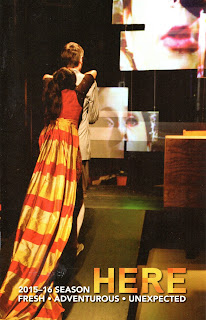 In 1924, George Mallory, having failed in two attempts to climb Mt. Everest, famously responded to a reporter’s question regarding his motives for undertaking so daunting a task by saying “Because it’s there.” Those words came to mind as I pondered why Robert Lyons and Kim Marting chose to adapt Dostoevsky’s 600-page mountain of a 19th-century Russian novel, The Idiot, into a 75-minute, Off-Broadway theatre piece. Could it have been because of the great success of another recent Off-Broadway achievement, Dave Malloy’s musical adaptation of War and Peace, titled Natasha, Pierre and the Great Comet of 1812, soon to make its Broadway ascent? Whatever the reason, Idiot, as the new work is called, is the victim of an avalanche of missteps. One hopes no Sherpas were injured in the process.
Like Natasha, Pierre . . . , Idiot focuses on its source’s romantic entanglements, which conceivers Lyons (who wrote the text) and Marting have boiled down to a four-way complex of desire, ambition, money, pride, jealousy, madness, and revenge among two beautiful women, the seductive, manipulative Nastasya Filippovna (Purva Bedi) and her presumed antithesis, Aglaya Epanchin (Lauren Nicole Cipoletti), and two men, the Christ-like, epileptic Prince Lev Myshkin (Daniel Kublick) and his unstable rival, Parfyon Rogozhin (Merlin Whitehawk). Everyone else in Dostoevsky’s swirling panorama of mid-19th-century Russian life (the book originally was published in 1868-69), has been eliminated, and there’s barely any context for the events depicted.


If you don’t know the book (and even if you do) you’ll often be adrift since what occurs over Dostoevsky’s complex course of events has been condensed into a simplified—but nonetheless ambiguous—narrative with a vaguely outlined time span. The thinly dramatized characters express their feelings in contradictory ways that offer little insight into what they really mean, the transitions seem arbitrary, there are philosophical and religious digressions that add little of interest because they come and go at will, and by the time the piece ends you feel as if years have passed, not a mere hour and a quarter.
Making Idiot dramatically duller is director-choreographer Marting’s staging of it as a semi-immersive, multimedia, avant-garde event, performed in Nick Benacerraf’s “environment.” The audience, welcomed to their seats by the Prince, is arranged around a square rug at center with four matched runners—lined by light strips—leading from it to four acting corners surrounding the space, each with its curtain of luminous strips. Four flat-screen video screens over the central area show a wide variety of images (credit: Ray Sun Ruey-Horng), both prerecorded and those taped during the performance by the actors themselves. Because you’re seated on metal folding chairs, you often have to strain your neck and swivel to see scenes acted to your rear. Not having remembered to bring eyes for the back of my head, I was forced to ignore, visually, at any rate, much of the tragic final scene.
One corner contains a sort of photo-booth where scenes occurring behind its curtain are visible in snapshot-like black/white images on the overhead TVs, while another corner has a karaoke platform on which the women sing, including in Russian; Cyrillic subtitles run beneath their projected images, even when their words are in English. And, despite the low thrum of Larry Heinemann’s electronic music, almost always heard in the background, don’t expect anything like the exceptional score for Natasha, Pierre . . . , or even quality singing. Cipoletti can at least carry a tune, but someone should be punished for requiring Bedi to sing. Marting also has incorporated several scenes of dancing whose only benefit is offering a temporary reprieve from the characters’ fuzzy ramblings.
All the actors are capable and attractive, but none can do much with their confusing roles. Only the attractive technical and design elements, including the imaginative, mixed-period costumes of Kate Fry, register, albeit as seemingly unnecessary distractions from the inadequacies of the script.
The Idiot has received multiple adaptations for films, TV, and the stage, so there surely is material in it that can appeal to audiences through physical enactment. But just because others have climbed this mountain before doesn’t mean anyone can do it, not even if only because it’s there.

Idiot
HERE Arts Center
145 Avenue of the Americas, NYC
Through May 21